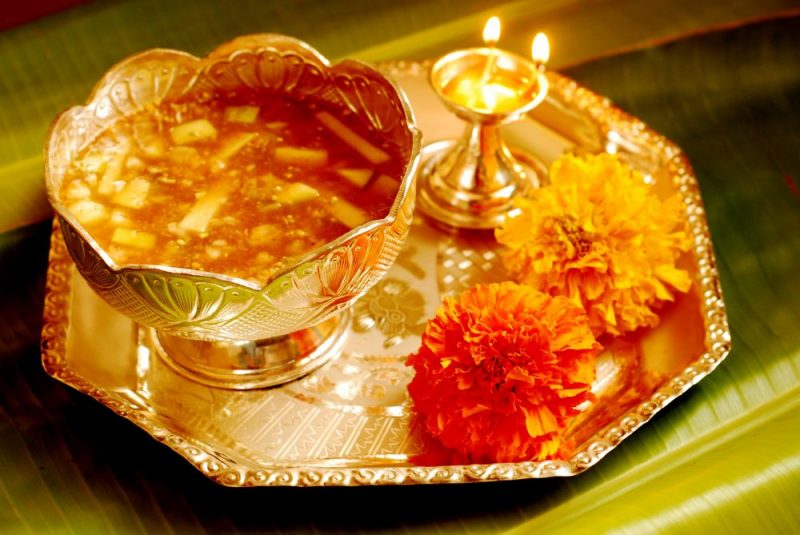 A festival of summer, Ugadi( also known as Visu in Tamil Nadu and Kerala) is one of the most looked-forward-to summer festivals in India. Also known as ‘Yugadi,” which literally means, ” Start of a new ‘Yug(Era in Sanskrit),” this festival marks the beginning of a New Year in the Southern states of Tamil Nadu, Karnataka and Kerala.

Ugadi falls on the first day when the moon’s orbit undergoes a change. Festivals in India follow the Indian astronomical charts, and Ugadi is celebrated a day after the first new moon and after the sun passes the celestial equator on the spring equinox.

How do we celebrate Ugadi

Ugadi is incomplete without the “Ugadi Pacchadi. ” Every festival in India begins with a refreshing oil bath and hair wash ritual, known as Abhyanga. The benefits of Abhyanga(rooted in Ayurveda)  have been studied widely and is identified as one of the most non-invasive and relaxing ways to maintain good health.

Also, every festival brings with it a slew of specialities that are particularly identified with the festival. The “Ugadi Pacchadi” requires 6 ingredients-  Raw mango, Neem, Tamarind, Jaggery, Chilli and Salt. Legend has it this amalgamated dish serves as a perfect representation of life itself-  happiness, sorrow, anger, bitterness, surprise and fear. Today, social psychologists and behaviour therapists insist that every emotion needs to be welcomed for good emotional health. This ritual serves as the perfect understanding of the importance and the inevitability of every human emotion.

Ugadi celebrations also include an almanac reading out of ‘Panchangam’ by the eldest member of the family or a learned priest, who takes the role of an Oracle giving out predictions for the upcoming year. Marking the beginning of a new era and a new Hindu lunar calendar, the festival of Ugadi is celebrated on the first day of the Chaitra month in the states of Tamil Nadu, Kerala and Karnataka. It is believed that Lord Brahma, the creator of the Universe created days, months, years and the vital elements of nature.  The predictions are based on the moon signs and accompanied by hymns and chants to charge up the air.

Also see: Sri Ramanavami: Why do we celebrate it the way we do?

Ugadi Pachadi: Made from raw banana, raw mango, neem, tamarind and jaggery, this delicacy is prepared by many people. It is believed that one should not taste this dish unless offered to the Gods as an offering( Naivedyam). The use of raw mango almost serves as a precursor to the most-loved thing about Indian summers- Mangoes. Tender need flowers used in the dish help clean out the gut of toxins and work as an antibiotic for the upcoming summer heat.

Pulihora: Prepared with cooked rice, besan, urad dal, cashew nuts and peanuts, this delicacy is among the favourites of the people celebrating this festival.

If you wish to try your hands at other delicacies of this festival- http://www.sailusfood.com/ugadi-festival-recipes/

The festival of Ugadi can be celebrated with all your loved ones. Children will have a blast helping with the preparations.  Here are some ways that you and your children can celebrate this occasion-

Make those greeting memorable: Make the wishing rounds with your child(which can be utterly excited, especially if they are all decked up. Also, hand-made cards by kids make the perfect keepsake gifts.

Rangoli making: Clean out your front yard to make your artwork dazzle!

Make the lunches memorable: One of the primary functions of a festival is to get together and the love- and food!

Culture, Wisdom in our festivals

Navratri and festivities- How you can make the most of them with your kids and family!

Quirky Products, Wisdom in our festivals

Culture, India, Wisdom in our festivals

Why do we celebrate Sri Ramanavami the way we do?