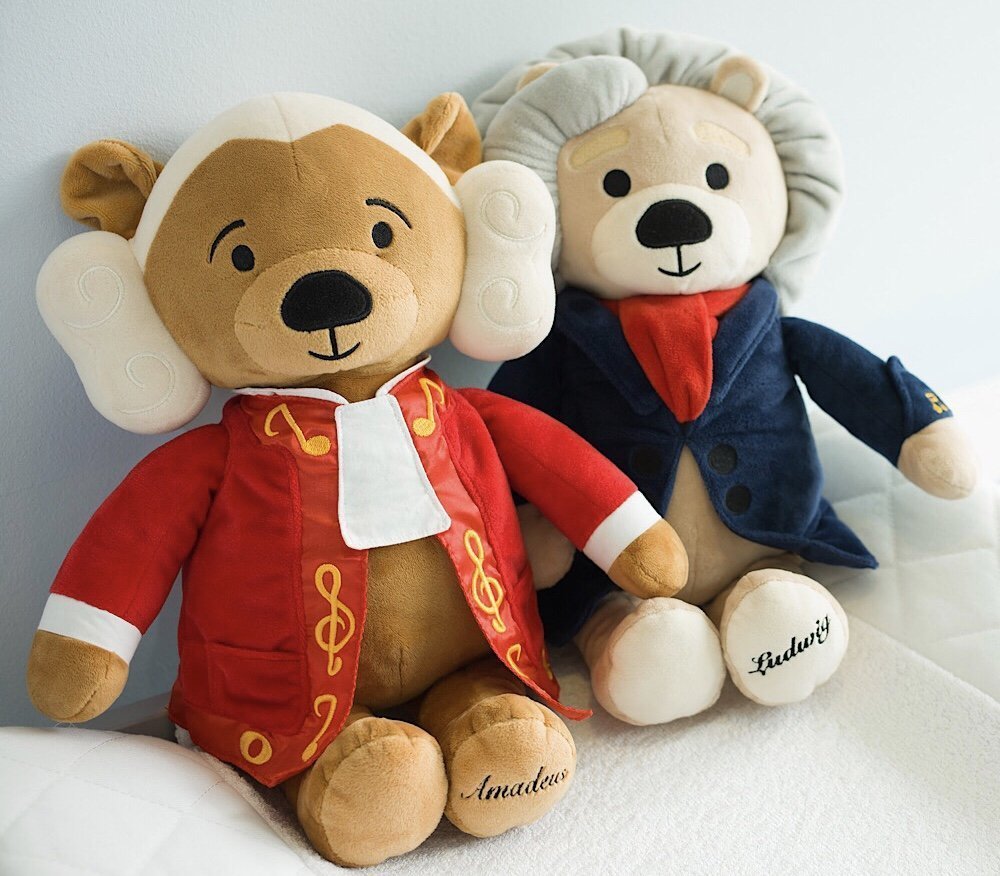 Virtuoso Bears are a new line of musical plush toys that familiarize children with the classic melodies of iconic composers Beethoven Mozart. These musical melodies are precisely the sounds that every newborn should be hearing. Piano concertos or lush symphonies relax children (and new moms) while inspiring a lifelong affinity for music. The initial two teddy bears in the line are dressed in period clothing with a hidden switch that can play seven tracks of their namesakes most recognized melodies.

The two bears that launched the line retail for $49.99 and are modeled to resemble Amadeus Mozart and Ludwig van Beethoven. These cuddly pals carry forty minutes of carefully selected tracks of sonatas, concertos and symphonies.

A product from parent company Vosego of Singapore, the brand recently debuted a website for American audiences at www.vosego.org. Here you can sample pieces of the classical tracks, zoom in on the rich details of each bear and learn the many benefits of listening to classical sounds. Amadeus and Ludwig.

Each bear is easy to operate with all functions controlled with one button. Volume control is important and safe for infants’ ears as it can play softly for naptime and strongly for wide-awake play dates. The music device is safely concealed in an interior pocket. Each bear has a short biography of their namesake artist tucked inside the inner pocket, giving families an entire experience of music plus the bear resembling the composer and his life story. A bonus for caregivers — these bears are easy to clean. Simply hand-wash your bear after removing the music device.

Playing classical music during the final weeks of pregnancy, according to Vosego’s research, creates a relaxing atmosphere. Once baby is settled at home, Virtuoso Bears create a stress-free environment for parents and baby as the lush soundtracks play. As baby and the bear bond into the toddler years then childhood, each family member discovers that music makes precious memories and more. Imagine mother and infant listening to Virtuoso Bears while breastfeeding. Baby is developing good habits of focusing on the regular harmonic sounds and longer time scales. In fact, classical music offers less direct repetition than other genres of music. Children are drawn into music they are listening to and it blocks out external noises. They essentially create a calming effect by releasing pleasure-inducing dopamine and inhibiting the release of stress hormones. At around 24 weeks, the baby’s ears are rapidly developing in the womb. Introducing newborns to classical tunes produces a can brighten their mood, stimulate their brains, and build bonds with their parents.

This all makes perfect sense to Virtuoso Bears inventor Joanna Skubisz. She came up with the musical bear concept when, as an adult, she decided to resume piano lessons — after a 20-year gap. She was surprised how hard it was to pick up where she left off! An a-ha moment came just as she was preparing to have her first child. She wanted a musical toy that played a full-length classical tune wrapped inside an iconic plush toy. Seeing none, she invented one!

Joanna recently discussed the invention process and more via an exclusive interview. 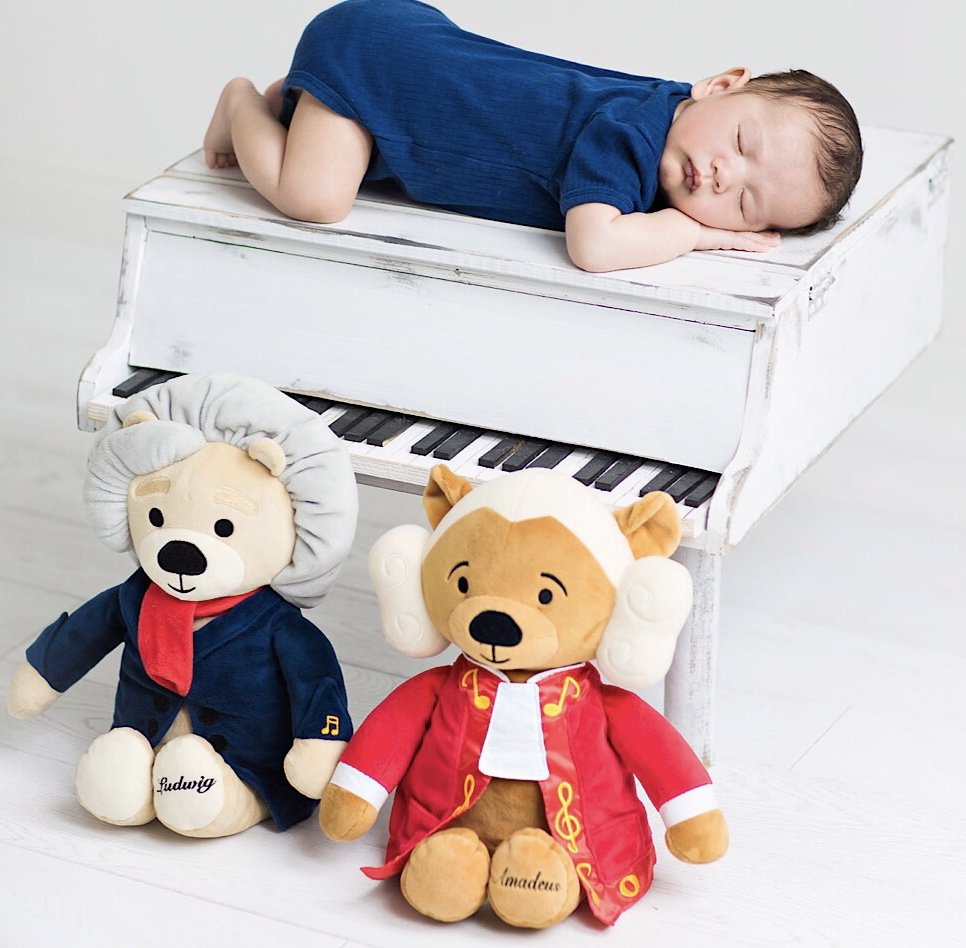 Meagan Meehan (MM): How did you initially get interested in classical music?

Joanna Skubisz (JS): My mother used to play classical music CDs when I was young. Whenever I hear Ravel’s Bolero I immediately think of her. Bolero has the same theme being repeated eighteen times, but each time a new set of instruments is added. It was fun guessing and naming the instruments.

MM: How did you end up designing toys and why did you select teddy bear characters to depict Mozart and Beethoven?

JS: Becoming a toy inventor was my childhood dream. I would let my imagination go wild and often draw fantasy characters or create DIY board games. It was around the time when I became pregnant with my baby boy that I decided I wanted to finally pursue a career I have always desired. What really mattered to me was to have work that offers me greater flexibility to spend time with my family. Far from being content to just become a stay-at-home-mum, I was determined to take a plunge into the challenges of mumpreneurship. Teddy bears exude a classic, elegant look and feel. Hence, they are perfectly suited to depict the featured composers. Teddy bears are among one of the most popular plush toys in the world. The teddy bear is a timeless figure, so very naturally it works well playing timeless music such as classical tunes.

MM: How much research went into your decision to create these Bears

JS: When the idea of Virtuoso Bears crossed my mind, I immediately checked whether a similar product had already existed. I even travelled to Salzburg, Austria – a city where Mozart was born – to satisfy myself that a plush bear which plays Mozart’s compositions was not already sold in the market there.

My research further led to some interesting discoveries. On the one hand, I came across articles describing the benefits of classical music on children’s development; yet on the other hand, I encountered a number of written views lamenting the relative difficulty of making classical music (which may be perceived as something reserved to the taste of elites and confined within the grand philharmonic walls) more attractive and accessible to children at their young age. Pondering over my findings, I finally decided to give it a go and create Virtuoso Bears.

I’ve also analyzed reviews of toys sold online, written by parents. I noticed that wash-ability was an important consideration. Many music toys are not washable because they contain electrical components within which cannot be removed. In this regard, the Virtuoso Bears music module can be easily taken out via a pocket so that the bear can be completely immersed in water and cleaned. Another important feature that I have decided to incorporate was volume control. The Virtuoso Bears’ melodies can be easily adjusted to play softly for naptime and strongly for wide-awake play dates. Lastly, many parents complained about the relatively short music playtime that existing toys have. By contrast, the Virtuoso Bears each play seven compositions which makes a total of forty minutes of music playtime.

MM: Were you surprised by just how beneficial classical music can be for infants?

JS: I was indeed surprised by the sheer number of benefits that classical tunes offer to the smallest of the human audience. Music is one of the most human and powerful of languages. It stirs our souls and lifts our moods; yet the benefits of music spread far beyond that, as exposure to music can positively affect our health, well-being and cognitive development. Foetuses develop hearing abilities in the womb as early as sixteen weeks, and they do react positively to fine, delicate music played to them. Studies even suggest that they can recognize the melodies after birth and are capable of being comforted by the familiar tunes. Music stimulates babies’ brains in a way that enhances emotional and educational development. Classical music is especially beneficial because it offers a greater variety of musical subtleties than other music genres. Research has also shown that musical training, especially before the age of seven, can help increase brain volume and boost brain functions.

MM: What was the actual creation/materials and marketing process for these bears like?

JS: First things first, I made sure that I could name the bears – Amadeus & Ludwig – after Mozart and Beethoven. Secondly, I personally curated a fine selection of musical recordings which I wanted to be included in the bears. The designs of the bears, music modules and packaging were carefully drawn up in close collaboration with artists and experts based in California, Belarus and Indonesia. Add to the mix my two-year savings, perseverance and a supportive husband – that’s all I needed to get things running!

MM: What kind of feedback have you gotten about these bears from consumers?

JS: Many people see Virtuoso Bears as a great baby shower gift – and I think they are spot on. As mentioned earlier, babies in the womb can hear as early as sixteen weeks old and recognize the melodies after they are born. One of the most memorable episodes I have encountered so far was a case where a grandfather sought to purchase Ludwig as a gift for his grandson before his grandson undergoes a complicated health procedure. It was really touching for me to realize how much the bear meant to both the grandfather in encouraging and cheering his grandson on at such a critical moment.

MM: What are the challenges of being a toy inventor?

JS: It is important to find a right balance between what parents believe is good for their children and what children want and enjoy. With Virtuoso Bears I aimed to create a toy that both parents and children can enjoy. Because of its timeless appeal, the idea of incorporating classical music into a toy seemed like a perfect solution. There are already plenty of challenges in creating a physical product, let alone a toy which has to meet a plethora of safety regulations that oftentimes vary from country to country. Virtuoso Bears are absolutely safe to use for children from birth, as they do not carry any hazardous elements. The maximum music volume is capped at a level that is perfectly safe for infants’ ears and the music module’s battery compartment is concealed screw-tight away from direct exposure to the skin.

MM: Overall, what are your biggest goals for the future of the line? For instance, what other musicians might future bears serve as odes to?

JS: My current biggest goal is to expand the Virtuoso Bears Collection further by adding new plushy composers to the range of bears I have. I have strong sentiments about Chopin since he is my fellow countryman from Poland and his piano compositions are stunning. Another strong candidate is Brahms – perfect for lullabies before bedtime. Stay tuned!

To get 20% of the price of these bears, use the code RPRXE63T , on Amazon, by clicking here and here. 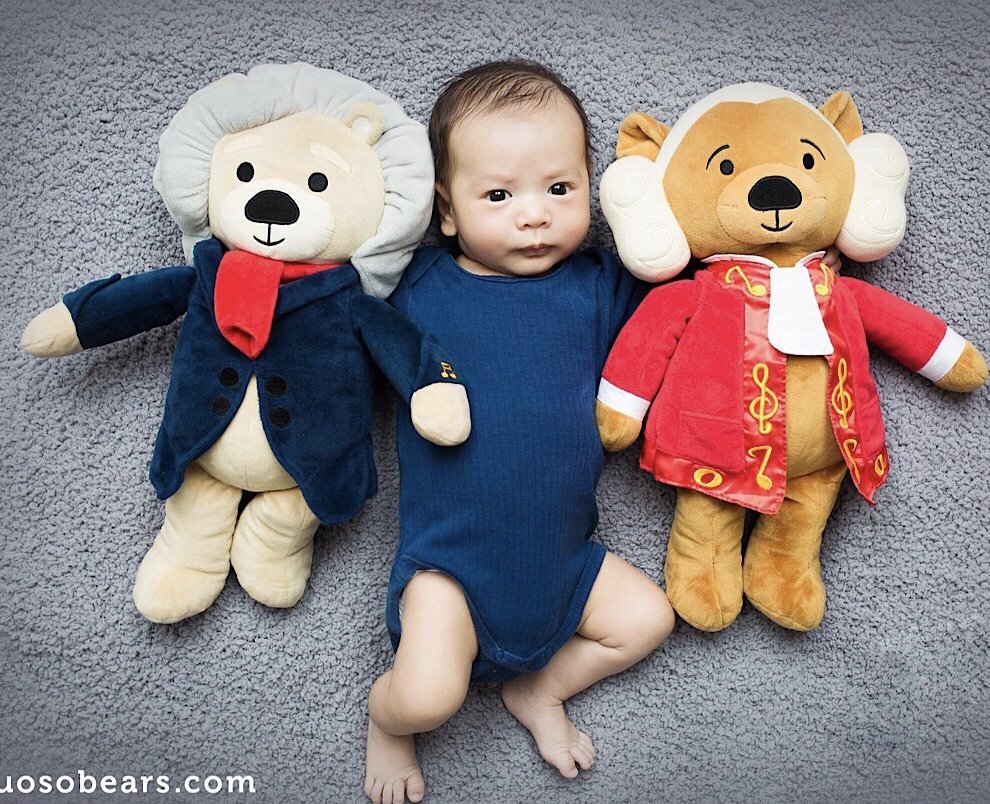 Virtuoso Bears play classical music which is good for small children to hear.