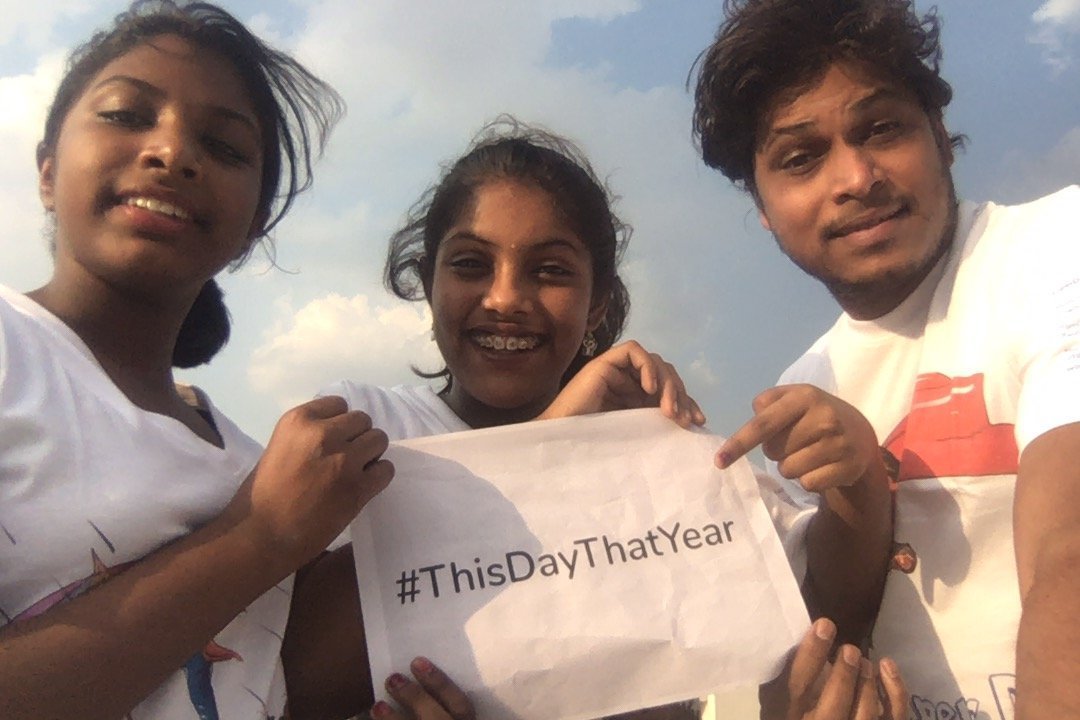 If the lockdown has done any good to me and the girls, it is this!

The Girls and I dabbled in multiple things, exchanged lots of ideas, and then, one fine day, our eyes fell on this wonderful book called Mad Science from Wired.

Recommended in 2015 by a good friend of mine, this book is an amazing collection of what happened this day in history! Now, the girls and me, we are all history and tech lovers, so we started skimming through the book. While turning pages we realized that this book cannot be read like a typical book. One page a day, that’s the recommended dose, both to learn new things and allowing the idea to sink in.

April 22nd, 2020: We decided to jump in and make a cool video (that was THE idea!) of presenting facts from Mad Science and also do a follow-on with some interesting discoveries and inventions. We started brainstorming and ideas poured in. The girls started talking about big rigs, light setup, etc….Whoa, whoa, whoa! I had to tame their horses before it went wild 🙂

We decided we will do a short video (about 2-3 minutes) to present the facts. Ameya, the younger-one, would do the reading from Mad Science, and Ananya, the elder one, would do the honors of follow-ons. Once the idea was set, we started shooting with MacBook, phone, and all the camera-attached gadgets at home to check, which fits the bill of quality! With all the trials and bloopers (some of which you will see in the attached video!) we managed to shoot the lot for April 22nd, but three minds couldn’t put together an edited version right in time to be released for 22nd April. Add to that, the galore of input, fights, and opinions we had to share, which made it look a Herculean task to complete the video. We shelved the idea of releasing the video for April 22nd as we were way past into the 23rd of April and we’re still debating lighting, script, and what to present! You see we always agree to disagree 🙂

April 23rd: We got up around 11 am and made it a point that we will release the video no matter what! We did some interesting shoots of jumping from the terrace and landing on the couch (puerile attempt though!), some hysterical peals of laughter, and more… By evening we were convinced that we had shot the best and had enough footage to showcase. Now the editing was the daunting task with two little minds clamoring to present their ideas, input, and what to edit or what not! I was splitting hairs (lockdown gave me more, so I did not go bald!) and was getting angrier by the minute with each input! But then, we chose to release the video and so an earnest attempt was made in compiling the final version. Though not the best, we had to get it out! And on dot at 11:59 pm, we managed to complete and upload the video. Presto! Bravo! Eureka! We finally had our first video on #ThisDayThatYear uploaded and shared. To garner viewership, we troubled all of our friends and family to view it. The response was great!

April 24th, 2020: We improvised and shot the video at dusk. The golden yellow Sun did some magic on our faces. We managed to edit and post it on time.

April 25th, 2020: The third in the series got unduly delayed. I was the unappointed scriptwriter as the girls comfortably threw the task at me! 8 pm – I am still scratching my head what to write (not a great scriptwriter as its not a profession I belong to…) and how to present. Finally, I managed to put something together and the sunlight was gone! We had to improvise with a 100Watt incandescent lamp and create the orange lighting for us. The shoot went smoothly. Elder one, the stickler for details, was happy. The younger one did a fab-job on delivery and I introduced the bloopers as usual 🙂

Three days in a row and we are now determined to do this every single day for 365 days. Come what may we will release and compile it as its good fun, great knowledge sharing, and more importantly, it was satisfying for all of us! We hope you will enjoy the series and will share the goodness too.

Here are the three in series that we have released as of now. If you like them, share them. If you love them, support us here!

Please leave comments or feedback below or in our Youtube Channel!

Multitasking With Kids? Try These 4 Questions To Actually Get Things Done