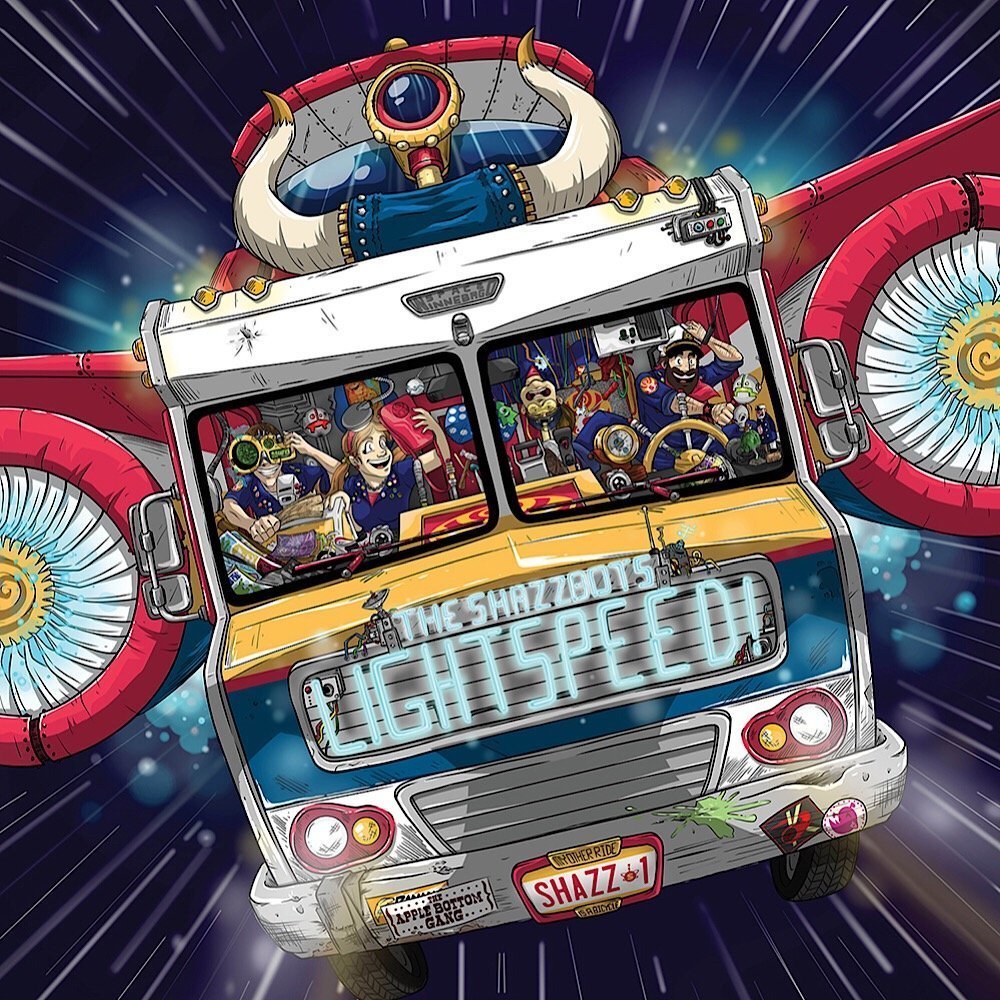 The Shazzbots are a band that makes fun family-friendly music.

The Shazzbots are a triple Emmy Award-winning kindie band, powered by their intergalactic rock ‘n roll persona and carrying a payload of irresistible, surefire, supersonic hits. The Shazzbots proudly announce the March 1, 2019 launch of their much-anticipated third album, LIGHTSPEED!

Twice voted “Best Band in Columbus” by readers of Columbus Monthly, the interstellar crew members of The Shazzbots perform under the guise that they travel the multiverse to play rocking tunes for the entire family. They vow, with every mission, to perform songs that push the boundary between kids’ music and adult music, not just to entertain children, but also to inspire their creativity, curiosity, and sense of wonder.

Ian Hummel, founder of The Shazzbots, recently discussed the band via an exclusive interview. 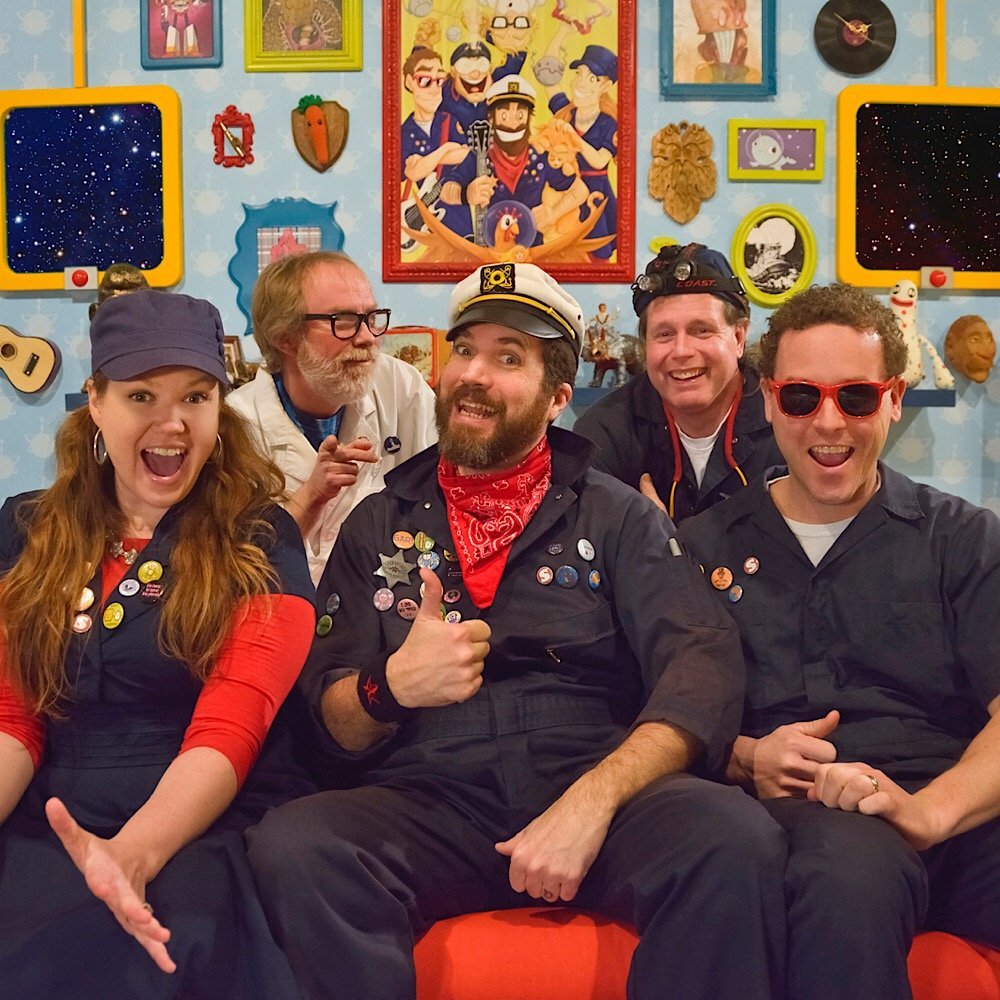 Meagan Meehan (MM): How did you initially get interested in music and how did you focus on kid’s music?

Ian Hummel (IH): My father was in a local country band called Rainbow Canyon. From as early I can remember I was surrounded by his music as well as the many country artists he loved. There was almost no way I COULDN’T be into music, both listening and performing! My first band was started in our basement with my two step-brothers. Once I started playing with them, I was hooked. I knew this was what I wanted to do with my life. It’s the only thing I’ve ever been good at! After playing in a number of bands of all musical types, I was looking for something new and different to sink my musical teeth into. I noticed all of my friends were having children and not coming out to shows. So, I took a look at the kids’ music landscape at the time and found it wanting … especially of any sort of substance or heart. It seemed very inane. Talking to my parental friends, I found that there was virtually nothing for the whole family to enjoy. Nothing that didn’t make the parents go half-crazy from listening to it over and over again. So I made that my new mission… To create REAL music by a REAL band for REAL kids (and their parents)!

MM: How did you form your band and select your name?

IH: So, after deciding on making children’s music, I sat down to see if I could even write kids’ songs. My imagination went wild, and I found I had a knack for writing these types of songs. I wrote one (“Tugboat Parade”) and then another (“My Cat’s Name Is Peanut Butter”) and another… Before I knew it, I had 12 or so ready to go. I knew I wanted to be more than just a dude with a guitar. I wanted to play a character. I wanted to put together a full band of characters. I love the idea of a good team up. Whether it’s a superhero team like the Avengers, or a band, I’ve always liked the collaborative musical experience. There’s an archetype in a lot of action team cartoons (Battle of the Planets, Voltron) that has a specific dynamic. There’s the leader, the second in command who’s a lot like the leader but a bit more of a bad boy, the female presence, the big guy, and the little weird one. So, I set out to put together a band/team/crew with that dynamic. The first member I recruited was a writer friend of mine who also played the bass (Navigator Scopes AKA Mike Heslop). He helped me flesh out the concept of these characters and this group. And borrowing from the ‘70s show, Mork & Mindy, we found our name in an exclamation Mork (Robin Williams) used to yell… “Shazbot!” We added an extra Z and an S at the end, and the Shazzbots were born!

IH: As I said, I have been playing in Columbus and around Ohio for the entirety of my adult life. However, that was mostly in the late-night bar scene. Getting burned out on that, this project seemed like the perfect departure from the nighttime drunk fests of the gigs I had been playing. However, figuring out the gig path of a kids’ band took some doing. We reached out to and performed free shows for anyone and everyone we could think of. The Ohio State Fair was an early gig. Marathons and private parties were played. Finally, we were able to hook up with the Columbus Metropolitan Library and did multiple tours of many of their branches to promote summer reading. The name and our act got out, and we’ve been working steadily ever since! From festivals (Columbus Arts Fest, Nelsonville Music Fest) to libraries all over the state, we’ve seen a million families and we’ve rocked them all!

MM: You have a super creative back story where you tell kids that you travel through space playing gigs. So, how did you come up with that storyline and how has it been received?

IH: The idea of a space-faring rock band came to me almost from the beginning. As I said, I didn’t want this to be Ian Hummel – Children’s Entertainer. I wanted something more, something exciting for the kiddos to get into. Drawing from my love of comic books and cartoons, I knew I wanted my band to be a team. I wanted them to be a crew of a spaceship! So, I set about creating characters with fleshed out back stories. I knew that outer space provided the perfect palette to create our universe on. The stars were the limit! More characters and worlds and creatures came to me (and still do!) and the universe of the Shazzbots took shape. The kids and families love it. So much, some kids dress up like us for Halloween. It adds multiple layers of imagination and creativity that the kids really immerse themselves in.

MM: Are you big fans of sci-fi overall?

IH: Of course, sci-fi-fi is a big influence on us (especially Scopes and I). We’ve got a little bit of Star Trek, a dash of Battle of the Planets and the like, and a pinch of Spaceballs all woven into the fabric of our inspiration. We all love sci-fi-fi movies and TV. Scopes is an avid reader of science fiction novels. And I absolutely LOVE comic books about any and all subjects! So yes, big fans.

MM: What inspired the songs on this new album and have you any special favorites?

IH: A lot of the songs on this new album we have been playing at our live shows for years. We had put recording on hold for a bit to focus on the filming of our TV show pilot, “We’re The Shazzbots.” So, going into the studio, we had quite a few songs we knew we wanted to be on this record. We also knew we wanted this one to really ROCK. We set about pushing the limits as to how rocking a kids’ album could be. And I believe we came to a very strong conclusion with LIGHTSPEED! “Read A Book Today” is the oldest song on the album, and one I wrote for the many libraries we’ve played. It’s an important message and something close to all our hearts. “On The Playground” and “Beauregard Ogilby Balderdash” are also songs we’ve been performing for a while, and we’ve seen how well they go over in that live setting. Newer songs that we haven’t played out much like “Clean Plate Club” and “My Pa’s Fun Truck” were fun to record because we really got to flesh out the sound of them in the studio. “Gravy Boat” is the only song on any of our albums that wasn’t written by me (or another band member), and it’s a song we close almost every show with. Written by musical “brother,” Zach Whitney, it holds special meaning for him and us. I love how pretty “Very Very Vivian” came out. Although it’s about a specific mom and daughter, I think the message is universal to parents everywhere. Perhaps my favorite song on the album is one I’ve been sitting on for a while and have never played out, “I Think I lost My Dinosaur.” I love how it turned out on this record. It sounds like nothing the band has ever done before. So simple. So fun. So retro. 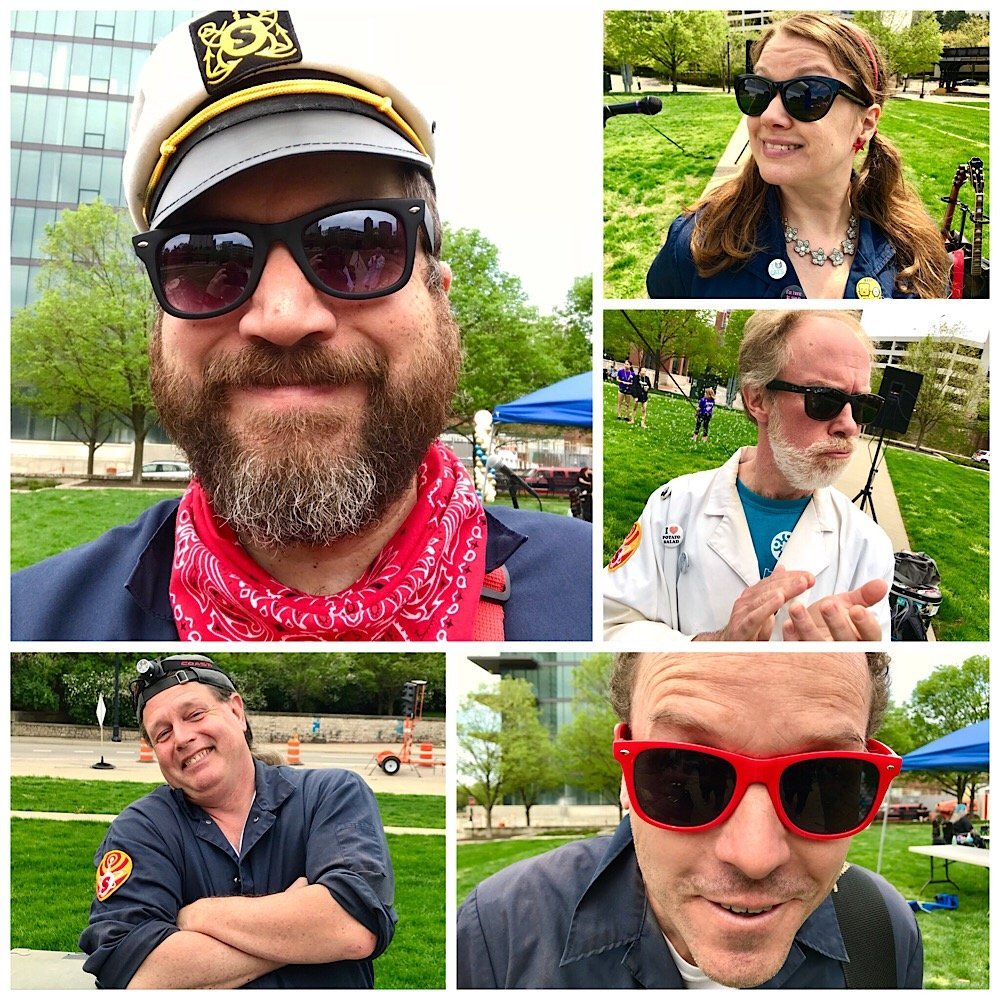 Snapshots of The Shazzbots!

MM: How did you plan out the costumes, sets, etc., and what can audiences expect from your shows?

IH: The costumes were born out of necessity. I knew I wanted a uniform look to the band, and money was tight in the beginning, so we bought work coveralls. We outfitted them with patches and pins and other “flair,” and now they have become our signature look! Making our TV show with our amazing visual artist, Joel Jackson, really brought the vision that I had in my head to life. The world I had been creating in my dreams became a reality! The backstories that we had created for our characters, that we couldn’t really get into at our live shows, were made real and explored! We won three regional Emmy awards for our pilot, so I really believe this is a universe that we’ve created that audiences would want to visit. As for our live shows, we are really just a rock and roll band for kids and families to get down to TOGETHER. We encourage full family dancing and clapping and stomping and singing. We have brightly colored and well-designed backdrops and signage that we’ve been using recently that have really enhanced our live look. We are also developing an experiential theatre show that we are planning to launch around the national release of LIGHTSPEED!

MM: What experiences do you hope fans take away from this album

IH: My hope is that the kids, the parents, the grandparents, the aunts, the uncles, the FAMILIES get into this record. Listening, dancing, singing along together. We really wanted to make a real rock record for kids. Further, we are also releasing this album on vinyl. Being a vinyl record fan, I have seen a lot of parents looking for family music in that format. There’s really nothing out there made for kids on vinyl. We have made exclusive and amazing art for this version, to really get the kids involved in the listening experience. I see the vinyl version of LIGHTSPEED! as the culmination of our aesthetic. It’s music and art in one package. It’s made to get the kids engaged in what an album really is. It’s not just a collection of songs on the computer. It’s a real tangible thing. Vinyl is what more and more people are going back to. It’s all about really listening and being engaged in what the music is saying. It’s so much more enjoyable than a compressed digital track on Spotify. All music deserves better.

IH: Here’s our band line-up in case you need it…

LIGHTSPEED! will be available at iTunes, Amazon, and other digital retailers, as well as at select specialty stores in the Columbus, Ohio area and www.theshazzbots.com 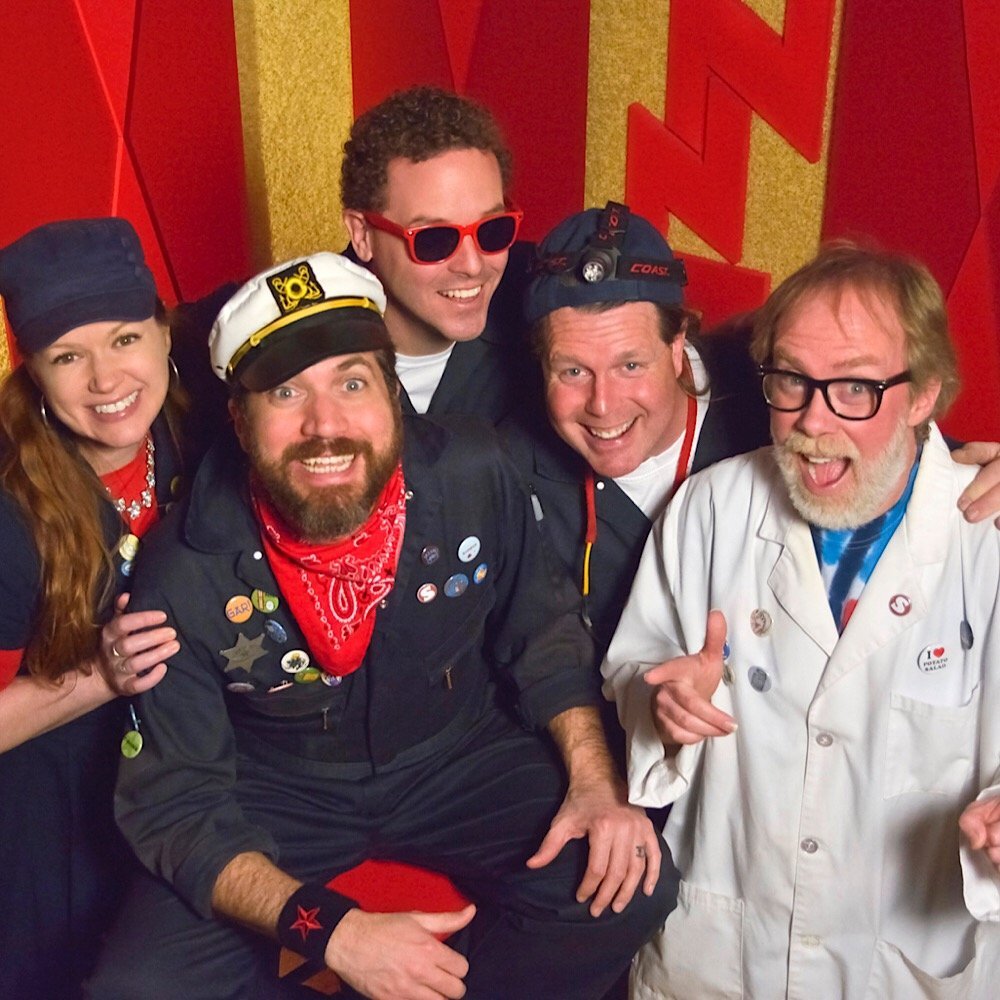 The Shazzbots have a fun sci-fi backstory.