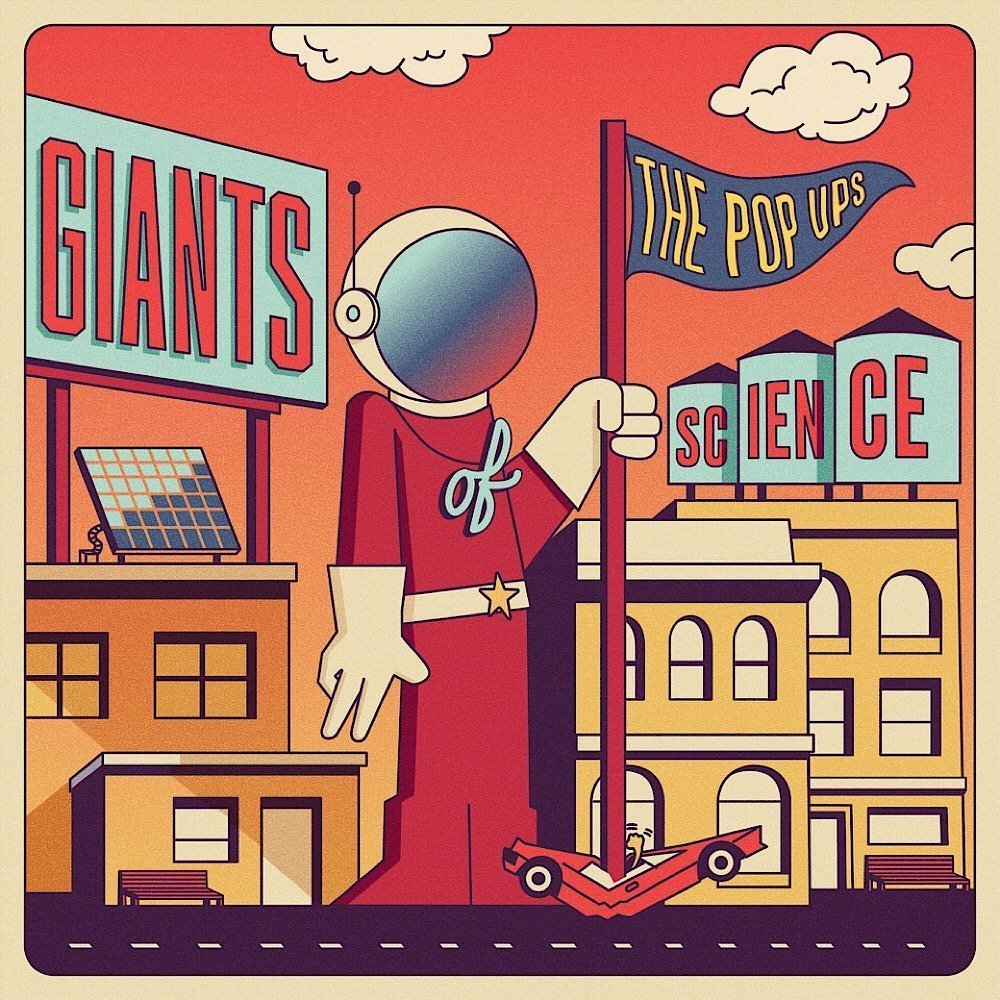 The Pop Ups just released their ‘Giants of Science’ Album.

The Pop Ups are a musical duo who just released a cutting-edge collection of songs with hot beats and cool science that’s sure to get entire families feet moving through the medium of psychedelic synth pop. With goofball humor and profound head bopping, “Giants of Science” is determined to turn listeners into the next generation of innovators.

The Pop Ups will celebrate the release of this album with a special concert at Brooklyn Bowl on May 20. The show will include a full electric band and create a cosmic journey into time, light and space with their hilarious cast of puppets creating a truly unique experience.

So, who are the Giants of Science? They are the people that make us all safer, healthier, more informed. The people who discover light bulbs, antibiotics, record players, airplanes, zero emission vehicles: things that make our lives better. The Giants of Science move humanity forward. This album is about honoring the process of discovering truth through theorizing and experimenting, and never giving up.

On their 5th album, the energetic duo have mastered their euphonic energy. Here more than ever it feels like they have created for all-ages. The educational elements of “Giants of Science” are sure to appeal to youthful inquiring minds and their STEM seeking parents. With musical stylings that could go toe to toe with anything on contemporary radio; influences ranging from Migos to Chromeo, to LCD Soundsystem; this album is sure to turn the heads of the older generation while attracting the younger set with its vibrant excellence.

Kicking off the party, the two princes of Pop start with “Shadow”. In the vacuum of space, light goes on infinitely until it runs into something. What would happen if it ran into you? Special guest star Grammy winner hip-hop artist Secret Agent 23 Skidoo steps in to help catch the light, make a shadow and drop some beats. With “Inventors” the band puts a call out for the next generation of great inventors and takes a look at two brilliant women who changed the world by working hard to see their ideas through. A reminder that anyone can be a great inventor and that even the simplest idea can change the world. On “Time”, while addressing the pressures and limits of time, the duo thinks they may just have discovered a helpful and effective way to time travel. Moreover, who hasn’t dreamed of what it would be like to climb into their own rocket ship to explore the unknown wonders of outer space? “Space Adventure” tells the tale of Jacob and Jason taking a trip to Mars. The epic anthem “Meteor Dinosaur” shares the story of Dr. Bronc, a brontosaurus astronomer working to save the world from the infamous meteor. On the inquisitive song “How Do We Know?” The Pop Ups ask a real scientist, Dr. Amanda Simson, a pile of science related questions that they are looking to understand. It wouldn’t be a true Pop Ups experience without a robot. “Synthesizer” tells the story of when Jacob and Jason snuck into Synthbot 4000’s music studio and discovered sound is made of waves of different shapes. Learn some dance moves by drawing synth sound waves on this most excellent track. Providing fun ideas for at home science exploration are the concepts behind “Mirror” and “Cave of Wonders”. Hold up a mirror to a mirror and you’ll look be able to look into infinity or take a flashlight to a gem and see if you can make your own disco! Closing out the album, The Pop Ups wind it down while explaining about the amazing things that go on with our bodies at rest on “Science of Sleep”.

A collaboration between Brooklyn musicians Jason Rabinowitz and Jacob Stein, The Pop Ups have been setting the standard for children’s music since 2010. A celebration of making, building, and learning, their album ‘Appetite for Construction’; received a 2014 GRAMMY nomination for Best Children’s Album, alongside a National Parenting Publications Award, Parents’ Choice Award and praise from NPR’s All Things Considered, The Huffington Post, and USA Today among others. The boys have toured with Yo Gabba Gabba Live and continue to perform their rock and roll puppet musical live show to sold out audiences across the U.S. 2015 saw the launch of The Pop Ups ‘Great Pretenders Club,’ album and video series which was made available exclusively on Amazon in 2016. That same year, the band joined up with the creators of NPR’s hit podcast “Wow in the World” for the show’s theme song and starting in 2017, The Wow in the World Pop Up Party, a science and music themed live show based on the podcast will be on tour to select cities around the country.

Jason Rabinowitz recently discussed this album and more via an exclusive interview.

Meagan Meehan (MM): You guys are becoming super famous, when you started did you ever think you’d get this big, with this many albums, awards, and platforms?

Jason Rabinowitz (JR): Aw geez- that’s a generous way to put it! As far as we’re concerned our attitude has always been just trying to make things we love and hold dear- so as for success, all we’re trying to do is to keep that momentum going and hope our work gives people something of value.

MM: Why did you create “Giants of Science” and Which songs on it do you like most?

JR: Giants of Science kind of evolved naturally into an album celebrating scientific endeavor. It is a response to current times in as much as the fact that making a science album in this day and age turns out to be a tacitly political act! As far as favorite songs: Meteor Dinosaur – about a world in which cooperation ensures mutual salvation; and Shadow- about the miraculous yet simple fact of stopping the light from a star with your body makes a shadow on the ground. But really- I love all of these songs so much…

MM: Was it easy or hard to write songs based on scientific concepts?

JR: The way we approach beginning to write an album is usually from a loose curricular perspective. So, writing science songs was concrete and fun! We did have to check our conceptual explanations with a real scientist to make sure they were accurate.

MM: Did you think it was fun to use science as a muse?

MM: Generally speaking, what can people expect from your concerts?

MM: What has listener feedback to “Giants of Science” been like so far?

JR: Every album that comes out I get all nervous because in my mind, all of our records are quite different… but the response so far has been GREAT.

MM: You’ve had an awesome career, what have been some of the greatest highlights, especially with working with this album?

JR: Going to the Grammys a couple of times was definitely a highlight of a life devoted to music… It always feels good to be validated… A big highlight with this album is getting to perform with a giant live band!!!

MM: What are your biggest goals for the overall future of The Pop UPS and is there anything else that you would like to add?

JR: Our overall goal is to make content that nourishes people of all ages on as many levels as possible… Were currently getting to develop a TV show based on a funny, handmade, puppet filled, musical world… To see that come to life will be a magnificent realization of a long-time goal of ours. Getting to make television- construct worlds and create stories- is a massive goal of ours. 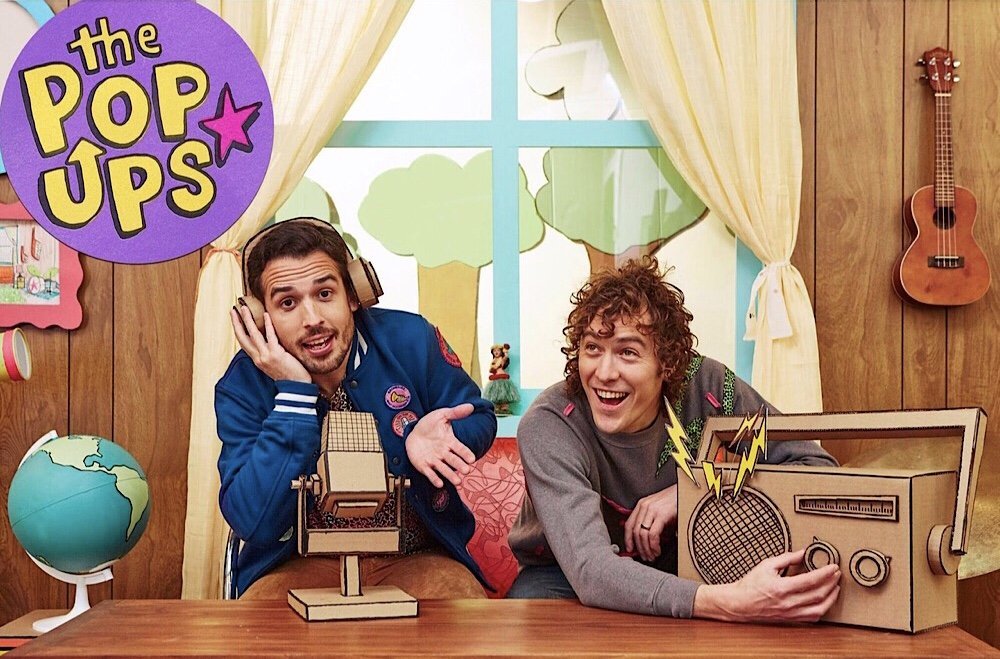 The Pops Ups are a musical duo.