Skip to Content
Home / In the Media SpotLight / The Not-Its! Release New Album “Ready Or Not!” 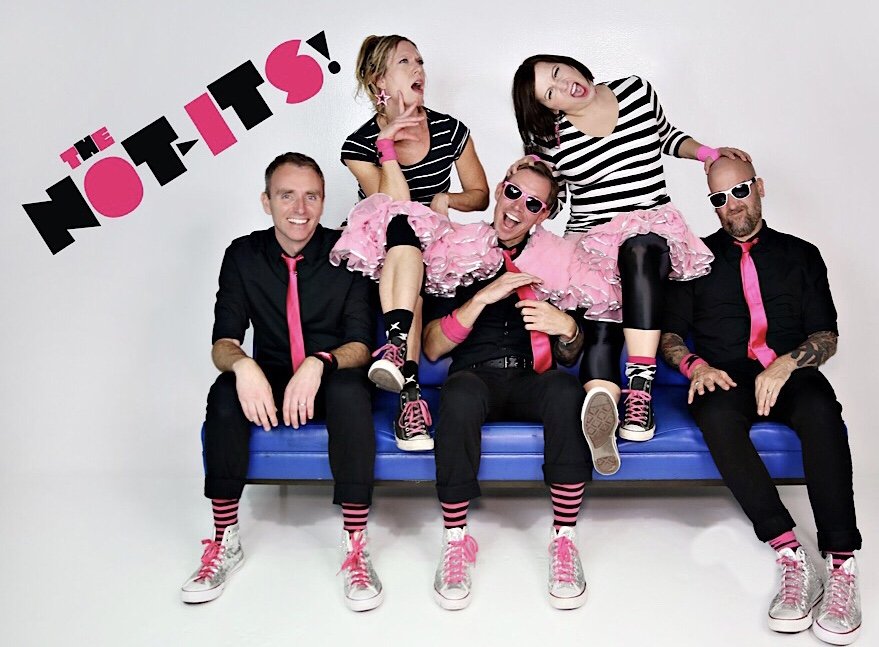 The Not-Its! have rocked the kids music world for over ten years with their up-tempo albums and high-jumping live concerts that give children their first “rock show” experience. With the release of Ready Or Not!, this Seattle kindie rock quintet plan to bring children and their parents to their feet screaming for more, the moment they hit the dance floor.

The Not-Its! can boast of real-life parenting experiences and accomplished musical backgrounds. Shannon was lead vocalist of lauded ‘90s indie-pop bandVelocity Girl (on Seattle’s Sub Pop label) and has since recorded two solo albums under her own name. Rhythm guitarist Adamson has been a punk rocker and social worker involved for more than a decade with homeless youth—today he’s also a busy Seattle Realtor. Welke (drums), a former member of Harvey Danger, is currently working as a designer (his home was recently featured on HGTV). Guitarist Baisden is also a rock musician as well as an elementary school teacher for special needs children. Helman (bass) is an HR professional during the week. Altogether, this tight-knit band has 10 kids who often handle the “merch” table and perform onstage.

The band’s songs focus on everything from the challenge of curriculum night at school, to a runaway bike, to getting buried in the tangled mess of lies, the 12 songs on “Ready or Not!” present a multi-layered sonic exploration of the adventure of childhood. The album will find out on September 21 and the band is hosting many concerts to promote it.

Danny Adamson (DA): Most of us gravitated toward punk rock or indie rock as we entered high school. Even though we grew up in different parts of the country, we were cut from the same cloth, which maybe explains how we ended up playing together. As we all grew, we met other kids who were listening to music that we also liked, then we started to play in punk or indie bands, which had definitely helped create our sound. Once we all landed in Seattle and started making babies, our magnetism must have just pulled us all together.

DA: Our writing process is different based on who brings what to the table. If Danny brings an idea, he has too much of an idea of what the end result should sound like, essentially telling everyone what their part should sound like and doesn’t let everyone be creative. His process starts with a guitar riff or the music first. Make it sound cool and then figure out what to sing about. When Sarah brings an idea, it will often come with lyrics or a melody first and then we will build the music around it. When Tom has an idea it’s generally one guitar riff. Sometimes it will have an edgy topic that will get molded into rainbows and unicorns. He will stand up for his idea and usually we will be left with a slight edge still there in the end result! When Jennie brings an idea it’s often on a napkin and the iPhone voice memo she plays us is the softest, sweetest acoustic recording. Then we rage it out and speed it up 4 times faster than she originally wrote it.

MM: How did you come up with your unique names, The Not-Its!?

DA: We had lots of name ideas, some were decent, some were horrible (Sarah and the Hot Lunch?). The Not-Its! sounded playful and fun to us.

MM: Can you tell us about the content and inspirations behind the songs on this newest album, Ready or Not!?

DA: We jokingly said we were going to get really real with this album and write songs about divorce, death, child abuse and heavy things like that. Obviously we weren’t going to do that, but we do touch on some edgy childhood and parenting topics with songs like “The Battle Of Curriculum Night” (angry parents at curriculum night),” A Lie Is a Lie” (those little untruths), “Runaway Bike” (running away) and “Potty Mouth” (first time swearing), but we really tried to have a full spectrum of moods on Ready Or Not!” with playful songs like “Hide & Seek,” “Staring Contest,” and “Let The Games Begin.” and all the way to sweet and huggable songs like “Little Bug,” “Heading Home,”  and the final track, “What Will I Be?” These songs are all inspired by our experiences with our own ten children and the things we see in everyday life raising them!

DA: We are excited to start playing these new songs and hear which ones people will gravitate toward. As for the past fan favorites, and ones people enjoy when we play live…some of those are:

“Green Light, Go!” (we play this at every show)

(We also have awesome videos for most of those songs on our YouTube channel.)

DA: This band does not pay bills for any of us, so let’s be super clear…we ONLY play in this band because we LOVE it and it is super fun and rewarding! Because of this love for playing for children and families, we really get excited for some of the little things like watching a kid who has never seen a live band light up and get struck by rock-n-roll lightning when we start jumping around. If we can light a musical fire under the kids of the world, then our mission will be accomplished!

As for specific experiences, we have some fans that come to show after show, and we love that! It’s amazing that they love coming to see the same songs over and over again, and we love their support. We also will invite some super fans to participate in singing on our albums when we’re in the studio. That’s pretty special too!

DA: We all have played in bands that focused on, uh…let’s say “fans above the age of 15?” and then we seemed to take a bit of a hiatus once we started having our own kids. Our need to play music for kids came out of necessity. There was lots of folky or soft music for kids out there, but not a lot of loud and edgy music. We wanted to fill that void. Kids like to rock. Kids need to rock.

DA: Our goals for The Not-Its! are to keep this train rolling and keep it growing…whatever that means. As long as we have forward momentum, it continues to be fun! It’s a lot of hard work, so sometimes it’s not fun, like when flying a red-eye to the east coast and waking up on 3 hours sleep to play a show, or not seeing our families much when we record an album and have long studio hours. But, even then, it’s still kind of fun! We’ve played in New Delhi, India, so we’d love to continue to play internationally.

DA: We are proud of the new album, “Ready Or Not!” It’s out September 21st. Also, we invite your readers to come see us live if we are ever near you. We promise it’ll be the best show your kid has ever seen! Check the website for upcoming dates: www.wearethenot-its.com

For real-time interactions, fans may join The Not-Its! Nation on Facebook and Twitter. You can also learn more by visiting their official website. To order the CD, see here.

Ants Ants Ants Release Album Titled “Why Why Why?”