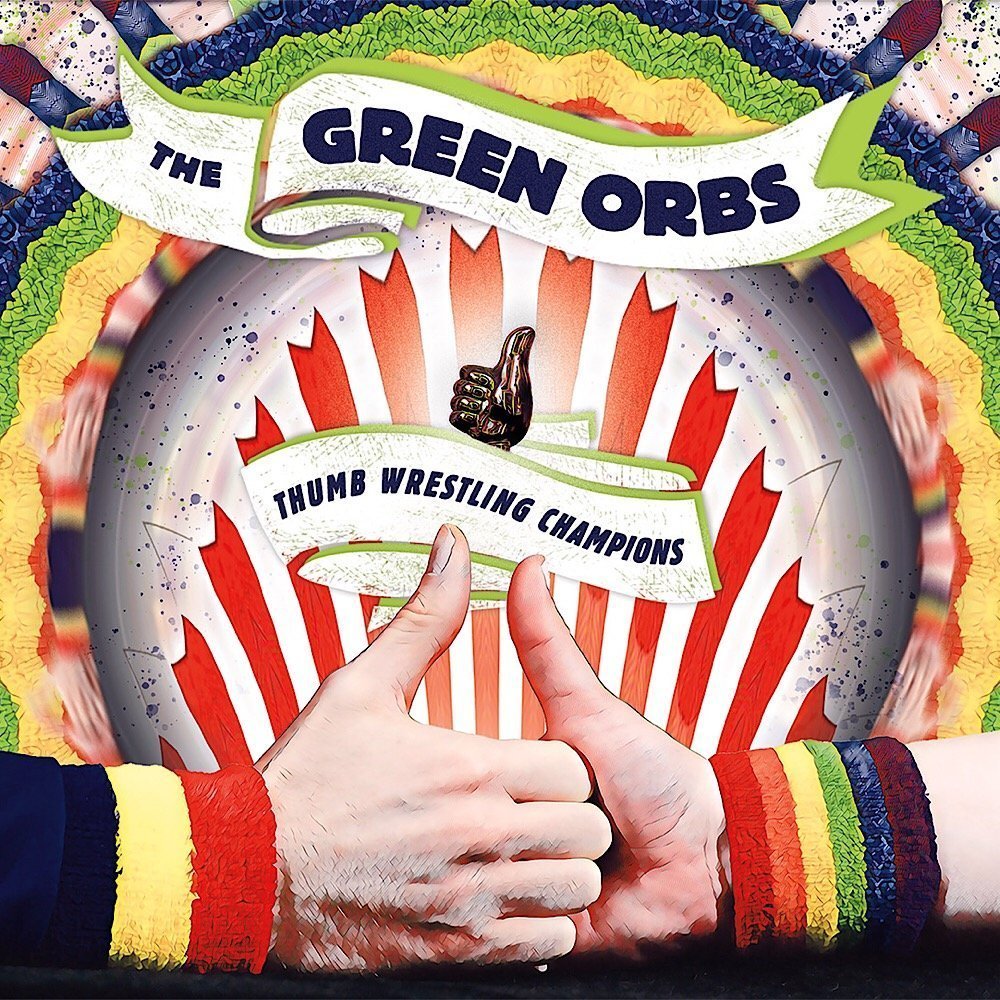 The Green Orbs is a musical band for families that is set to release a new album titled “Thumb Wrestling Champions” on September 7, 2018.

The Green Orbs are the brother-and-sister team of Eddie RosenBerg III and Heather Hirshfield, who grew up in a music-filled household near the Jersey coast listening to the Beatles, oldies radio, and ’80s songs. These influences are front and center in this brilliant, zany album. “Thumb Wrestling Champions” is a fun album that pays homage to everything from the ’80s movie montage to Abraham Lincoln.

To date, The Green Orbs have written and recorded 50 songs for YouTube, with 40 currently available for use in videos, copyright free. In 2015 they collaborated with actor Joel Marsh Garland (Orange is the New Black, The Last O.G.) on a song called “Mr. Mustache,” which was later released, along with “The Hams in The Deep Blue Sea,” as The Green Orbs’ first EP, Dear Mr. Mustache. 2017 saw The Green Orbs collaborating with children’s artist Uncle Dox on the song “Cornfield,” which was named the #3 kids’ single of the year by the Radio Active Kids radio show.

Eddie Rosenberg III is a composer/performer currently living in New York City. He studied saxophone at the Eastman School of Music, composition at Queens College, and counterpoint with Paul Caputo. Eddie is currently pursuing a PhD in musical composition at Stony Brook University. Heather Hirshfield is the mother of three beautiful daughters who continue to inspire her every day. Heather began playing piano in second grade and currently teaches fifteen keyboard students. Over time, she added ukulele, trumpet, and baritone horn to her instrumental accomplishments, and she has also been training as an opera singer for the past twelve years under the tutelage of Ildiko Rozs.

Thumb Wrestling Champions will be available at iTunes, CDBaby, and Bandcamp (CD and digital), as well as Amazon (digital only). Recently, the siblings spoke about their experiences making music and more via an exclusive interview.

Heather Hirshfield: I do not ever remember a time when music was not a part of our lives. We heard it constantly in our house, we sang it, we eventually were taught how to play it…it was just part of the fabric of our family.

Eddie RosenBerg III: Our sound came about very naturally.  It is a combination of our two personalities, brought to life by the fantastic musicians that helped us on this project.

Eddie: Each song is different, but we usually start with at least a line or two of lyrics. That gets us started and we fill it in as we go. Sometimes a song starts more conceptually. “Twelve Steps To Eating Your Veggies” started as an attempt to imitate the counting structure of Connie Stevens’ “Sixteen Reasons.”

Heather: I might hear a little phrase from one of my kids or piano students and create an idea for a song from that. For example, one of my daughters once announced that her new rubber duck was The Duck of Whistleburg! I thought that was such an interesting thing for a nine-year-old to say! The little phrase quickly grew into an entire song.

MM: You are brother and sister, so what is it like to work together in this way?

Heather: It is really enjoyable and most of the time really easy! We have the same sense of humor and, obviously, a shared history, so a lot of times we understand what each other is trying to say without finishing the thought.

MM: Eddie, you’re currently pursuing a PhD, so what do you plan to do with it and how does your education influence and/or impact your musical career?

Eddie: I decided to pursue a PhD because I really enjoy studying in an academic setting, and I wanted to push myself compositionally. Additionally, having a PhD will hopefully open up some more possibilities for teaching music at the college level. In terms of impact, it’s hard to say. A music career is always a precarious and unpredictable thing regardless of degrees. We’ll see what happens!

MM: Heather, you’re a mom, so how does that inspire you creatively?

Heather: My daughters have been an endless source of creativity and inspiration. They are all teenagers now, but when they were younger I was a stay-at-home mom, and I was continually making up stories to keep them entertained. Some of these stories have turned into ideas for songs. For example, the song “Ruby the Tooth Fairy” stemmed from a story I told my daughter when she was worried that the tooth fairy wouldn’t come because she had dropped her tooth down the drain in the bathroom.

Heather: We have played some of the songs from the album for school kids at our songwriting workshops, and “Doug The Bug” always seems to be a favorite with the kids.

Eddie: I think it’s mostly because the song contains the word “armpit.” We also have an instrumental song called “Splashing Around” that seems to be popular in the YouTube Audio Library.

Heather: For me, each song is special in its own way, but I do really enjoy “Thumb Wrestling Champions” and “Twelve Steps To Eating Your Veggies” from our new album, and “Mr. Mustache” from our EP Dear Mr. Mustache.

Eddie: My personal favorite fluctuates. I am partial to “Thumb Wrestling Champions” because of the chorus, which came way later than the rest of the song and completely changed the vibe of the song.

Heather: I really enjoyed playing “The Suction Cup Shuffle” for the first time to a big group of kids. There is a dance move that I teach kids when I am singing it. Since it was the first time, I was a little worried that no one would do the dance. By the end of the song, everyone was dancing, and I was singing out in the middle of this wiggling crowd. It was such a fun moment.

Eddie: During one performance of “Mr. Mustache” a little boy walked up and presented me with a stuffed parrot. I was in the middle of singing, so I did my best to adapt the lyrics to include the parrot. I’m not sure how successful it was, but I enjoy those kinds of unplanned moments.

Eddie: We began by writing personalized songs for the kids in our family.  From there it just snowballed.

MM: What can people expect from your latest album and how is it different from your past releases?

Heather: Thumb Wrestling Champions was such an enjoyable album to write. We really took our time with it to make sure that each song is fun for the listener.

Eddie: We were even rewriting lyrics as we were recording them. We hope that the care we put into it comes across in the music. This is our first full length album, so we don’t have too much to compare it to. We put a lot of work into the production, and we are really happy with the sound of the album.

Heather: I have so many things I would like to achieve with The Green Orbs! The biggest would have to be to go on a world-wide tour and to write a Broadway musical.

Eddie: I would like to travel to outer space.

Heather: Thanks for chatting with us about this album.  We hope that people will check it out, and we hope they enjoy listening to it.