Autism Spectrum Conditions are primarily viewed in terms of its deficits – impairment in social and communicative development, and interest in repetitive activities in limited domains. However, more recent research shows that this is a narrow view of autism spectrum conditions (ASC). Autism Spectrum Conditions is also often accompanied by atypical strengths in other areas, prompting researchers to characterize it as a cognitive style instead of a cognitive disorder. For instance, savant skills which are defined as ‘an outstanding skill/knowledge clearly above participant’s general level of ability and above the population norm’, are much more likely to occur among people with ASC as opposed to the neurotypical population. This co-occurrence of both strengths and weaknesses suggests that to understand autism better, we need to look at not just task failures but also task successes. One of the key areas that the autistic brain is exceptionally good at is attention to detail. This strength can manifest as a tendency to focus on details at the expense of understanding the big picture (also known as weak central coherence). But this ability can also be an advantage in some situations like visual perception.

People with autism are less likely to succumb to visual illusions. In an experiment using Titchener circles (see figure below), people with autism were more likely to guess correctly that the center circles are of the same size, as opposed to the control group whose judgment was impaired by the context of surrounding circles. 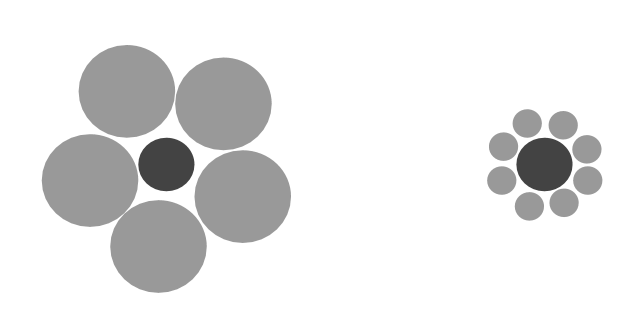 The Hyper-Systemizing Brain: A Feature Of The Autism Spectrum Condition

A more recent theory, called the hyper-systemizing theory, postulates that this attention to detail has a positive purpose – it serves to build a superior model of a system. A system can be any kind as long as it follows rules (‘if p, then q’). The careful attention to details helps the autistic brain identify different rules in the system that further help build a better mental model of the system.  Researchers have identified several different kinds of systems including:

The need to systemize can lead to the typical behaviors observed in autism – narrow interests, repetition, and resistance to change. As the researchers explained, “This is because when one systemizes, it is best to keep everything constant and to only vary one thing at a time. That way, one can see what might be causing what, and with repetition, one can verify that one gets the very same pattern or sequence (if p, then q) every time, rendering the world predictable.”

The current educational system puts students with ASC at a disadvantage in both learning and testing of knowledge.  When autistic students don’t respond to a simple question it is likely because they know too much, and not because they know too little. To the question “what is a beetle?”, a neurotypical student could give an imprecise response, ‘a beetle is an insect’, whereas a hyper-systemizing mind will struggle to give an accurate answer as it involves many factors and relationships. This ability to bring into mind a more complete set of factors and relationships is helpful in a different domain – creative thinking. When most people think of a concept, only the dominant ideas connected to that concept in their brains come into focus. As a result, their focus revolves around a limited set of ideas as they fall into an ‘associative rut’. This limits their ability to come up with original ideas.

On the other hand, research shows that some people on the autism spectrum come up with fewer but more original ideas than the neurotypical population. In another experiment on verbal creativity, researchers found that the group with ASD generated more creative metaphors compared to the control group. The above traits imply that the educational system needs to be redesigned in a way that takes the autistic cognitive style into account. For example, more open-ended project-based learning that aligns with the student’s systemizing style and additionally provides opportunities to be creative have the potential to bring out a student’s strengths better.

People with Autism Spectrum Conditions are hyper-systemizers that think and process information differently from the neurotypical population. In the short term, they might appear limited in their abilities because of the significant time spent on repetitive tasks. However, in the longer run, they could become experts in their domains due to the deeper and more expensive knowledge they build.

Also Read: Autism Friendly Colleges- Are We Ready When Autism Goes To College?

How safe is your child online? Monitor 6 apps on your child’s phone with a handy infographic

Joanna Clark: The Woman Leading The Sleep Revolution For Families