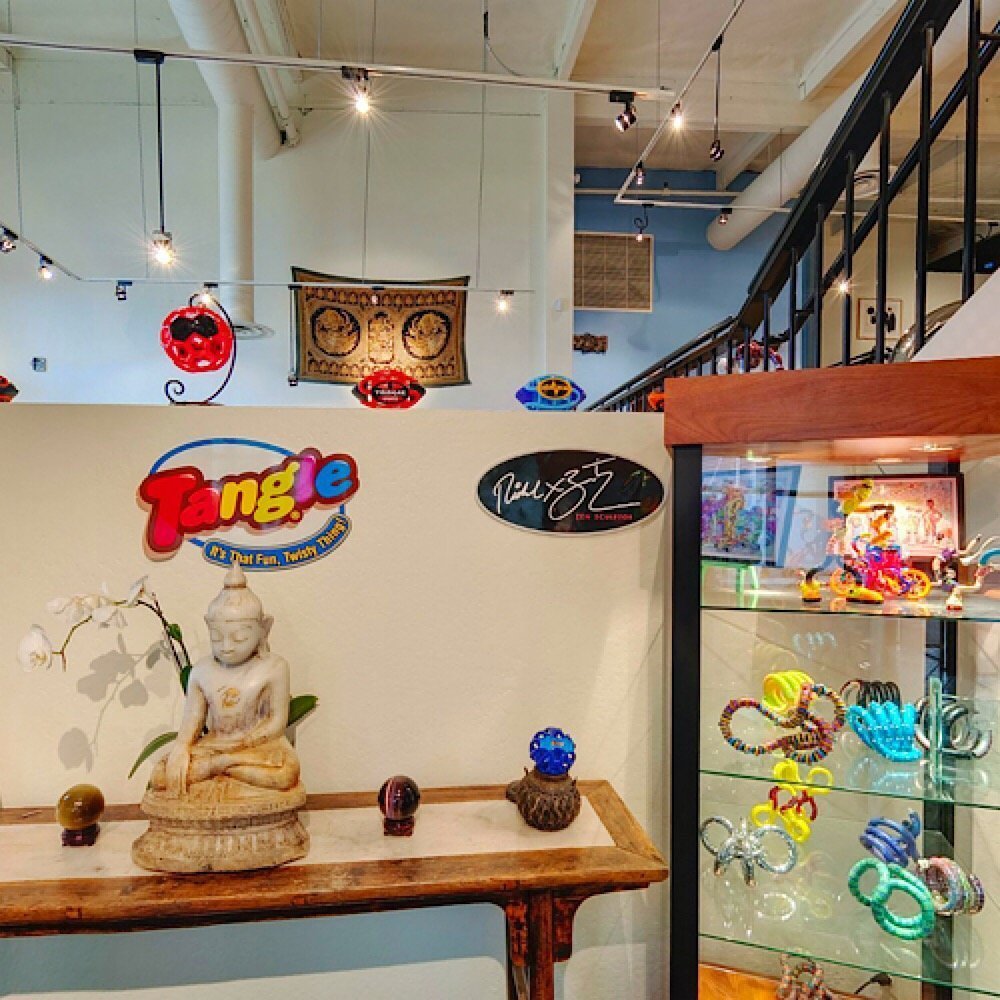 Tangle Creations is the evolution of Tangle Toys, a company helmed by CEO Richard Zawitz, that began thirty-three years ago and was founded on the concept of “Creativity for All.” Their mission began in 1981 with the invention of the Original Tangle Sculpture and, with its success, founder and creative force behind Tangle, Richard X. Zawitz, has developed a myriad of products based on the original invention.

Recently, Richard granted an exclusive interview where he discussed the company, its products, and his hopes for its future.

Meagan Meehan (MM): What inspired you to start Tangle over thirty years ago and why was that specific name chosen?

Richard Zawitz (RZ): I was inspired to start Tangle thirty years ago because of my interest in creativity and sculpture and metaphysics. I studied Asian philosophy and Asian art history and sculpture in combination during the 1960s and early 1970s at the University of Hawaii, and I discovered what I considered the Tangle Particle, which is all energy curves or waves, or it’s in circles, and spirals, and I created sculpture based on that.

Eventually, I came back to the United States after travelling around Asia and built a loft studio in Waltham, Massachusetts in 1975 and had a show. One of the sculptures in my show was a moveable wood sculpture that I called “Tangle,” for “tangent angle” or, when you have spaghetti, it gets in a tangle, or your hair can get in a tangle. I love the name. And so that’s how I chose that, and that’s how I was inspired through trying to find an essential energy form, and that was the curve, and I found a way to take 90-degree curves and interconnect them and found a formula; and thus, Tangle was born.

MM: What was your childhood like and what were some of your most cherished toys growing up? Do you think these memories impact your sense of fun and creativity in the modern day?

RZ: My childhood was very interesting. I grew up in the 50s, it’s called in America, having been born in 1946. And my toys were balls and bats and little cowboys and Indians and puzzles a lot, and I loved jigsaw puzzles.

In those days, your parents were too busy working to become middle-class, and the kids were left on their own, so I might’ve played with rocks or dirt, a lot of sports, and then I did discover jigsaw puzzles, which I became fascinated with, and building models, and so those were my cherished toys.

And those memories – yes and no – maybe indirectly. I never used the past a lot as a guide when I was growing up, but by the time I was 21, I discovered my creative core, and from there – that was around 1967 – so from there, I continued passionately and faithfully towards building my own body of work, including Tangle in my fine art, and going after sculpture.

MM: You make games that are appealing to all ages. Right now, how many toys does Tangle offer and have any proven to be especially popular?

RZ: Do I make games that are appealing to all ages? No – we don’t make games, we make Tangle, which is not a game. Tangle is a plaything, and we make NightBall, which is a product for play. It’s not really a game, but of course, you can play in the game of football, basketball, soccer, tennis with our sports.

We have all of these light-up products for a night. So, they do work with games but they’re mainly stand-alone – either outdoor plaything inventions, or, of course, Tangle is a plaything that can be construed as a puzzle, if you wish. It’s really not – it’s more of a solution.

MM: How many toys does Tangle offer and have any proven to be especially popular?

RZ: Well, they’re all popular – our NightBall’s sold all over the world, in basketballs and soccer balls and in American-style footballs, tennis rackets, baseballs, so . . . we think they are. And, of course Tangle is 38 years old, and Tangle, we like to think, is an iconic plaything that invented the “fidget” category.

MM: “Tangle Therapy” is the name of one of your lines and it seems to have relaxing properties. What kinds of health benefits can people garner from engaging with one of these items?

RZ: Yes, it does. It turns out that Tangle itself calms, soothes and relaxes. So a number of years ago – around 15 or more – our users, our Tanglers, started writing me on the Internet and telling me how much they were using Tangle for therapy and therapeutic uses, which included special needs children, autism, sight-impaired, stressed, distressed with a lot of stress, ADHD, and so we decided to build a product line called Tangle Therapy, which is a thermal-plastic rubber coated, TPR-coated – which is a safe, very safe plastic, and then we came up with Tangle Therapy. The health benefits are certainly that they make you feel better, they make you happy . . . Also, we came up with the term “Brain Tool,” after teachers started contacting us and telling us how much Tangle’s ability to help kids focus through fidgeting helped to improve their test scores, so this was very, very important to us.

MM: You also released a series of illuminated “NightBalls” that never seem to dull. How did you come up with this amazing technology? To your knowledge, how long will the lights last?

RZ: Yes, that’s true – we have a brand new product line called “NightBalls,” which I’ve mentioned earlier, that we have taken the concept of a ball and created new versions and innovative versions: balls that are airless, but bounce, balls that have an extremely effective illumination system that our partner has invented, and it’s called “Pulse LEDs,” and they illuminate when they spin, so it works perfectly for us and our products. It is an amazing technology. The lights last for over 150,000 pulses, so if you throw it once in the air – that’s one. Twice . . . So that works out to about 40 continuous hours if you were to throw a ball back and forth for 40 hours non-stop, it would last that long. Of course, people don’t do that.

RZ: I think up the ideas for my products either by seeing something or being spurred on, or having a vision, or some brainstorming with others, but we don’t use outside inventors. I get ideas from seeing a product that I think needs [to be] improved, like the ball, our NightBall. I didn’t see a ball that I thought was very interesting about 10 years ago, and I decided to go after producing a ball that not only could be different in bounce, in feel, but also in looks or aesthetics, and then I wanted to add illumination. And luckily enough, one of my partners in Asia had invented a brand-new illumination system called “Pulse Lights LEDs,” and so, we combined that with our philosophy to build a better ball (“B.B.B.”).

MM: To date, what has been the most rewarding part of working with Tangle and how do you envision the company expanding over the coming decade?

RZ: The most rewarding part of working with Tangle is to see it sold and to see it being useful to people – including NightBall. Tangle itself is a small miracle – that’s why I call myself a Thaumaturgist – that’s a magician and a bringer of small miracles. So, my job, including studying metaphysics back in the 1960s, was to find some of the secrets of nature, and I believe that Tangle is one of those “secrets of nature” that I have discovered that is both enjoyable, but also very therapeutic and useful. And we found out through thousands and thousands of testimonials how much benefit Tangle brings – both as a therapeutic device for relaxation and kids with special needs, to also being a “brain tool,” and helping people, period, to focus better through something called fidgeting. And so, that’s extremely rewarding when you’re an artist, and you want to make a difference – to know that something you’ve created is making a difference and helping others. That’s very important.

RZ: I would say that you’re going to have to work really hard. Do your homework, know what product you have, test it, show it to friends, and know a lot about if you’re going to manufacture it or learn about something called “licensing.” The toy industry is a wonderful place to spend your life, but it’s also a difficult business to be involved in, in terms of earning money. It’s competitive, and there are lots of difficulties that could come along; but also, of course, as I can tell you, it’s an extremely rewarding business to know that something you’ve created is selling – that’s important – but also helping others.

MM: Are there any upcoming events or product releases that you would like to mention?

RZ: Yes . . . we’re bringing out several new NightBalls this year, and a construction toy – a new game, which you toss. It’s called Corn Hole, and we have a light-up cornhole. We have light-up bowling that we’re going to be releasing. We have a brand-new ball called Super Glow that looks like glow-in-the-dark but it stays illuminated, and it’s not phosphorescent glow-in-the-dark – it’s a real, incredible light. And things in the pipeline that you’ll see soon enough!

20 Great Toys of 2017 That Can Brighten Your Holiday Season