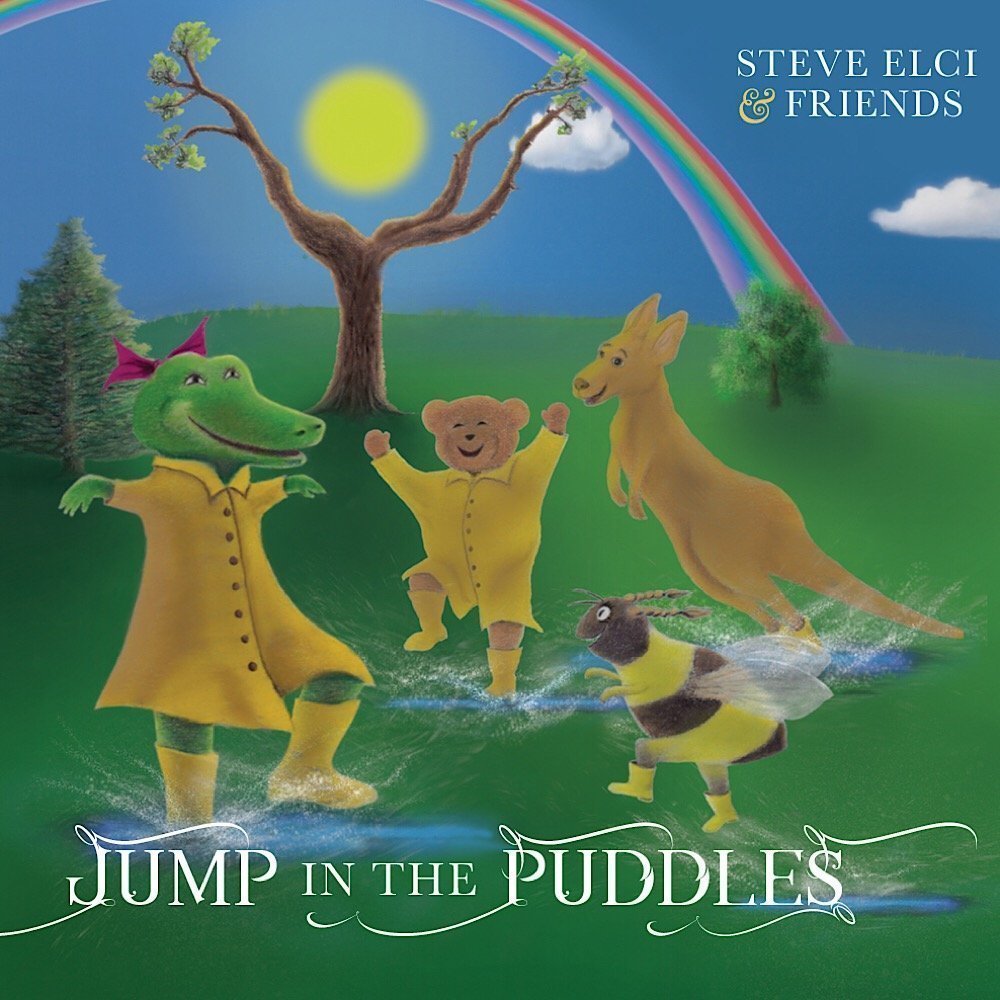 Steve Elci & Friends is a family entertainment group that is scheduled to release a new album called “Jump in the Puddles” on July 13, 2018. A celebration of the traditional sounds of American roots music from our nation’s heartland, “Jump in the Puddles” is filled with irresistible tunes that bring kids and families together for a bit of singing, dancing, and clapping.
Reinforcing ideas of the simple pleasures of life, “Jump in the Puddles” weaves a musical fabric that includes varicolored threads spun from a fine sampling of Americana — 1960s music, 12-bar blues, country, and more — in performances of exceptionally high quality by singers and players who display a thorough understanding of the medium and a total mastery of their art, produced by a team that knows how to deliver a great sound.
Charisma, leadership, and compassion best describe Steve Elci. A musician and activist for 35 years, Steve’s love of catchy hooks and his soaring vocal style have won acclaim from fans and critics alike, including an Emmy nomination for his 2013 – 2014 children’s web series, Kidsploration. Steve is just as thrilled to entertain local fans in Connecticut as he is when performing as far afield as Franklin, Tennessee’s Pilgrimage Festival, where last year he shared the bill with Justin Timberlake and Eddie Vedder. Steve’s dad, himself a Connecticut-based musician, performed, directed, and arranged for many regional Big Bands from the late 1940s until 2010. Growing up in Waterford, Connecticut surrounded by the sounds of Count Basie, Frank Sinatra, and many others from the Big Band Era, Steve soaked it all in and knew he was destined to become a musician.
Recently, Steve discussed this new album and more via an exclusive interview.

Meagan Meehan (MM): How did you initially get interested in music and how did you form your band?

Steve Elci (SE): Initially, I was inspired by my dad who was a local big band leader from the late ‘40s until 2010. He arranged his own versions of songs from artists like Count Basie, Glen Miller and Frank Sinatra. Although I did not pick up the piano, which is what my dad played, I did learn the guitar. Fascinated by MTV, I wanted to write music and make music videos like my rock ‘n’ roll idols. Similar to my dad, writing music is my strongest attribute. I started writing songs by the age of thirteen and immediately wanted to perform them. Staying in southeastern CT most of my life, I became part of the fabric of the community for music and activism and in doing so got to know all the musicians. Forming a band became easy, as all the musician were my friends. But not until 2009 did I find the right band for my children’s music. They are a special bunch!

MM: Your latest album is due out in July, so what are some of the songs on it and what, if any, personal experiences inspired them?

SE: “Jump in the Puddles” has many personal experiences embedded in the songs. Having grown up on a beach and only minutes from state parks, “Shine On” is a look back at my childhood playing along the rocky New England coast collecting sea glass and sea shells and playing in the sand, and also exploring new paths in the beautiful lush parks of southeastern CT. Oh, to be a kid again!

“Bumblebee” offers a different side of my childhood where I always celebrated diversity and friendship in school. The power of friendship can never be underestimated. Many of my lifelong friendships started through incidents at school where I stood up for those who had been bullied or made fun of. It’s a moral compass I have always had, and I am proud of it.

“Teddy Bear” talks about a bright blue-haired teddy bear that was my sidekick and friend growing up. I would take this teddy bear everywhere: the beach, a friend’s house, dinners, sports games, you name it. “Oh, the comfort you bring”

SE: My writing process starts with a melody, which to me is the road map to of the song. What makes this album stand out is its radio-ready completeness. All tracks have been written for children and parents to love through whimsical lyrics, catchy melodies, and big sing-able hooks that make you want to play the songs over and over again. It’s fun, and of course it makes you want to “jump”!

MM: What can people expect to experience at your concerts and/or live shows?

SE: People can expect a high energy, very musical and interactive show filled with educational and positive life messages that engage children and parents in the performance. Performing for kids over that past nine years, I have been able fine tune this.

MM: You grew up around music, so do you think that influenced your desire to get into the family genre?

SE: I certainly grew up around music, but that did not influence my decision to get into the family genre. The true factors who pushed me into the family genre were my children. Playing guitar and watching them dance to my on-the-fly-written songs was heart filling and addictive. I wanted to write more and more songs that made them dance, and in fact they became my barometer for my new songs. If my new songs made my kids jump and dance I knew I was into something. If they didn’t, then I went back to the drawing board and worked on them until they were tested again. I loved the process!

MM: What are the challenges of being a professional musician, especially one who creates kid-friendly tunes?

SE: The constant challenge is writing engaging songs that both kids love and parents love. It’s this dual layer writing that is the hardest to master. Too much to one side or the other is not good. I have found you always need a balance that kids and parents can relate to.

MM: Overall, what are your biggest goals for your musical future and can you give us any spoilers about impending releases?

SE: One of my biggest goals is to get this new album to the masses through radio play, interviews and reviews. This is my overall best work to date and I want to make a “splash” with it.

SE: We are in the process of planning video shoots for at least three songs – picking the three will not be easy!

Thunder In My Arms: Interview with Musical Artist Lissa Schneckenburger