Skip to Content
Home / Culture / Wisdom in our festivals / Sri Ramanavami: Why do we celebrate it the way we do? 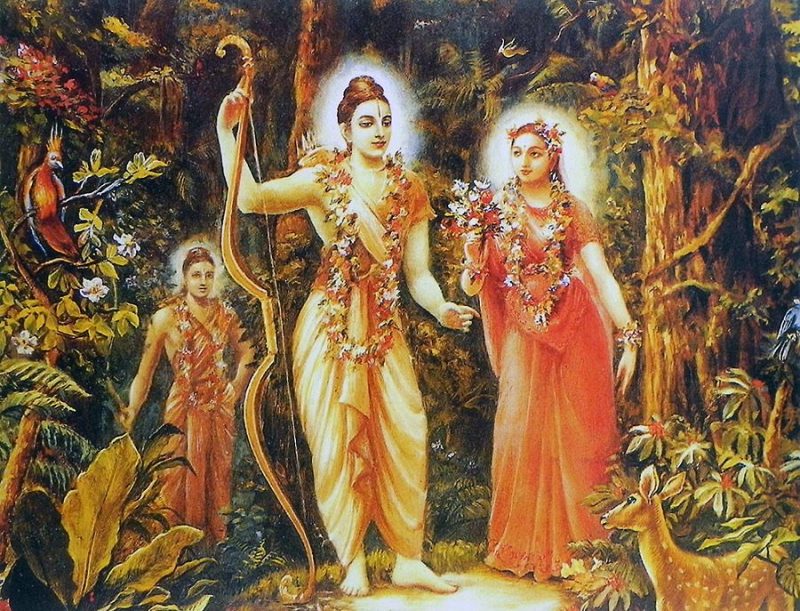 Sri Ramanavami is the celebration of the birth of Rama, the prince of Ayodhya whose life mission was to simply show the world the beauty of taking our various roles seriously.

Rama was such an ideal son that his parents were overcome with grief and shame over their own impropriety. He was the ideal husband – one of the rare husbands adored by his wife because of his unabashed love for her. He was the ideal brother, the one who put their love above power or riches. He was even the ideal enemy,  who respected his enemy for his strengths and skills and fought him only to right a wrong- and not for Lanka’s immense wealth.

When he finally did become king- he was the ideal king when he put his subjects and their interests above everything else.

His kingship cost him the joys of fatherhood and the love of his wife(which was excruciatingly hard-won, to say the least.)

Rama’ greatest lesson to us is that our lives constantly demand conscious choices in the roles we take up and our reconciliation with the consequences of those choices requires deliberate effort.

The delicacies of Sri Ramanavami

Our festivals are not mere celebrations, they carry a deep wisdom about ways to simplify our lives.

So, what is the wisdom in the celebrations of Ramanavami?

Rama Navami falls on the ninth and last day of Chaitra Navaratri, celebrated during the Spring season.  It marks the end of spring and the beginning of summer. 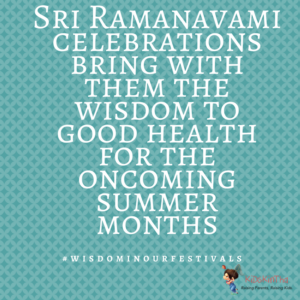 Many festivals in India carry traditions about making and sharing only certain food savouries as ‘Naivedyam’ – an offering to the deity being worshipped that specific day.

Of them all, Sri Rama Navami seems to be one of those festivals that need the simplest of simple preparations to appease the deity- Lord Rama. Sri Ramanavami brings with it the wisdom to good health in the oncoming summer months.

The most prominent feature of Rama Navami celebrations is that people come together in a common place for Bhajans, Kirtans and worship. At the end of the session, the crowd is served with the following:

Panakam– a drink prepared by adding  jaggery, ginger powder, pepper powder and sweet spices like elaichi and cloves to water. The water is “fortified” not with artificial nutrient but with the natural minerals present in jaggery. The ginger and pepper aid in regulating the digestion- something that is likely to be disturbed due to high temperatures during summer. The elaichi and cloves add a refreshing zing to the drink. In today’s terms, this is the coolest instant ‘energy’ drink

Vada Pappu: This is a simple, recipe that does not require any cooking! Moong dal is simply soaked up in water, and garnished with coconut, green chillies and salt.  According to Ayurveda, Moong dal is not only protein-rich, it is a cooling legume. Western nutritionists classify is as “Alkaline”, meaning it has the quality of assuaging acidity. Though it is protein-rich, it is very easy on the stomach.

The protein and carbohydrates in Moong dal is consumed along with coconut, the benefits of which modern medicine has just begun to extol. The mild garnishing with green chillies and salt makes this quite an irresistible dish.Variations of this dish also add the cucumber( another amazing coolant) and grated carrots to the dish.

Spiced buttermilk: Buttermilk, originally derived from the liquid remnant after the churning of butter, is one of the most refreshing coolants and the best way to keep our bodies hydrated. The probiotics in the buttermilk aid the growth of good digestive bacteria in the gut( again aiding digestion). This delicious and nourishing beverage has found a proud place in many cuisines in Southern Asia- kefir, kombucha,  sauerkraut, kimchee, etc. There is nothing better than a glass of buttermilk to calm your frayed nerves in the heat of the summer.

People who celebrate in the quiet of their homes make these and distribute it among their neighbours and friends too.

It is believed that the Naivedyam items are usually the deity’s favourite dishes. Perhaps, this gentle king endeared himself to these energy-boosting foods because he knew this is what we need for the oncoming summer?

These 11 free sites will ignite your inner genius.

Culture, Wisdom in our festivals

Wisdom in our festivals: Why do we celebrate Ugadi?