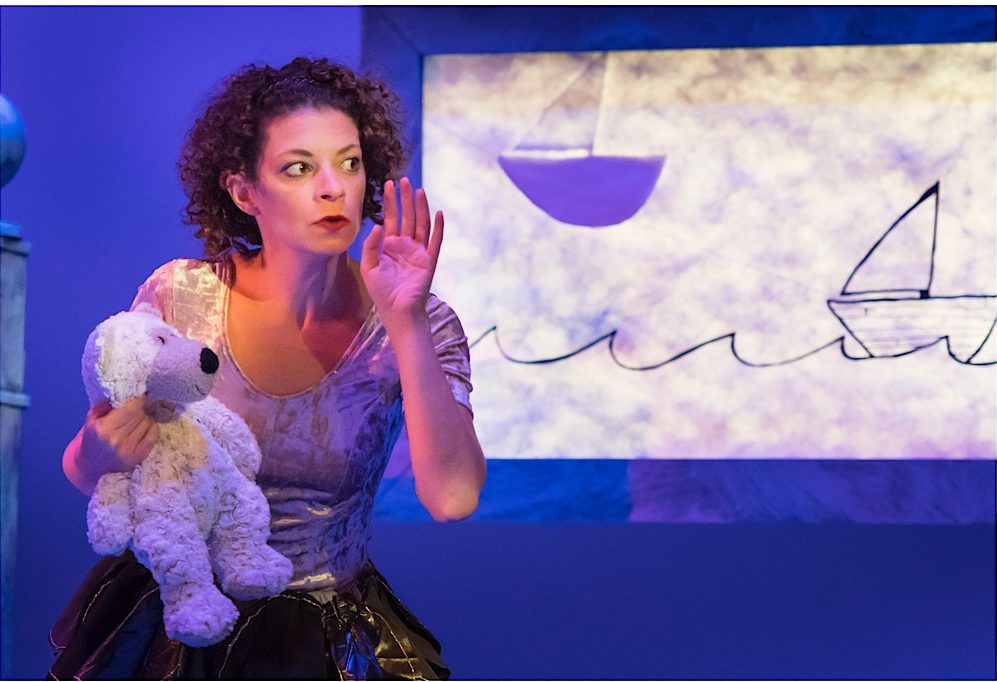 “Wink” is a new play at the Spellbound Theatre that explores dreams from the perspective of a child and a bear. An imaginative and multi-disciplinary performance, the play blends shadow puppetry, physical theatre, and animation to create a unique show that serves as a captivating journey designed to engage and inspire the very youngest audience members.

​Spellbound Theatre brings “Wink” to NYC’s Symphony Space for the first time, for two performances on Saturday, March 24. It’s the last show of the 2017-18 Just Kidding season at Symphony Space.

Inspired by the classic poem, “Wynken, Blynken and Nod,” Wink transforms a familiar bedroom into an imaginative world full of surprises for children ages five and under. Families with children on the autism spectrum or with sensory sensitivities should be mindful that this performance features brighter lighting in the audience and lowered sound levels.

“Wink” transforms a familiar bedroom into an imaginative world full of surprises and the show is being performed at Brooklyn’s Spellbound Theatre which was recently recognized as a leader in this emerging field by the American Alliance of Theater Education with the “Outstanding New Children’s Theater Company Award,” and they’ve received multiple grant awards from The Jim Henson Foundation and The NYC Department of Cultural Affairs for their rich and magical works.

Recently Lauren Jost, the artistic director and founder of Spellbound Theatre, discussed the company and its production of “Wink.”

Meagan Meehan (MM): How did you get into theater and how did your association with the Spellbound Theatre come to be?

Lauren Jost (LJ): I started Spellbound Theatre six years ago, after working for the Seattle Children’s Theatre, New Victory Theater, and other companies that produce and present work for children and families. At the time, there was no one producing theater for ages 0-5 in New York. My own kids were quite young at that time, and I was working in theatre for young audiences, but most of the work being made was for elementary ages. I wanted to make performance that is exciting and magical and age-appropriate for very young kids so families don’t need to wait five years before taking their kids to the theater.

MM: What kinds of plays does the Spellbound Theatre seek and how do you secure the scripts?

LJ: All of our shows are originally devised within the company. We try to think from a young child’s point of view and develop worlds and stories that will engage their imaginations. Often this isn’t a “story” in the same way older children tell stories, but more of imaginative explorations of the magic in our everyday world.

MM: How did you come upon the script for “Wink” and what was it like to turn into a fully-fledged show?

LJ: “Wink” was loosely inspired by “Wynken, Blynken, and Nod,” the classic poem about sailing into the sky and fishing for stars. We were very inspired by the idea of twinkling lights that turn from stars into fish and back again, and these twinkling lights appear throughout the show. It’s also a show about dreams, and how our familiar worlds become unfamiliar and magical in the nighttime.

MM: This show contains a lot of different stylistic aspects, so how did you think them up? For example, were they worked into the script to begin with?

LJ: This show was devised by a group of artists working together, and that group included puppeteers, an animator, a musician, and a movement-based artist, so those styles appear throughout the show. We work very collaboratively to mix our styles together and make sure all those elements can live within the world that we are creating, but Spellbound’s aesthetic always has lots of different styles overlapping. That’s the fun thing about making work for children who may have never seen theater before – they don’t have fixed ideas about what “theater” is, so we can mix and match lots of different styles together, and as long as it is engaging, it works!

MM: What are your favorite moments in this show?

LJ: One of my favorite moments in this show is when the light-up nesting boxes appear. It is such a simple thing – a light up box – but every time it appears the audience gasps. I love those moments of genuine surprise and delight. As a director, I enjoy making moments that are beautiful to both children and adults so they can enjoy those moments together.

MM: What were some of the biggest challenges to perform on stage a la the effects?

LJ: One of the biggest challenges with “Wink” is the lighting. Because we use a lot of shadow puppets, we have to be very careful about putting too much light and washing out the effects. But we also can’t let the show be too dark. Every new venue is a new challenge in terms of getting the lights just right!

MM: What can audiences expect from “Wink”?

LJ: The show is a dreamy little escape from our busy world. No spoken words, only a series of stage pictures that tell a story about a young girl on an adventure with her bear. This show is simple, beautiful, and perfect for a young child’s first trip to the theater.

LJ: After producing theater locally in Brooklyn for the past six years, Spellbound is beginning to bring our work to a national audience. “Wink” had its first trip out of town to the Miami Theater Center this fall and will be visiting more cities next year. We are thrilled to be bringing quality theater for very young children to families across the country in 2018-19 and can’t wait to announce our season!

To learn more about “Wink,” visit the official website of Symphony Space.

From “Ripley’s Believe It or Not” to Children’s Books: Interview with Illustrator John Graziano