Skip to Content
Home / In the Media SpotLight / Board Games: A Closer Look At The ‘Something Wicked’ Indoor Board Game 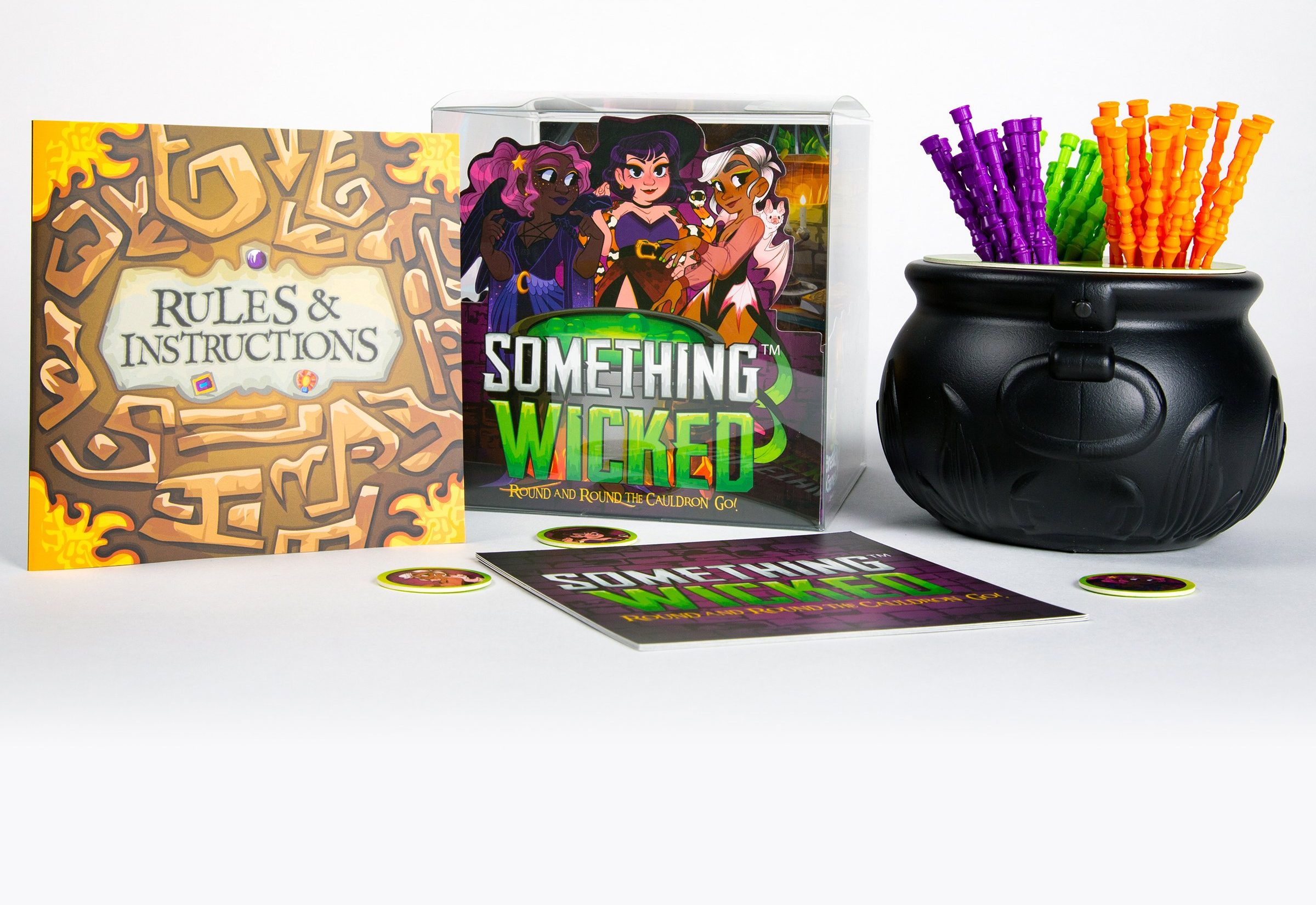 “Something Wicked” is a new indoor board game by Adam Fischer and Kiva Fecteau which casts all players in the role of witches who must collect a total of 13 brooms from a cauldron. This $25 family game for 2-3 players ages 12 and older is fast-paced and easy to learn, which makes it ideal for a range of ages. “Something Wicked” is published by Breaking Games, courtesy of a successful sales pitch at a trade show by Adam Fischer, a longtime indoor game designer and the founder of Shadowsong Industries.

Adam has been designing board games since he was in elementary school. For “Something Wicked,” he partnered with Kiva Fecteau, the Director of Gaming for the Big Frederick Gaming Convention (BFGcon) in Frederick, MD, and owner of Gold Dragon Games LLC, a tabletop game design studio. Kiva is currently busy launching an online company called Blue Rose TLC LLC, which is dedicated to bringing people together in the pursuit of the highest human potential across multiple fields.

Recently, game designers Adam Fischer and Kiva Fecteau discussed their experiences working together to make on the ‘Something Wicked’ board game a reality.

Meagan Meehan (MM): How did you initially get interested in designing board games and how did you forge a path in the toy industry?

Adam: I’ve been designing board games since I was 4. I used to make miniature golf courses, and mazes for small bugs to go through. Whenever I played other board games, I would make up my own rules. Having been an avid tabletop RPG player since around 6, I eventually made my own customized worlds and materials for them. What brought me into the board game industry was my partner, Kiva Fecteau, whose support allowed me to bring the games I’d created in front of publishers and designers.

Kiva: Adam told me one day he had a dream of getting a game published, but he didn’t know anything about the process. I figured I could learn all of that and help him out. It turned out to be a much greater venture than either of us knew, but very rewarding. Along the way, I began designing board games too. The biggest steps we took were because of the people we met along the way and what we learned from them.

MM: What inspired “Something Wicked” and was it tough to create a game with no dice, few card instructions, and no figurines to move around a board?

Adam: “Something Wicked” is the result of a fever dream during a horrible week-long flu!  I woke up after a 48-hour fever, sat straight up like aboard, and the entire game was downloaded into my head instantaneously:  very rule, iteration, and concept. I then shot out of bed and immediately grabbed multi-colored paper clips to see if the idea worked. I persuaded my wife, and our roommate at the time to play it, and after testing, I knew I had something when people couldn’t stop playing it.

Kiva: Between the two of us we design many types of board games. None of them are alike – some have a board, dice, cards, and tokens; some have just dice and cards; some just cards. Inspiration grabs us and then comes the discovery over time of how each one works best on the table. For us, it’s really the complexity of a game that makes it the most challenging to create.

MM: How did you convince Breaking Games to publish this board game?

Adam: Funnily enough, Shari, the owner of Breaking Games, sat down at my table while I was showing it at a convention. Her daughter loved the game so much that she came back about an hour later and threatened bodily harm if I didn’t publish the game with her. Our answer was, of course!

MM: When you initially pitched the idea, how different did the board game look compared to the current on-market version?

Kiva: It was sometime around February of 2018 that Shari told us that Ian Reed, one of her developers, had a theme in mind for the game. The cauldron and wands came out of that and kept the exact same gameplay and of course the eye-catching colors that had attracted so many people to the game.

MM: How many other board games have you designed and what are they about?

Adam: I have 36 playable game designs. They range from simple token board games to card games, to roll and moves, all the way up to complex 4x strategy games.

Kiva: I’m not quite as prolific a designer as Adam; I’ve only designed about 5 board games. They range from flying contests among dragons, to a math-based roll and write, to cooperative games about penguin survival or keeping monsters out of your town, to telling tall tales.

MM: To date, what has been the most rewarding part of working as a game designer?

Adam: The community. The board game community is the best community in the world. You have everyone from every walk of life, every race, creed, and cultural background, and we all get together to have a good time around a table. Nothing brings the world closer than kicking someone else’s butt in a board game.

Kiva: The intellectual exercise of creating a game and making it not only work but be enjoyable for the players is great. But I have to agree that the community is where my heart is.

MM: Where do you hope your career in the toy industry will be in ten years?

Adam: Are there millionaire board game designers? Can I be one of those?

Kiva: We started out with an ethos around wanting our board games to improve the world in some way, making people think differently and learn new things. We’d each like to keep doing that.

Adam: I should be showing “Something Wicked” on Tabletop Simulator soon. Other than that, our current 2020 plague sort of puts a damper on events. So, I have several playable board games, so if any game publishers need some, feel free to contact me!