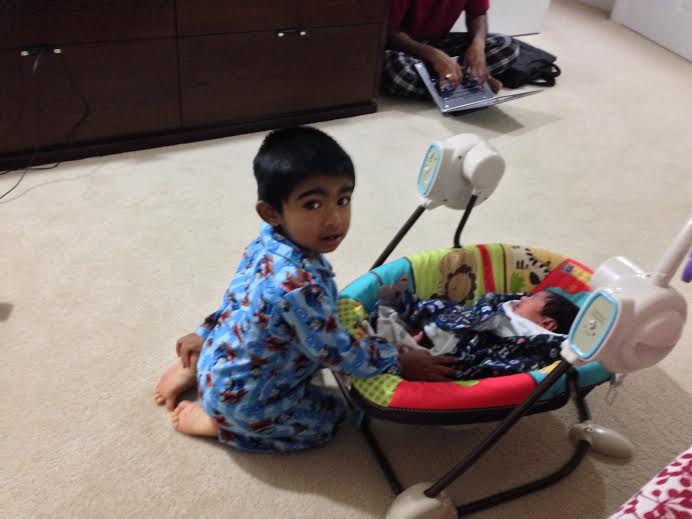 My sister has just had a second baby. Her first-born, Shriyan turned two just two days after the new arrival.

Its been a curious thing to watch this little guy express a range of emotions on this unexpected new arrival- though he knew his mom was carrying a baby in her belly, I suspect the full consequences hit him only after he saw how much the little fellow was usurping his world. His emotions range from wonder to elation to confusion to curiosity to jealousy to plain anger.

Wonder – Was this the baby inside my mother’s stomach all this while?
Elation- I have a toy that makes real sounds- and this really moves too, WOW!!!
Confusion– What the hell is he yelling for now? And why am I not supposed to be carrying him?
Jealousy– Has mom forgotten me? Why does she have to carry him all the time? Why cant he walk on his own like me?
Anger– Fine!!! Papa wants to save all his playtime only for him..Hmmph!!!I have had enough! I am going!!!

The last one was actually beautifully expressed by him just today…

Imagine how adorable a 2-year old would look when his heart is laden with sorrow but he is too indignant to beg anyone for attention and decides to announce to nobody in particular, “Nenu talupensukoni bajjunta…( I am off to sleep with the door closed)”- Yes..it was unbearably cute!

Totally spell-bound by the range of emotions for a human—and such a tiny one at that!!!

Here’s one for sibling rivalry!

We love you, Shriyan!

Of schools and homeworks!

The unseen and the untold…

The maladies of the new age!

The uncertainties of learning…