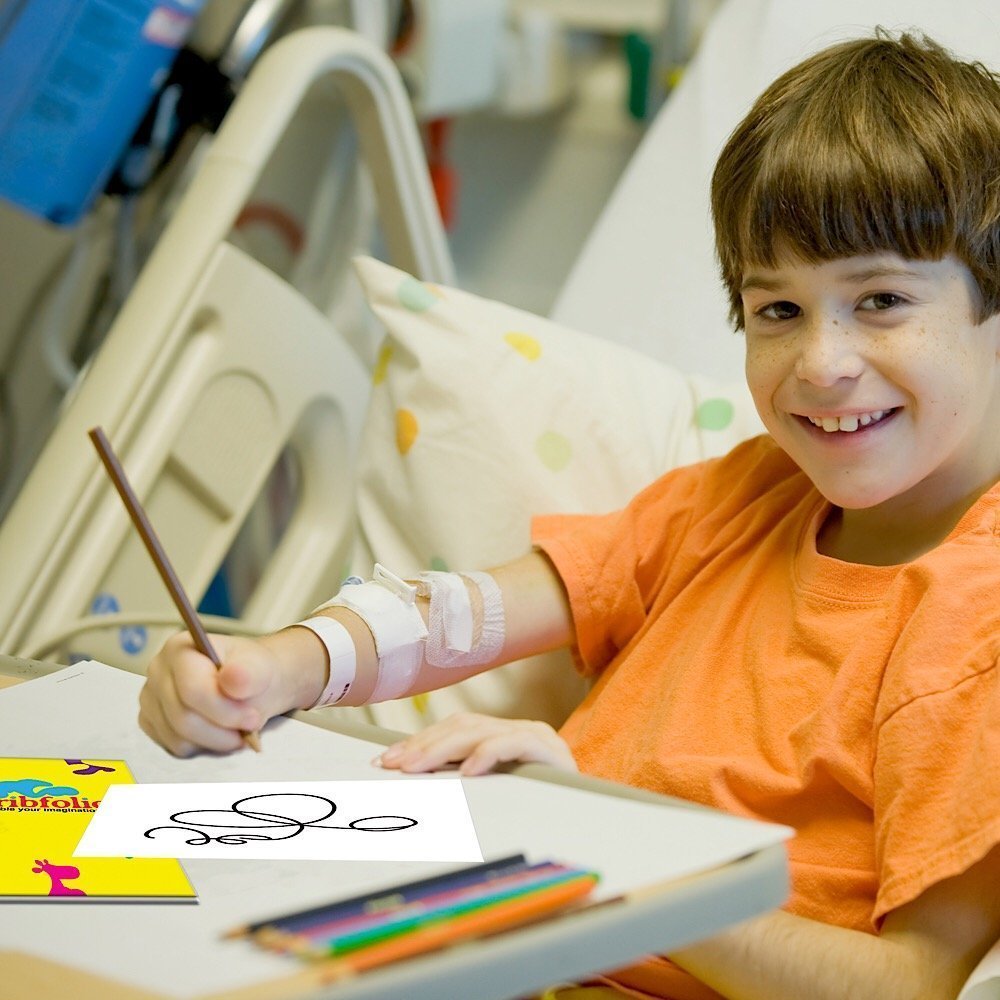 Many people remember looking up at the clouds when they were children and seeing an assortment of shapes and characters in the sky. Game designer Maggie Lynn Held used those fond memories to craft a creative game called “Scribfolio” which challenges children to see shapes in otherwise completely abstract scribbles. The award-winning “Scribfolio” fosters imagination and is partial to an array of possibilities and answers since no two people will ever see the same abstract image in exactly the same way. According to the official press release:

It starts with a scribble and imagination is key. Look from every angle. What do you see? Add lines, shapes, eyes, hat or sky. Give Scribble art a try. Title your work and sign your name. It’s super fun for your brain. Imagine, Create, Discover and Play when you do a Scribble every day. It’s amazing what a Scribble can turn out to be. The big question is… What do you see?

Funny enough, designer Maggie Lynn Held hails from a professional theatre background rather than one of visual arts. She performed in various venues around the United States and also explored the world of playwriting and artistic directing. TIn the fall of 2007 she began developing Scribfolio which was then called “Lil’ Abstracts LLC.” The concept was still the same but the approach was much more theatrical; Maggie’s vision was to produce an interactive coloring book where people could create a masterpiece from a simple Scribble using the catchy tag-line: “Look from every angle, What do you see? Now show me.”

Maggie has spent several years in the wellness and hospitality industry. All of these technique and modalities have helped bring the Scribfolio brand full circle. Maggie is thrilled to have the help and support of her friends and family as she introduces herself to the world once again, this time as an entrepreneur. Her goal is to spark imaginations and spread creativity one Scribble at a time. She was happy to grant Kidskintha an official interview to discuss her creation and her hopes for its future:

Meagan Meehan (MM): How did you get into art and design and when was the idea for Scribfolio first born?

Maggie Lynn Held (MLH): It was just a little doodle I did while gabbing on the phone in high school. After I had my second child I had the idea to make a coloring book of scribbles and ask people to use their imaginations to create a mini masterpiece. This was back in 2007 and at that time I called the company “Lil’ Abstracts LLC” I wrote a children’s play about colors to parallel the product. I continued to work on the project but more on the side until I launched Scribfolio in 2015, a re-vamped, re-designed version of the former product. I got into art and design by default. Through the product development process, I learned design elements and video making.

MM: What was it like to develop this product and how did you know which scribbles were the right ones to include?

MLH: Developing this product has been so fun. We love to look at the original design and see how much it has changed. I create all the scribbles and I usually pick the winners on a whim. Often, I will be ready to delete a scribble creation and one of my kids will walk up behind me and say “Don’t delete that one, I saw a shark.”

MM: Are you inspired by things like abstract art and the famous Rorschach inkblot test?

MLH: It’s funny, many people tell me that Scribfolio reminds them of the Rorschach Ink Blot test but I didn’t design it with that in mind. But I can totally see the connection. I actually am not a fan of abstract art, if I’m totally honest I like cheesy pop art that looks like a 1960’s ad.

MM: Who did you initially test this product on and what kinds of responses did you get?

MLH: We started out by testing this product in several elementary schools. We were amazed how the kids reacted to it. They got it right away. The majority of them raised their hand dying to tell us all about their scribble and the story they created around their scribble character.

MM: How did you move Scribfolio into production and what was it like to break it into the market?

MLH: When we launched it was in the schools and we attended some big education trade shows. We were well received but it wasn’t until we exhibited at the Destination Imagination global finals that we truly understood our target market.  Kids 7-15 years of age who demonstrate artistic, theatrical and scientific interest. It was soon after that when we expanded into the toy market as well.

MM: Where can people find the item now?

MLH: We are in a number of specialty toys stores around the county and we have an online store at www.scribfolio.com.

MM: You won a number of awards for Scribfolio…what was it like to get recognized in that way?

MLH: It was so fun and I have had a great time getting to know the organizations that hold the awards.  I hope to be more involved with a few of them in years to follow.

MM: What benefits do you think this game offers to children and how have you raised awareness of it?

MLH: Scribfolio is a new product and activity book that sparks imaginations, enhances creativity and nurtures 21st-century skills. We find that one of the best benefits beyond this is that it gets the kids talking. It opens up several conversations about perspective and acceptance. The kids get so excited to talk about their scribble and the story behind the Scribble. This helps them with their presentation skills (a lost art these days). We love seeing even the shyest kid come out of their shell and talk about their Scribfolio.

MM: How do you hope this game expands and evolves in the future?

MLH: Oh, we have so many ideas. I’m actually in the process of developing a screenplay with an old colleague titled “Scribble Town.” We also are working on possibly developing an adult scribble table game. In addition to that, even though when we first developed this product we intended it to be strictly handheld, we realize now that Scribfolio is more than pen to paper coloring. A good amount of people have told us that their favorite part is just finding the art in the scribble. This has helped us make the decision to move forward with developing a Scribfolio app.

Card Games: Pluck Off! For A Parody Of City Life

In the Media SpotLight, Music

Be a Pain: An Album for Young (and Old) Leaders by Musical Artist Alastair Moock

A Flair for Design: Interview with Matt Nuccio, CEO of Design Edge Inc.