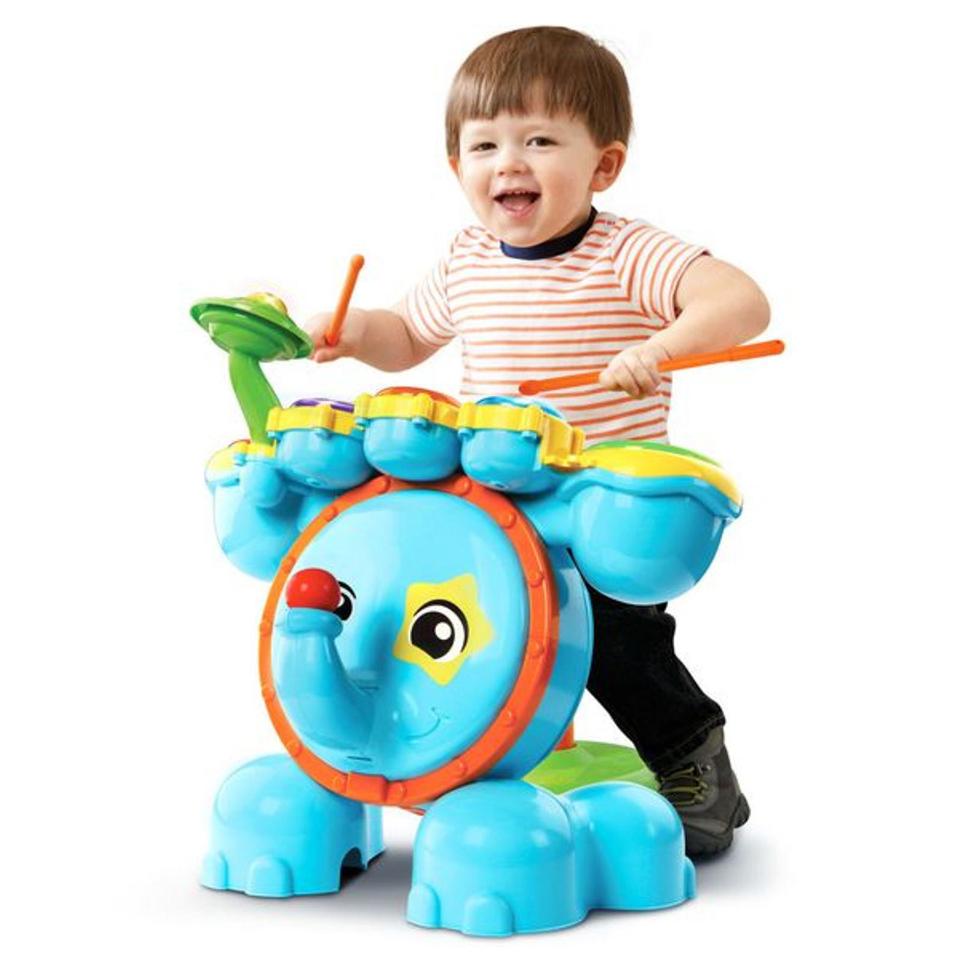 Drum sets are very popular toys for young children and a new edition by VTech has added an extra-cute flair to the classic drum set via their “Zoo Jamz Stompin’ Fun Drums” elephant-shaped new release.

How to Play the Zoo Jamz Stompin’ Fun Drums

“Zoo Jamz Stompin’ Fun Drums” is intended for children between the ages of 18 and 48 months. Although it is blue in color, it is ideal for both boys and girls and features over one-hundred sounds, songs, and melodies plus an array of gorgeously colored lights. As is typical of musical items in VTech’s “Zoo Jamz” series, the “Stompin’ Fun Drums” is highly interactive and encourages small children to enhance their creative thinking and motor skills by tapping out beats and creating their own sounds. Aside from the elephant drum set, the kit also comes with two orange drumsticks and a green and orange rounded stool which children can sit on as they play the drums. The set even comes with a pedal that, when stomped on by foot, causes the elephant’s trunk in the front of the drums (which looks as if it is holding a red ball, like an animal in the circus) to bang out a deep percussion.

“Zoo Jamz Stompin’ Fun Drums” comes with a number of pre-programmed games that aim to teach kids about colors, numbers, lights, and more. It is also pre-programmed with classic tunes like “Old MacDonald Had A Farm,” “Row Your Boat,” “Happy Birthday,” and more. Four different game modes enable children to tap the drums to learn counting, catch the lights, follow the leader or create their own composition. The drums also give kids the option to hear different kinds of sounds (like animal sounds, orchestra sounds, and rock ‘n roll sounds) when they hit each individual drum. Parents will also be happy to note that there is a sound-control feature on the set.

Although adorable and functional in the sense of teaching children about musical beats, this toy does have some downsides in that it can be difficult to decipher exactly how to get it to play exactly what you want it to. For instance, the drum will behave differently depending on which of the four “sections” it is on…yet it can be tricky to figure out which modes will get the songs to play rather than simply having the drum go through its regular spiel of trying to engage children (which can become very annoying, very quickly). It is also quite bulky (despite being lightweight) and hard to store.

Given that this is a musical toy, it serves as a great gateway to discussions with your children about music and musicians. Topics such as the history of songs, learning lyrics, and hearing about famous drummers are just some of the possible results of playing with this set. It is also a good opportunity to make up games centered on movement, like dancing until the music stops.