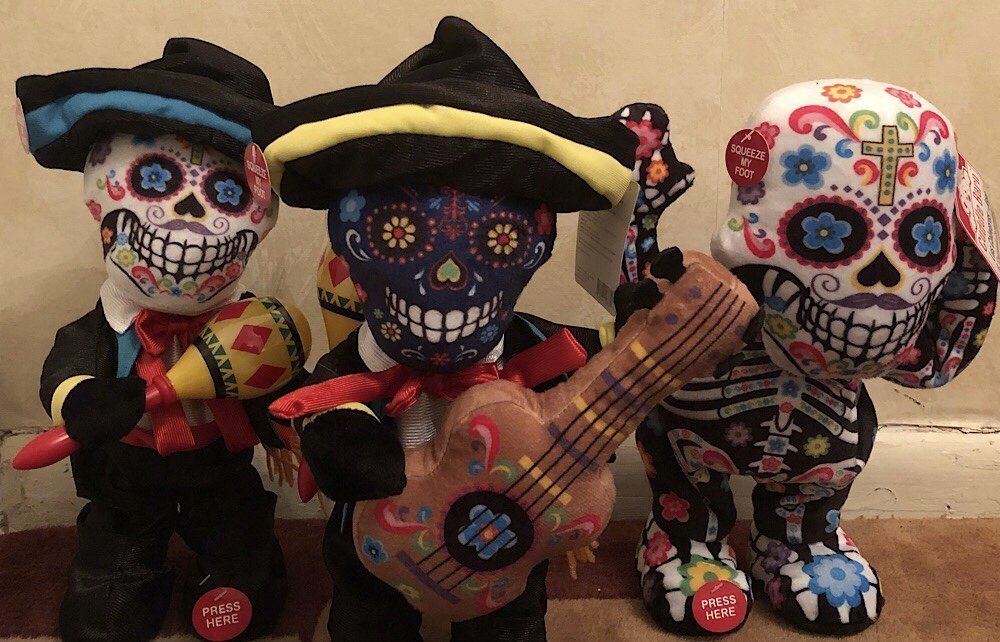 “Las Calaveras” are a new series of musical sugar skull toys by Cuddle Barn. Sugar Skulls are become increasingly popular throughout the United States and the world. Driven in part by films like “Coco” that celebrate Mexican culture, “Sugar Skulls” are colorfully decorated skeletons that are used to celebrate the “Day of the Dead” (“Dia de los Muertos”) which falls annually on November 1. Recently, a company called Cuddle Barn released three sugar skull animatronic plush toys in honor of the holiday via their “Las Calaveras” collection.

“Las Calaveras” translates into “The Skulls” which is very befitting of this series of three sugar skull characters who are clearly part of a mariachi band. One of these skulls is named Pablo; he has a white face, wears a tuxedo and a sombrero, and plays the maracas. On guitar is Pedro who has a blue face and is also wearing a tuxedo and a sombrero. Finally, there is Jose, a complete sugar skull who does not wear a tuxedo, a sombrero, or hold an instrument, but who is the most colorfully decorated and obviously the lead singer of the band. When you push a button on each figure’s foot, they start to sing a song in Spanish called “Chumbala Cachumbala.”

All of these figurines are adorable, cheerfully colored, humorous, and beautifully designed. Although they are ideal for the Halloween/Day of the Dead season, they are charming enough to be left out all year long. Their singing voices are clearly recorded as is the upbeat and catchy music that they play. They also move very fluidly.

Although the sound quality of these toys is excellent, it can get annoying to listen to them out of sync and they can play for quite a while if you don’t shut them off by re-pressing the button. Moreover, the song is entirely in Spanish and no lyrics come with it, so if you do not understand the language you will lose some of the charm of these items.

“Las Calaveras” are a cute and fun collection of dancing plush that are a fantastic way to celebrate Mexican culture and/or introduce children to it. These items are a wonderful way to open conversations about the Day of the Dead, the beliefs surrounding it, and the way the holiday is celebrated.

Easter Basket Ensembles: A List of the Best Easter-Basket Gifts for 2019