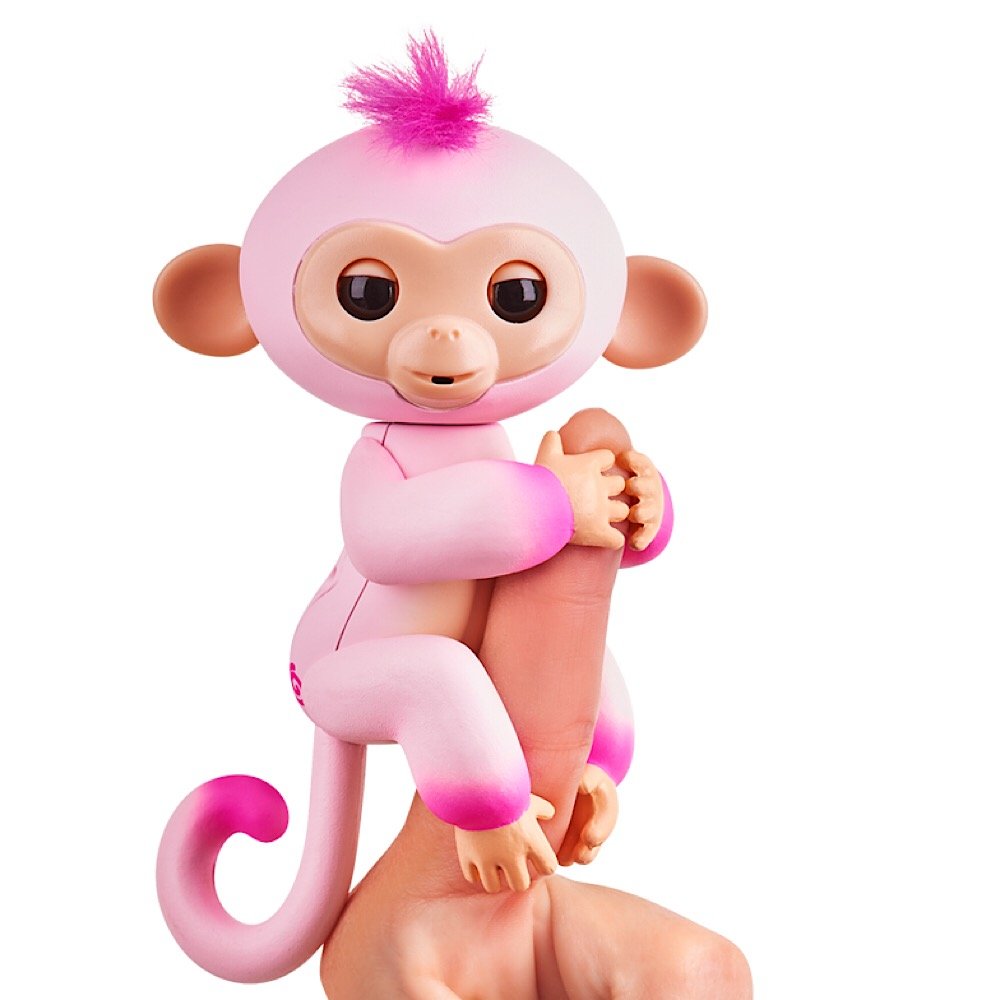 Fingerlings by WowWee is a perfect example of how robotics and toys can be paired very well together. Intended for children ages five and up. Fingerlings, a hit series launched by WowWee launched in 2017 as a series of small, colorful, and very lifelike little monkeys. Retailing for only $15.99, they were collectable and affordable which resulted in them skyrocketing to popularity. As the 2018 year kicks off, WowWee has plans to expand the line from merely monkeys into unicorns and sloths…with much more to come in the future. Additionally, the monkey figurines are getting cute updates with impending models coming in two-tone and glitter options.

Fingerlings are small toys that are designed to grip onto fingers or hands via their arms and tail. As small robots, the Fingerlings are infused with multiple touch-sensors so they know when they are being touched on the head, stomach, or sides. When you hand them upside down and swing them, they say “WEEE!” Fingerlings are also designed to appear curious about the world around them. They are highly interactive and even blow kisses and babble and chatter like living creatures.

Fingerlings are very lightweight and fit easily into your hand, essentially strengthening their “cuddly” aesthetic. The cute sounds these toys emanate are heart-meltingly adorable. The little monkey also blinks its eyes, turns its head, and responds to touches on the belly, head, and elsewhere due to touch-sensors which renders it shockingly life-like. Their hands are positioned in a way that let them easily grip on your finger and their curled tails easily hook onto backpacks, hangers, and more. The bright colors and soft patch of hair on the top of their heads, makes the Fingerlings very pleasing to look at which adds to the collectability factor. Moreover, the Fingerlings can “converse” with one another when two of them are facing each other. Best of all, they retail for $14.99 and are therefore very affordable. The batteries are in the toys, so they are ready to be played with right from the box.

The biggest drawback to the Fingerlings is that they come one in a pack so you need to spend about $30 to see two interact cutely. Their legs and arms are also stationary so, although they are cute and do grip onto things as advertised (as do their tails), their arms and legs otherwise do not move which somewhat detracts from the otherwise life-like qualities. They are also a little bit too delicate to handle being hit against hard surfaces, so putting them on backpacks could result in them breaking. They will also likely not do very well in heavy rain.

There are many great ways to play with the Fingerlings. Although they come with assigned names you can have fun making up your own names and personalities for the monkeys. Moreover, you can create little “jungles” playsets for them out of cardboard, papers, and other found and/or recycled objects.

“Fingerlings” retails for $15.99. Look out for additional models that are due to be released later this year. To learn more, visit the official website of WowWee.

Also Read: Dodgeball: From Outdoor Game to Inside Challenge