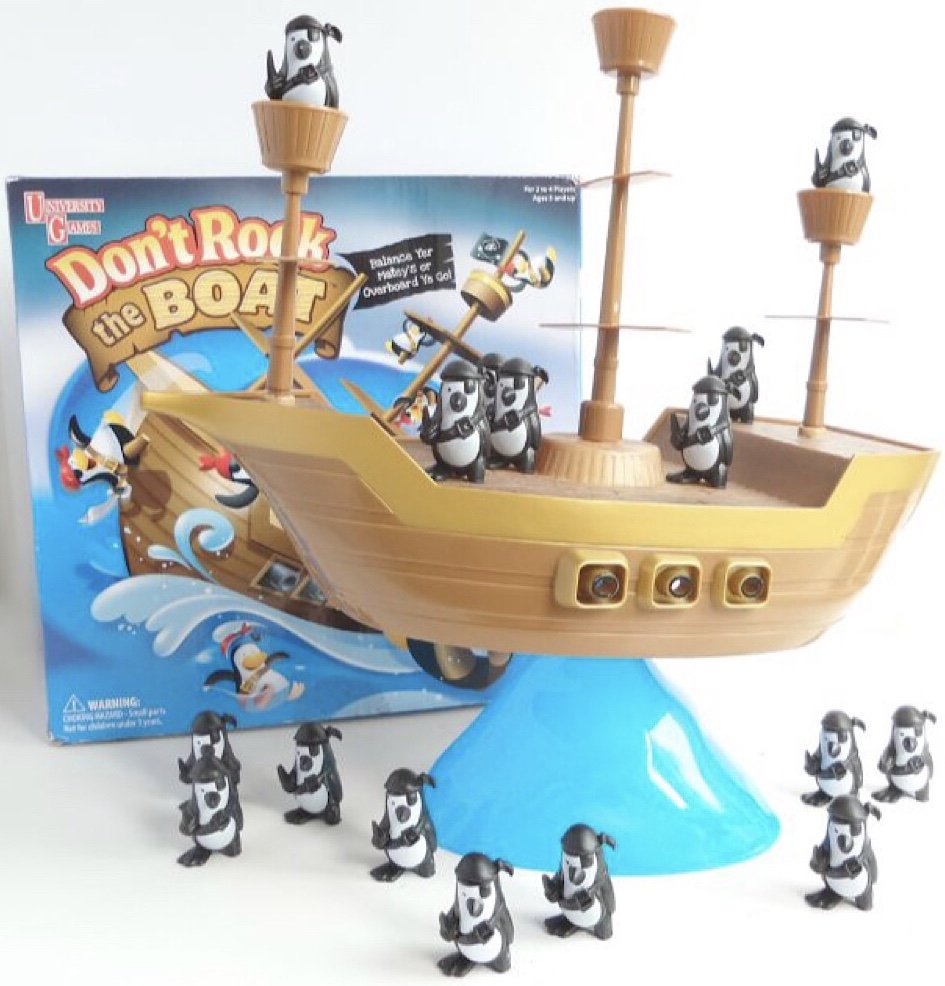 Don’t Rock the Boat is a new balance-themed game by Play Monster that blends pirates and penguins. Although this might seem like an unlikely pairing, they work perfectly well together when it comes to this quirky, original, and very enjoyable item. Neither a board game nor a card game, Don’t Rock the Boat relies on a person’s sense of balance…and it is much trickier than it looks. Although this game is intended for children as young as five, it can be fun and amusing for adults too.

The Don’t Rock the Boat box comes complete with a three-piece pirate ship that includes three masts and two planks. There is also a blue wave (symbolizing ocean water) which must be separated to attach and secure a blue balancing rod. The pirate ship can then be sat (aka balanced) upon this rod. The set also comes with sixteen adorable playing pieces: ten pirate penguins (all of which have a unique feature, such as the one with the parrot, one dressed like a ninja, the captain, etc.), one crab, one octopus, one canon, one treasure chest, one ship wheel, and one anchor. The rules contained in the box are very easy to understand: essentially, you simply put the set together and then try to get ALL the pieces onto it, without rocking the boat to the point that it tips over and sends the pieces flying in every direction. As simple as this might sound, it is not an easy task to achieve!

This game is extremely cute and visually appealing. The penguin characters are very detailed and have a lot of personality as do the octopus and crab figurines. The pirate ship itself and the wave that serves as the base are also very well-rendered and will obviously impress children who are fans of pirates. The set is quick to put together and quick take apart and the box is small enough to be stored easily. Although the company suggests that players be aged five or older, younger children could play this as well, as long as an adult supervises to ensure that they do not try to eat any of the smaller pieces. This game is also extremely challenging and, for that reason, it will hold appeal to older kids, teens, adults, and seniors as well as smaller children. Hence, when the box says “5and Up” it can truly be interpreted as for ages “5 to 150”!

While there are very few drawbacks to this marvellous game (aside from the tiny choking-hazard pieces which could be problematic in homes with very small children), it is very difficult to get all sixteen pieces onto the boat without it tipping over. Hence, it can become frustrating–even maddening–to repeatedly try to complete the game without the boat toppling. Hence, some young children might find the challenge borderline overwhelming. Another factor to note is that the game contains small pieces which could easily get lost, so it is best to put them in a zip-lock bag before placing them back in the box after gameplay to ensure that none will get separated and subsequently go missing.

This adorable game is so well put together that it essentially doubles as a playset. Simply remove the boat from the “wave” base and it will sit squarely on a surface. Then children can play with the penguins and other figurines just like they would a standard playset. In fact, this game could even hold appeal for adults who are interested in stop-motion animation given its set-like qualities.