Skip to Content
Home / In the Media SpotLight / On bringing the first animated Sanskrit movie to the next generation: Interview with Ravishankar, creator of ‘Punyakoti’ 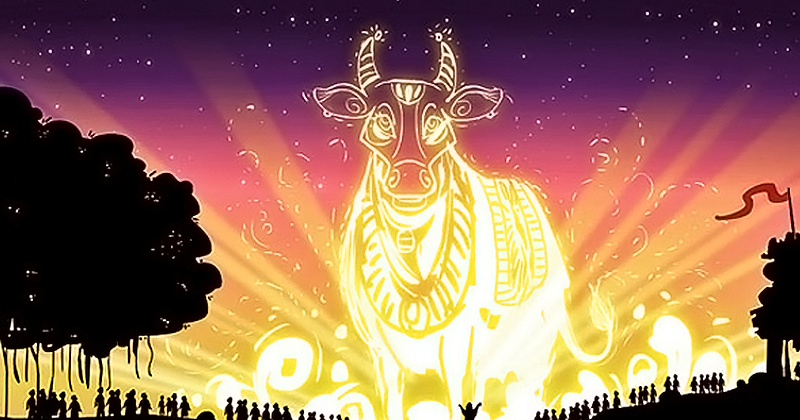 In the recent years, Sanskrit – a language known to be one of the oldest languages of the world has seen an uptick in the attempts for its revival. Young people have taken to speaking on global platforms about the beauty of the language. Technology and Social Media have played a huge role- YouTube channels that host Sanskrit lessons,  archaeological discoveries that are more open to the public, even esteemed science magazines talking about the innate richness and scientific basis of the language. ‘The Sanskrit Effect‘ is now a popular term dominating the neuroscience world.

As expected, making a movie is no mean job. With a day job to keep at Infosys, Ravishankar was crunched for resources on all fronts – men, money, time. He began with nothing but the pledge of support from a few of his animator friends.

Willing to experiment with new formats of movie making, Ravi approached Wishberry, a crowdfunding platform and laid out his dream.

Within 3 months, his idea raised INR 40 Lakhs from people across the world. The idea caught fire so rapidly that it caught the attention of some extremely talented and famous personalities in the fields of music, movies and art, many of them coming forward to do their bit for the project.

We spoke to Ravishankar on his journey from the days of being a passionate dreamer to becoming a doer and inspiring hundreds of others along the way.

You are doing the world’s first animated movie in one of the world’s oldest languages, Sanskrit. How did you gain the inspiration to pursue such a unique endeavour on the story of Punyakoti?

Whoever hears the Punyakoti song breaks out into tears; it is such an emotional and evocative piece. The story speaks about two important virtues: Satya(Truth) and Dharma(Right action). I wanted people everywhere to hear the story and wanted to preserve it for the generations ahead.

Is there a reason you chose to do an animated Sanskrit movie on Punyakoti vis-a-vis a normal movie?

This is a movie where tigers and cows talk. It will be easier to depict such things through animation. Also, my expertise is in animation and I don’t have much exposure in making live-action movies.

How did the initial funding happen? Tell us about your journey?

I conceived the film towards the end of 2014 when I wrote a children’s picture book in English based on the Punyakoti story. It was later translated to Sanskrit.

In 2015, we decided to make a movie. We could not find producers for it. Mohandas Pai, who was the ex-board member of Infosys, suggested that we take the crowdfunding route. Wishberry helped us raise 41 lakhs to begin the production of the movie.

You have roped in stalwarts like Ilayaraja and Revathi for the movie. How did that happen? 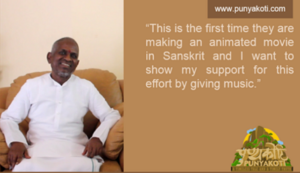 I met Raaja Sir in Chennai through a friend and told him about the project. He was very encouraging about new experiments in cinema which came as a big blessing to me!

Actress Revathi also came to know about the project from her friend and promised to support. I did not have to do any convincing. This is the greatness of these artists.

You are producing a Sanskrit movie. Did you need training in Sanskrit for the production of this movie?

I attended the Sanskrit Shibiram by Samskrita Bharati. I attend weekly classes for the last 3 years to keep in touch with the language. There are Sanskrit experts within Infosys, where I work at present, who are coaching me.

How much more do you require for the successful completion of the movie?

We need another 15-20 Lakhs to complete the movie after we have accounted for our own savings. Wishberry is running a campaign to help us reach this target amount.

You can contribute to the making of the world’s first Sanskrit animation movie HERE.

What other ways can we help you, apart from donating money?

We have come this far purely on the power of support from ordinary good-hearted people. I am relying on the same support for spreading the word after the film is ready.

I would like every school in India to become part of this campaign as school is the place where values are learnt. Today every family is on a WhatsApp group and a simple forward to every school teacher would help Punyakoti reach the student community. Since good deeds often require many reminders, we ask that each person forward it at least 6 times.

A company called Picture Time Digiplex in Delhi has promised to show it in travelling theatres once it is released, and we are grateful for such a show of enterprise. I look forward to the support of startups in media and entertainment space.

What, in your opinion do you think are other measures we can take to preserve this ancient language?

Sanskrit is made up of a small set of ‘dhatus’ or root sounds. They are connected through logical algorithms to express whatever we want to communicate. This kind of structure and brevity does not exist in any other language. We can improve Sanskrit vocabulary by including more common Sanskrit words in our day-to-day expressions.

Learning Sanskrit is like getting the key to a treasure and parents and teacher should take an active role in preserving the language.  Once you explore the kind of works that have been done in the last 4000 years in Sanskrit, you will be shocked to see how advanced the Indian mind was in those days.

We look forward to the completion of this ambitious project and would be excited to know when it’s done.

You can contribute to the making of the world’s first Sanskrit animation movie HERE.

Ravishankar is reachable on ravi@punyakoti.com