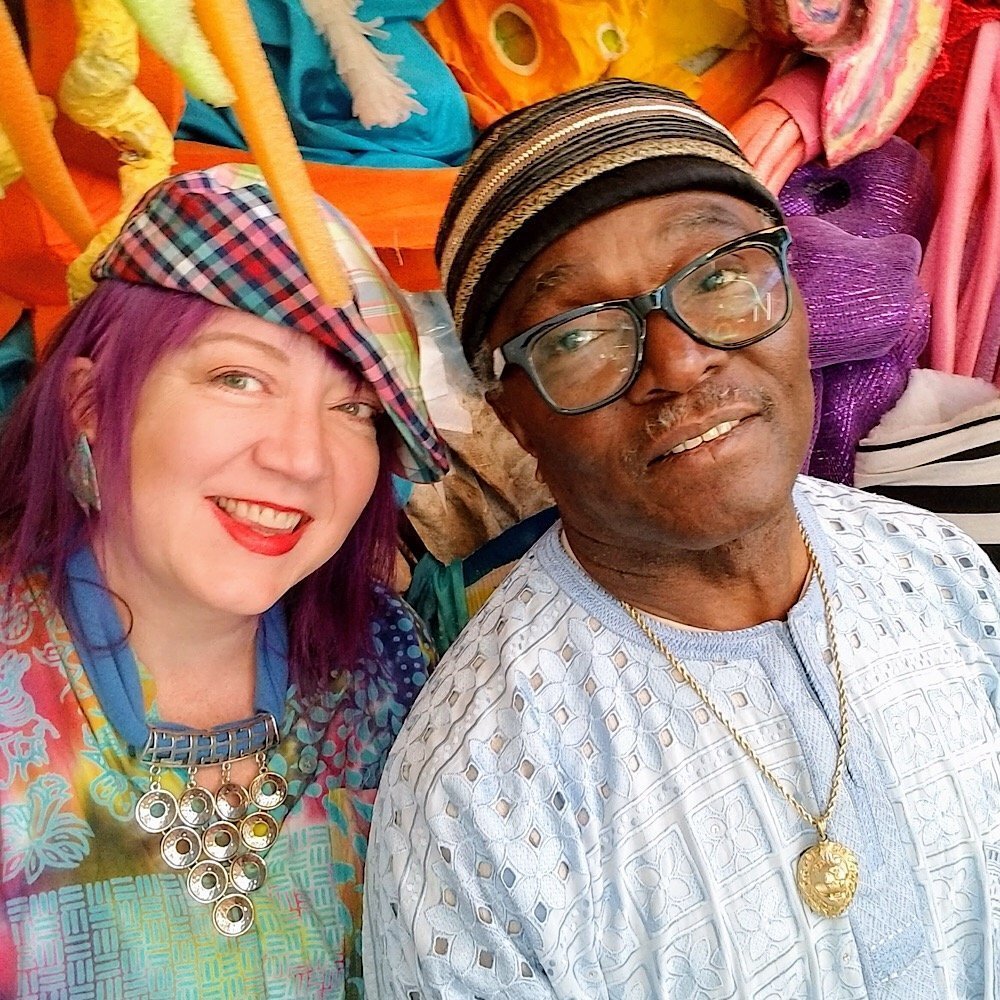 Papa Siama and Auntie Dallas love music and bringing it–especially AFrican-styled music–to children and adults alike. Africa is a place with a rich history of music, art, and culture. Siama Matuzungidi, originally from Zaire (now The Democratic Republic of Congo), was a top studio and touring soukous musician from the 1970s-90s. In mid-1990, he moved to the United States and continued his musical career in Minneapolis. Over the years here in the States, he has performed widely, and has won critical acclaim for his expert guitar playing and engaging style. He released the critically acclaimed album “RIVERS – from the Congo to the Mississippi” in 2016.

With his musical and life partner Dallas Johnson, he has also been performing lots of shows for families, where tots as well as their grown-ups dance and play along to their acoustic songs reminiscent of the traditional and rumba music from Siama’s childhood. Kids can even try out various percussion instruments as they sing along at these sessions.

As their family fan base and repertoire has grown, they wrote new songs and decided to release a first “Papa Siama and Auntie Dallas” album, The Land of Yangalele. (Yangalele means happiness in Kikongo.) You may stream this new album now via siamamusic.com, and it will be available nationally from various music sources on March 23. Recently, we asked Siama and Dallas a few questions about their family friendly new music.

Meagan Meehan (MM): How did you get into music and how did your childhood in Africa influence your style?

Siama Matuzungidi (SM): I grew up around traditional Congolese music and our family and whole community always sang, played shakers and drums and danced in the evening. Growing up that way influenced me a lot because whenever I have an idea I can see myself as a little boy. You could say all of my ideas I compose to excite that little boy I used to be.

MM: What were some of the biggest culture shocks you experienced when you moved to the US?

SM: Not hearing the music I grew up with was a big shock. There weren’t any musicians here who play my style so I had to begin right away learning many other styles like folk, reggae, calypso and soca. I started listening to jazz for the first time and started buying lots of guitar books so I could learn new scales and ways of playing. The other shock when I moved here was not having lots of people on the streets greeting me in the morning. I had to learn not to smile and greet people I don’t know. That was really hard. Now I’m happy we live in a neighborhood with a lot of foreigners so we all smile and greet each other all day long even if we don’t know the same language.

MM: How did you get your songs popularized in the United States?

SM: When I received a McKnight Fellowship in 2014 it gave me confidence because it showed that people outside Africa could care about my music. Before that I only played electric guitar in other bands. My wife Dallas and I started booking my own gigs and as soon as I started playing acoustic guitar I remembered the traditional music and rumba from my childhood back home and it inspired me to compose new songs and tell stories during my shows. In the beginning we’d play for one or two people but they would say encouraging words and we loved the feeling of the music too so we kept going even if the people and the money weren’t there. Slowly by slowly (“malembe malembe” in Lingala) our audience grew. Releasing my album in 2016 (“Rivers – from the Congo to the Mississippi”) really helped give us a boost too.

MM: How do you incorporate messages and/or African culture into your songs?

SM: My songs have African drumming, language and melodies and I like to tell stories in my songs. When I’m composing I imagine how I’ll get people to sing and feel like a part of it. Back home music wasn’t for showing off or an ego thing. Music was for everyone to share happiness. Even my songs that seem sad are really to make people remember good times in their past. The biggest message of my songs is always happiness. Mama always told us finding happiness is a very important thing because that’s what we give the world. My happiness is music.

MM: Have you any songs that are particular crowd pleasers?

SM: People get excited when I play “Malembe” (from my “Rivers” CD) and “Ko Yimbi Ko” (from our new kids’ CD “Land of Yangalele”). Those songs are really fun to dance to and easy to sing along. Also, I’ve been teaching myself to play thumb piano and people love it. The sound makes them relax and feel peaceful. When we play it for kids Dallas has them close their eyes and imagine being in a wonderful place. She says that if they get stressed out they can close their eyes and remember listening to thumb piano and being calm.

MM: What can people expect from your concerts?

SM: Relief from stress and healing from the music. I like to take people on a journey together so we can all have fun and leave stress of the world behind.

MM: What is your latest album like and what were some of the inspirations behind it?

SM: Kids were the inspiration! When we started playing acoustic music little kids started requesting songs. We were so surprised that they knew song titles in Lingala and other languages. At first, we just thought it was cute but the interest grew really fast and soon we started writing songs especially to make kids happy. We wanted this CD to sound like music from my childhood. We wanted it to be music the whole family would enjoy. We made the music sound welcoming so everyone can sing and play and dance together as a family. That’s why we included lyrics and guitar chords and games in the book inside the CD…to give everyone the feeling of my culture because it’s good to be encouraged. We want kids to feel creative and feel involved in something that makes them happy.

SM: We are excited to perform for kids at lots of libraries and special events this year and in May I’m recording a new CD of songs on different thumb pianos from countries all over Africa, each with its own design, tuning and name, for example mbira, kalimba, likembe and illimba. I’m going to record the songs outside, near the Mississippi River during the time of many spring songbirds so the river and the birds will be like my band for this new project. I’m excited to share this music with a new audience I’ve never had before…healers and people who meditate and do yoga. Usually my music is more for singing and dancing. That’s healing too but this next one will be for calming and finding peace.

“The Land of Yangalele” is available directly from www.SiamaMusic.com now, and it will be available from various retailers on March 23. Music videos and several public family concerts are planned at Twin Cities libraries and community venues this spring and summer and they’ll perform in Nashville and New York City in the fall.

Watch a special Twin Cities PBS program about Siama’s life and music here or watch him playing mbira with singing birds near the headwaters of the Mississippi River on his YouTube channel. Siama’s Facebook, Soundcloud, Youtube, Instagram are also good ways to follow him.