Skip to Content
Home / In the Media SpotLight / “Mythical Sylme”: Review of a New Series of Slimes 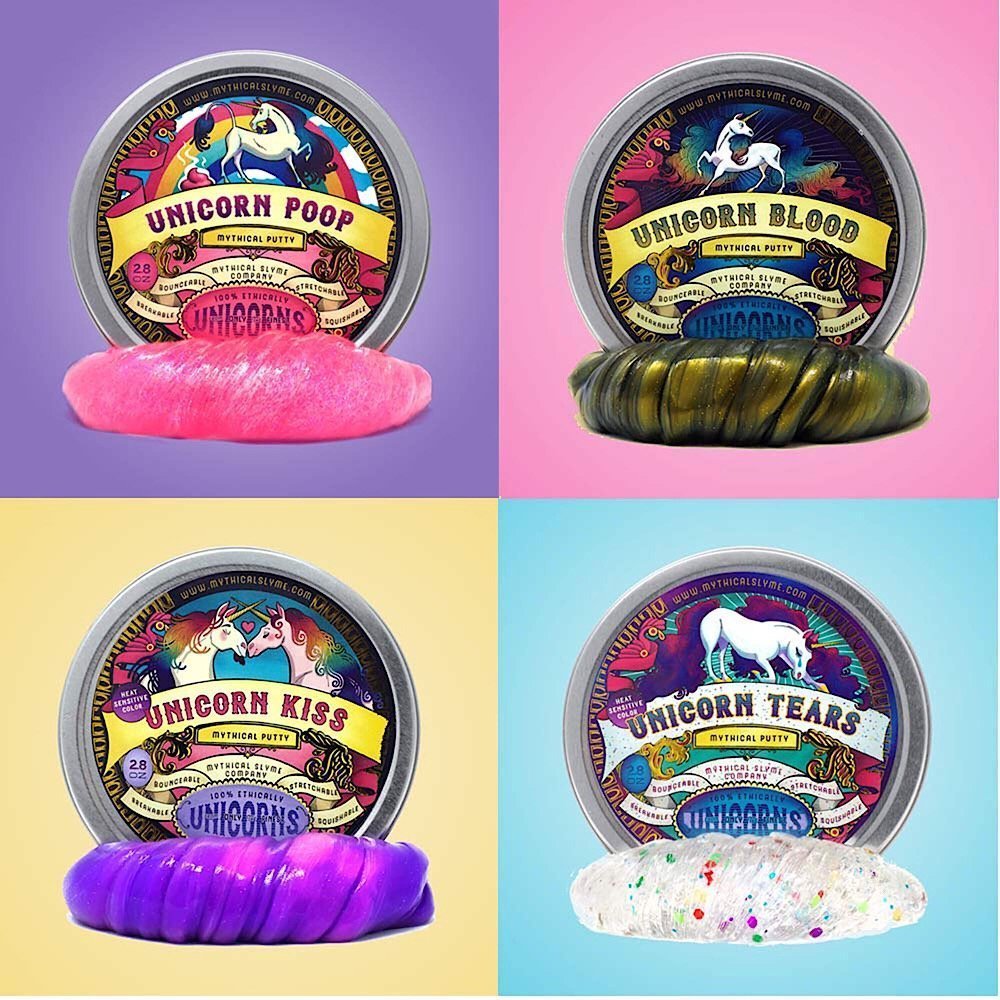 “Mythical Slyme” is a product of the times. Unicorns and potty humor are both huge trends in the toy industry and the two trends have been combined via a new kind of squeezable, stretchable, twistable slime—infused with shimmery goodness and shininess, of course—called “Mythical Slyme.” The line includes gooey putty tins of Unicorn Boogers ($13.99), Unicorn Tears ($13.99) and glittery pink Unicorn Poop ($13.99).

Slime and putty toys offer something different for kids who enjoy messy sensory play. The main difference between slime and putty is that slime dries out and is stretchier while putty never dries out and tends to be firmer.) Like jumping into a puddle, kids adore the opposite of staying tidy and clean. Sensory play allows children to utilize and understand all five senses. It builds their creativity and learning through exploration. Playing with slime encourages the development of fine motor skills and coordination! It’s vibrantly colored, soothing to the touch, and won’t dry out quickly. When play is done with Mythical Slyme, the gooey mess goes right back into the tightly-capped tin.

Recently inventor Lana Li discussed the creation of this fun, zany, product line and the formation of her slime-centered company.

Meagan Meehan (MM): How did you initially get interested in the toys/games industry and why did you focus on slime in particular?

Lana Li (LL): I always loved arts and crafts and creativity as a kid. I saw an opportunity with slime to do something fun with packaging and design. I think that a lot of these types of products aren’t ambitious with how they approach branding and I think kids (and adults!) deserve products that are beautiful and well thought-out in every dimension.

MM: You’re signature series involves sparkly and/or glittery and shiny slime with names like “Unicorn Kisses” and “Unicorn Boogers” so how did you select these names and how many are there in total?

LL: I thought the idea of unicorns donating their literal blood, sweat, and tears to a “nonprofit” was a hilarious concept so I came up with as many mythical bits as I could think of. We have a total of nine colors!

MM: How did you think up the colors and glitters for each one?

LL: It was a combination of experimenting with glitters we ordered as samples as well as looking to other industries for inspiration – for example, eyeshadow glitters! With Unicorn Sweat, I just happened to be playing around with clear putty and mixed in a bit of white iridescent glitter and absolutely loved the effect that it had.

LL: Indeed, we’re working on several new animals for the fall and a Halloween-themed line!

MM: How difficult was it to start your own company, how did you get the products marketed, and how do you hope to expand the company?

LL: It’s more persistence than difficulty. It just takes a long time to get even a fairly simple product like this to market. We were lucky since the reception has been quick and positive with the slime. I’d like to expand into more animals as well as other mythically-themed lifestyle items in the future – we have a wonderful illustrator that we work with!

MM: Overall, what have been some of the coolest feedback from fans?

LL: Some people have used it to help with ADHD, others tell us about how they play with it every day, and some fans are so dedicated that they post practically every day to Instagram and help us publicize our sales on their social media accounts! It’s been pretty crazy. We’ve also donated some slimes to charities for sick kids which has been nice to contribute to! We love feedback from fans so if you have any ideas for products we should release, please do let us know!

Thunder In My Arms: Interview with Musical Artist Lissa Schneckenburger

Mego: The Return of a Famous Toy Company

Review: Blackboard by Boogie Board