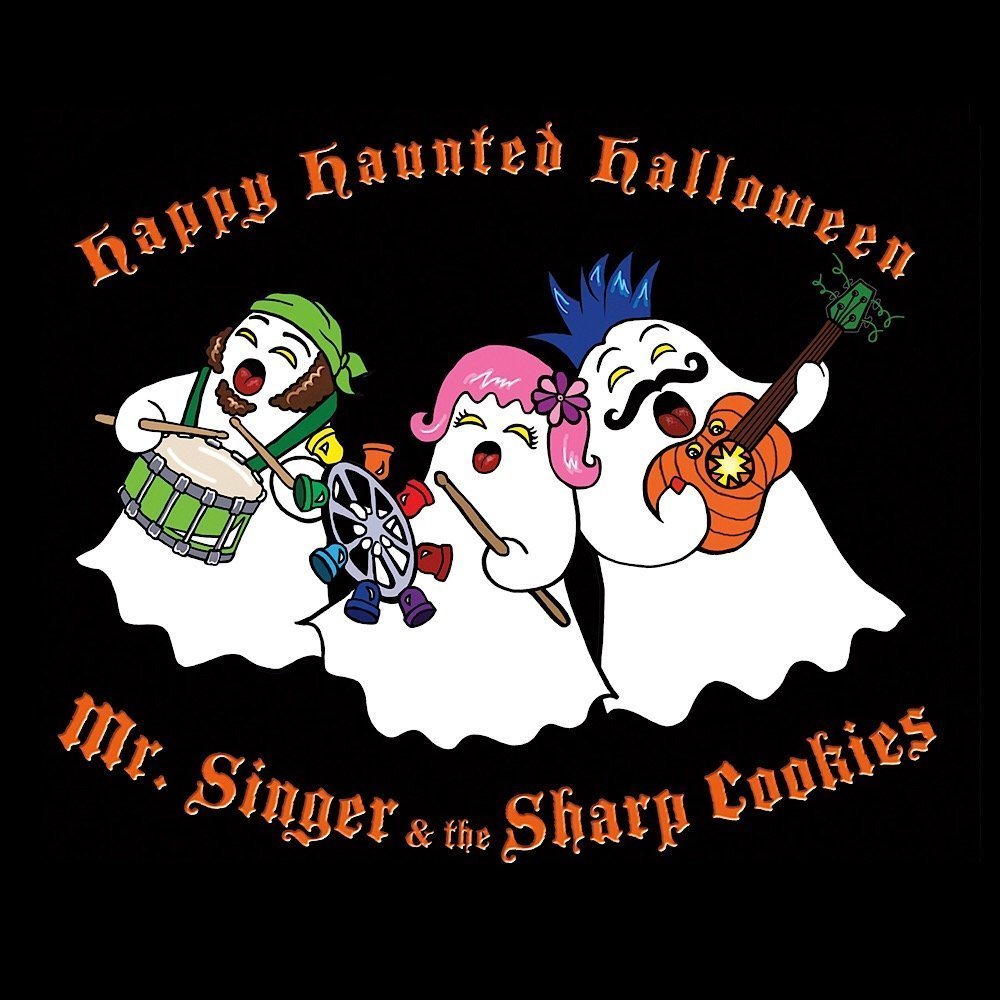 Mr. Singer & the Sharp Cookies is preparing to go all out for the season of ghosts and goblins with their fourth album, “Happy Haunted Halloween” which is set for release on October 5, 2018.

“Happy Haunted Halloween” offers something for everyone who loves Halloween: spooky songs about haunted houses, ghost towns, crawl spaces, and monster hunters; sweet songs about gathering with friends, dressing up as a cuddly bunny, and counting trick or treat loot; and even an historical song about the brilliant teenage author, Mary Shelley, plus a dance number inspired by her novel Frankenstein.

Mr. Singer & the Sharp Cookies are the husband-and-wife team of Neil and Kerry Firstenleit (“Mr. Singer” and “Kerry Appleberry”), along with dynamo drummer Michael Massett (“Marius Mustard”). The band’s rocking, electric sound has been praised by parents and kids alike. Both onstage and in the studio, Mr. Singer and the Sharp Cookies specialize in fresh, positive, high-energy music at kid-friendly volumes, sneaking a little mischief, a little sweetness, and a lot of fun into their clever originals.

Recently Neil Firstenleit (aka “Mr. Singer” of Mr. Singer & the Sharp Cookies) discussed his career and more via an exclusive interview.

Neil Firstenleit (NF): Music has been a driving force in my life since early childhood. My older brother Joey played, and most of my friends in my small town did too. One of the cool things about making music for families is I can express myself with a wide variety of emotions and genres. Kids are open to different styles and sounds. This suits me well because I like to write all kinds of songs from folk to punk.

NF: I am open to starting a song in every way imaginable, but most of the time I pick up my guitar and start strumming some chords and the lyrics and melodies come at the same time as I sing them over the chord progression. Instrumentally I’m a jack of all trades, master of none. I play every instrument I get my hands on, and the inspiration and limitations of a new instrument always produce a new song.

MM: How did you come up with your unique stage names?

NF: My wife Kerry’s mom used to call her Kerry Appleberry when she was a little girl, and it was her mother who encouraged her to join the band when Kerry was feeling pretty shy about being a performer. I started making music with kids when I was in my early twenties, and since the kindergarteners called their teachers Mr. and Mrs., I thought it would be fun to go by Mr. Singer. It stuck. In the band, Michael Marius Massett goes by his middle name (after his grandpa). He is a fan of mustard, liked the alliteration and went with Marius Mustard.

NF: Halloween is my favorite holiday, and inspiration always strikes around this time. Each year for the past fifteen years or so, I’ve written Halloween songs for kids. Happy Haunted Halloween compiles the fourteen best songs of the collection; it’s a fun album you could play on your porch as kids come trick or treating, at Halloween parties, or in the car anytime you want to get psyched for Halloween. Happy Haunted Halloween is collection of songs that celebrate chocolate, ghost stories, mystery, friends & neighbors, facing fears, bonfires, dance parties, haunted houses, oh man I could go on all night! I always love recording with my wife Kerry, my great friend Marius, our niece and nephews and our young LeitHaus music students. Experimenting with eery Halloween sounds and song arrangements was a bonus.

NF: My favorites and the fan faves overlap pretty well, and they tend to be the songs that write themselves in ten minutes like, “Just for Fun,” “Going to a Party,” “Rathputin the Rattlethanke,” etc.

NF: I love making music with families, all over the city, at our music school LeitHaus Studios Chicago, the Lincoln Park Zoo, and at the Sharp Cookies’ Beat Kitchen kids’ concerts. I love my job!  One of the most memorable and meaningful experiences is playing in hospitals.  Making music with kids in hospitals is a profound privilege. I am grateful for the opportunity to ease some suffering and share some joy with these awesome kids! I’ve experienced music’s transformative power many times with many children doing this important work. I’ve seen kids slumped in their beds perk-up, worried kids become happy, upset children become calm, quiet kids sing out and I’ve seen tears turn into laughter. Music is magic and it is a blessing to share this magical gift with children who really need it.

NF: I’ve always liked kids. I bought my first real electric guitar with money I saved babysitting the neighbor kid. I still play that Telecaster in the band. I had been a live sound engineer for a few years when an opportunity came up to be a music teacher at a kindergarten, it sounded like fun, and it was!

NF: I’m already living my dream of being a professional musician, so everything on top is icing. I would like to release all of the hundreds of songs I’ve written but not produced. I used to be a perfectionist, and it took 12 years to release the first two Sharp Cookies albums. The whole time I was writing more worthwhile songs. The last two albums came out in less than 12 months and I love how they both sound!

Kerry is an amazing painter. You can see her work here:

Previous albums by Mr. Singer & the Sharp Cookies include Going to a Party! (2017), Bouncing Ball of Energy! (2012), and Muddy Water Beaver Dam (2005). “Happy Haunted Halloween” will be available at all digital retailers, including iTunes, Amazon, Google Play, CDBaby, and more. To learn more, visit their official website and Facebook.