Skip to Content
Home / In the Media SpotLight / “Monster Crunch!”: A Board Game Inspired By Cereal 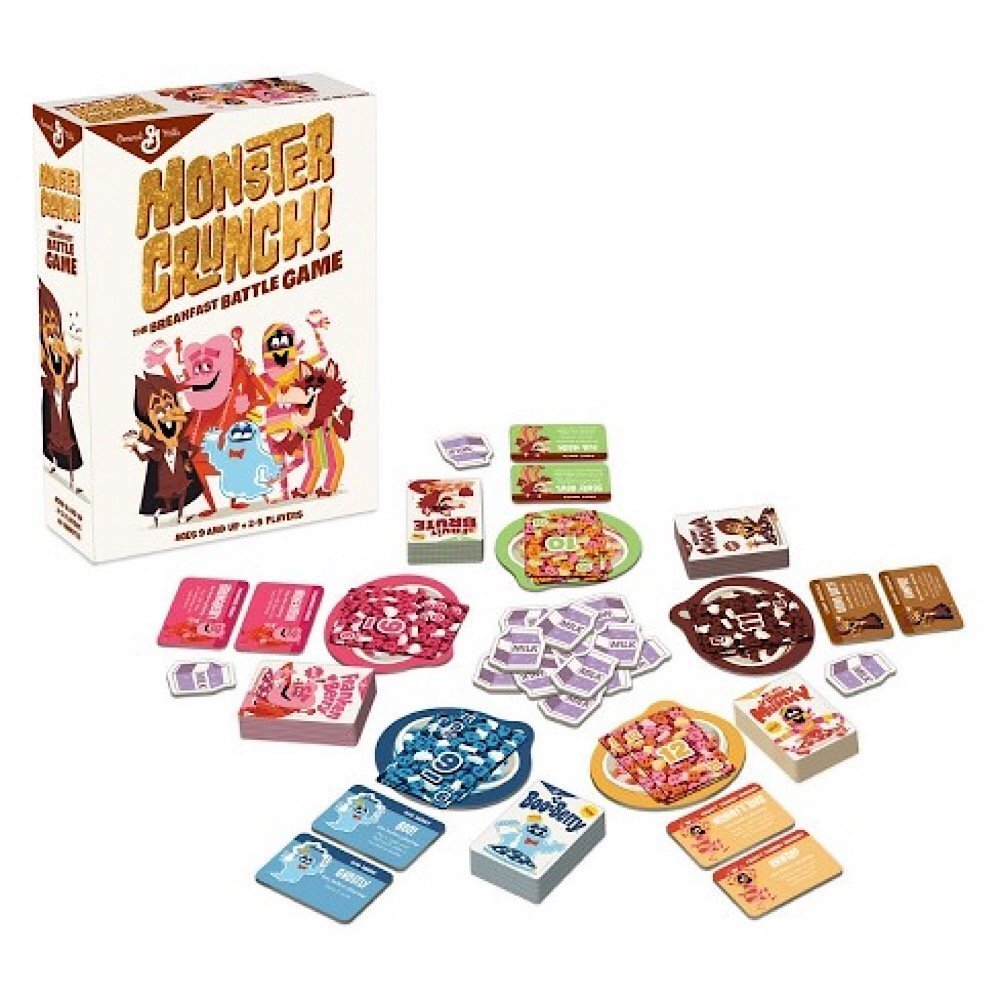 “Monster Crunch! The Breakfast Battle Game” is a new board game that makes it okay to play with your cereal. Starring the classic Monster Cereal Characters from General Mills, the game entices players to pick their favorite Monster Cereal character and compete to see who can “eat” the most cereal. In this fast-paced game of luck and strategy, players collect as many “cereal cards” in their “bowls” as they can. Each monster has special powers to give you an advantage and help you gobble up the most cereal. Use “milk tokens” to combine cereal cards and take bigger bites. The Monster Cereal character that munches the most wins the game!

This fun and colorful game features Boo Berry, Count Chocula, Fruit Brute, Fruity Yummy Mummy, and Franken Berry and it is ideal for family gameplay. It does not contain any questions and can easily be learned and played by young children.

Recently game designers from Forrest-Pruzan Creative discussed the creation of this game and their hopes for its future.

Q: “Monster Crunch” is a lot of fun, so how did you think up the style of gameplay which involves no trivia, questions, etc.?
Forrest-Pruzan Creative (FPC): For Monster Crunch, our main goal was to capture the nostalgia that goes along with the cereals we all loved as kids. With that in mind, we were inspired by a lot of the classic card games we remembered playing when we were younger–but wanted to update them with modern game mechanisms like unique special powers for each monster. We hope that Monster Crunch feels like a classic card game with a few really neat twists!
MM: Why did you decide to create a game about cereal and how long did it take to put together?
FPC: We’re always on the lookout for themes that will resonate with people, and who doesn’t love cereal?! For us, it provides an opportunity to introduce really fun games to folks that might not play them too often. A family might buy “Monster Crunch” because they like the characters, and then will be introduced to a new game that they really love. The game development process went smoothly. We developed the game over a few months. There were a lot of different things we tested with players of all ages before we arrived at the final gameplay.
MM: Why did you focus on the Monster Cereal characters from the General Mills line?
FPC: In going back and researching classic cereals, the General Mills Monster Cereal characters really struck us as having a fun narrative and personality. When you watch the old commercials, there is an overarching storyline that we thought was really fun and worth exploring.
MM: Of all the cereal flavors and characters, do you have any special favorites?
FPC: We were lucky enough to get a few boxes of the cereal here at the studio for “research”, and the team was split on our favorites. A lot of us liked combinations of the different flavors, and would recommend that you try your own mixes when you get the chance

MM: What experiences with fans have been most memorable to you and why?
FPC: Gen Con is one of the largest board game conventions in the world, this year at Gen Con we were giving out free boxes of Monster Cereal along with the release of the “Monster Crunch” game. Seeing folks light up when they discovered they could get the cereal in August was awesome, and so many of those people made it a point to come back to the booth and tell us they loved the game too. It was great to hear that, and it made for an especially memorable convention.
MM: Overall, what are your biggest goals for the future of the company and the “Monster Crunch” game?
FPC: We would love for families to enjoy the game and have it become something they play together for a long time. As we mentioned, the gameplay was inspired by the types of classic card games we played as kids, and so we hope that folks share the game with their children, their parents and their grandparents. It’s really something we designed for the whole family!
MM: Is there anything else that you would like to mention?
FPC: We can’t stress enough how amazing it is to mix the “Monster Crunch” cereals. Start with an equal mix of all of them, and then adjust to taste. Thank us later.

Moulin Roty: A French Brand Beloved in the USA