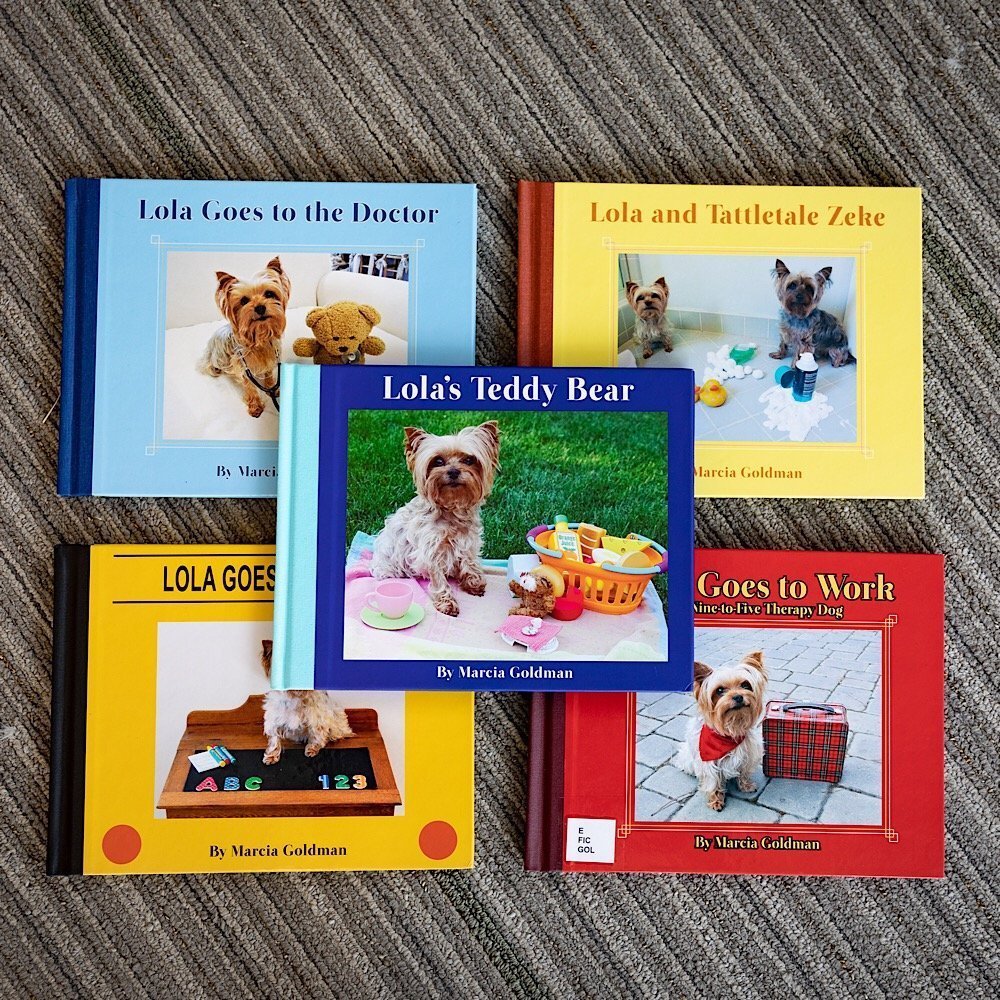 Lola is a therapy dog who lives in California with her loving owner, Marcia Goldman, and a number of beloved animal siblings.  A small and adorable Yorkshire terrier, Lola brings joy to the world via her job as a certified therapy dog who visits sick and elderly people in care facilities. In 2016, Lola’s endeavors became a source of amusement for children worldwide via a delightful series of stories. Written and photographed by Marcia, Lola’s adventures are published by Creston Books. To date, there are five books in the series:

Although these stories all center on a dog, their themes are ones that nearly all children can resonate with and that has helped drive the series’ success. Recently Marcia Goldman granted an exclusive interview where she discussed her experiences writing books, helping charities, and being Lola’s (and Zeke’s) loving mom.

Meagan Meehan (MM): How did you find Lola and what prompted you to get into the therapy animal field?

Marcia Goldman (MG): Our journey began while I was attending a cocktail party and people kept asking the woman that I was talking to how her puppies were. There was one female and one male. We were a “big” dog family and I knew my husband and children would think I was crazy if I brought home another dog, no less one that would likely be around five pounds! But when she called me several weeks later to say the female was mine, I rushed over to meet her and instantly fell in love. When I retired a few years later, I really didn’t know what lay ahead, but I was eager to slow down, and I figured I would know what I was supposed to do next when it presented itself. I knew about therapy dogs, but I didn’t know if only certain breeds were used or how one became trained and qualified. But I thought; I love my dog, I spent 30 years as a special education teacher, and if I combined the two, what better way to legitimize spending every day with my dog?

MM: Was the process of getting Lola certified as a therapy animal like?

MG: Therapy dogs do come in all sizes and breeds, and the most important characteristic is a friendly, patient, and gentle temperament. It doesn’t hurt for the companion human to have these same traits. It is equally important that the dog enjoy being petted and hugged and that they are comfortable around strangers and in new environments. The training requirements and tests vary depending on the program you are joining, but for us, the process to achieve therapy dog status was not quick nor easy. Lola had to go through two levels of obedience school, Canine Good Citizen training, and then pass the Canine Good Citizen test. Next came the behavior screening, which included getting her paws pinched, her tail gently tugged, and fingers poked around her eyes and mouth, all to show that she wouldn’t flinch, bark, or growl! The last step was a full physical for Lola, fingerprinting for me, and a series of shadowing visits at different programs to determine what type of environment fit Lola best. Not surprising to me, she flourished in every program, showing an uncanny instinct for those who needed her and desire to make people happy.

MM: What have been some of the most memorable reactions people have had to Lola?

MG: There are so many that I call her my tiny Hero. Here are two that exemplify the impact she makes where ever she goes:

One day after several months of visiting the autism classroom, the teacher handed me a letter written by one of the parents. I knew that her little boy had been quite terrified of Lola when we first started, but had gradually gotten closer and closer to the circle and recently even joined in and given Lola a treat. What I didn’t know was that this family had a typical son whose favorite outing was to visit the petting zoo. Their autistic son was too afraid of the animals and would have a temper tantrum every time they tried taking him; sadly, that meant that they were never able to visit the petting zoo as a family. Being unable to have family outings or go places together with your children, even the grocery store, is a significant hardship for families with a child on the spectrum. Not knowing about our weekly visits, they noticed that their son had begun coming home saying, “I pet Lola, I pet Lola.” Finally, the mother asked the teacher, “What is a Lola?” The teacher explained our weekly visits and the progress her son had made. On the following weekend, they decided to bravely give the petting zoo another try. Much to their surprise and delight, he loved it! It may seem like a small thing, but having the visits from Lola, learning to feed her a treat, and giving her a pat on the back, had meant that it was finally possible for this family to have an activity that they could all share together.

On one of our first visits to the Memory Care wing, I brought Lola close to a woman who didn’t seem to notice we were even there. After several minutes, I was about to step away when she looked up at Lola and began to talk to her. I couldn’t understand what she was saying, but Lola was attentive to her every word. As I stood holding Lola, I noticed tears in her caretaker’s eyes. Before I left, I asked her why she was teary and was told that this woman had not spoken in six weeks and that her daughter had been distraught over this new development. She then said, “This is a miracle and I can’t wait to call and tell her!”

MM: When did you decide to turn Lola’s experiences into a book series and how did you find Creston Books?

MG: One day, as we finished our session at the preschool, the teacher mentioned that the students never sat this quietly or for this long as they did when Lola visited. She asked if it was possible to add a story to the circle time routine. I said, of course, and then set out to try and find a book with a dog that in some way resembled Lola. This was proving to be quite difficult, and then I realized how much more impactful it would be for the children if they heard a story about the very dog that was sitting right in front of them! And so, I decided to create my own book!

The stories all have a simple and clear story line, with only one or two sentences per page, and focus on normal childhood concerns – and photographs rather than illustrations. Lola has a lovable face and an indomitable spirit that makes you want to cheer her on, so it seemed natural to let the stories be told in her voice. I had never written a story book, nor was I very good with a camera, but the children were my inspiration, and Lola was a willing participant (with a little help from doggie treats and string cheese).

MM: Are all the Lola stories based on things that have really happened to Lola?

MG: They are except perhaps “Lola and Tattletale Zeke.” More importantly, they are based on things that young children experience and Lola gives them a voice and hopefully a positive and empowering way to deal with these events in their lives.

MM: You have five books in the series now, what other titles are you planning to add? Can you give any hints as to their plots?

MG: The next book is about Lola going to the hospital. Even though we have “Lola Goes To The Doctor,” there seemed to be a lack of stories for young children about being in the hospital. Whether it is the child, their sibling, parent or grandparent, I wanted to make the experience less frightening.

MM: Lola has an adorable brother, Zeke. Is he the only other pet you share your life with and might Zeke be making an appearance in future books too?

MG: Lola lives with three other pets, Zeke, Isabel and Tilly. Isabel is a black cat who also makes an appearance in “Lola and Tattletale Zeke” and Tilly who is a 4lb Yorkie and also a therapy dog. Till will make an appearance in the next book!

MM: How do you hope your book series continues to evolve over the next five years?

MG: In addition to the next book, several of the books are now being done as board books. We realized the appeal is for a much younger audience than we had thought and so “Lola Goes To Work” came out as a board book last Spring.

PJ Library Introduces Podcast “Have I Got a Story for You!”

Author Spotlight: Namita Mehra On Her Book ‘Superfoods For Superheroes’