Skip to Content
Home / In the Media SpotLight / La Luna: Interview with Andres 123 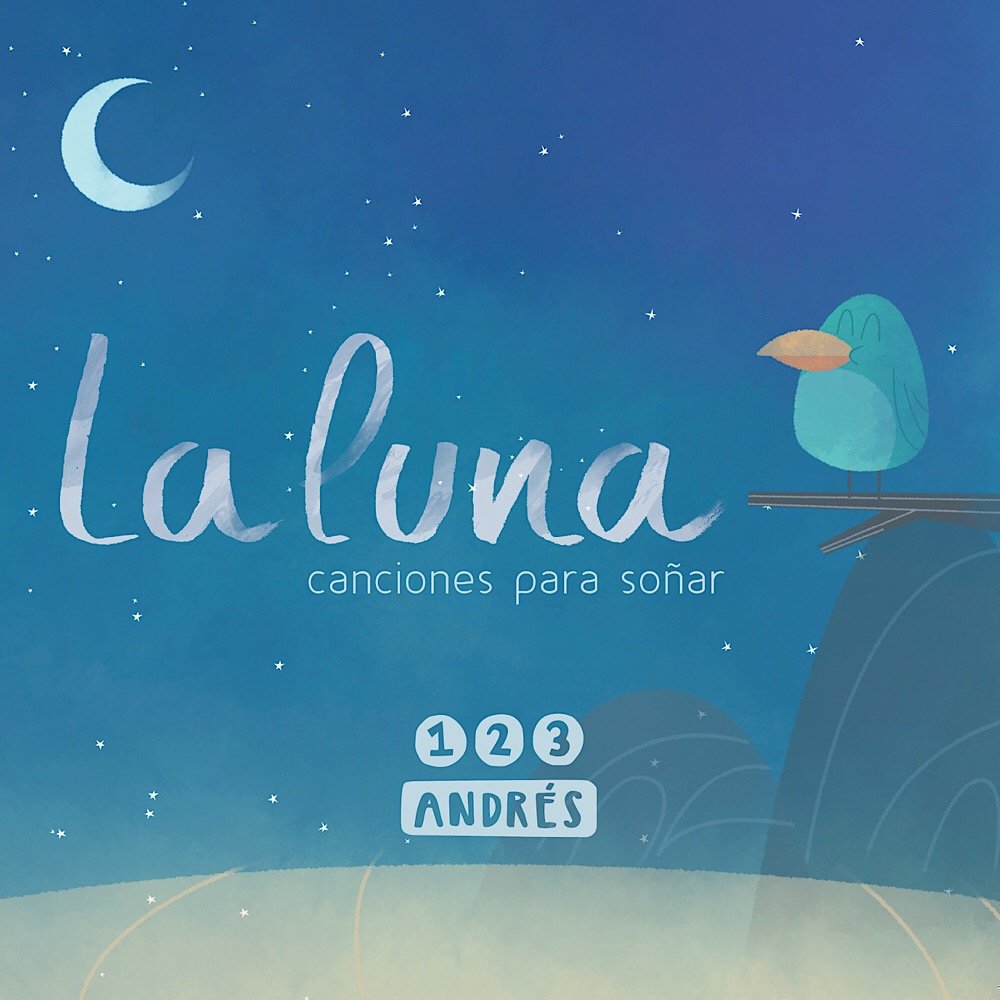 “La Luna” is the latest album from Andres 123. Latin GRAMMY winner Andrés and his wife Christina spend most of their time in the United States, but Andrés’ ties to South America carry them across the continent. Their album “La Luna” was produced in Argentina and Mexico, and the list of top-tier guests hail from several countries. The special surprise that closes the album is an appearance by Little Miss Ann (a noted Chicago based kindie artist) with a tender song in English and Spanish called “Fly, Shine, Soar.” You can watch the recently released animated music video, featuring an Andean arrangement of the classic “El elefante” on the 123 Andrés YouTube channel.

The album was released in mid-April and already critics, DJs, and fans are raving about this virtual tour of the softer sounds of various Latin American musical traditions. Moreover, SiriusXM Kids Place Live listeners may now hear the songs on rotation during their nightly “Dreamcatchers” lullaby programming.

Andres 123 recently discussed this new album and more via an exclusive interview.

Meagan Meehan (MM): How did you initially get interested in kid’s music and what makes your sound so unique?

Andrés: I started in music as a kid, in Bogotá, Colombia. One day when I was six, my dad was walking by a community center and heard kids’ voices singing. It turned out to be a kids’ music group, so he signed me and my brother up. I continued studying music, specifically classical clarinet, until I got a Doctorate in Clarinet Performance!

But while I was studying, I was also playing in other bands lots of different styles of music. One day I was hired to sub in for a sax player in a children’s performer’s band – Dino O’Dell, in Kansas City. I had so much fun that I continued playing in Dino’s band and learning from him. After graduating, I decided I wanted to spend my career performing for kids and families, and that I could offer a show in Spanish and English that reflects the day-to-day life for so many kiddos growing up bicultural in the US, so I decided to create my own band!

MM: What inspired “La Luna” and what was the process of writing the beat and lyrics like?

Andrés: My wife, Christina, who is now the other half of 123 Andrés, told me that as a little girl she had two cassette tapes of lullabies that she treasured. She could even sing the songs from memory, and it made me realize the power of lullabies. Then I connected with Leandro Álvarez, one of the producers, who is based in Argentina, and started listening to his work. We loved how well he knew the genres of this region of the world, the Andes, and thought that a lullaby album would be a great opportunity to collaborate.

The writing process was a lot of fun. One day, a mom wrote to me on social media about her little boy, named Benjamín. She told me that he loved to pretend he was a pirate, and he also loved to make up words. Her stories inspired me to write the song Benjamín, except that in the song Benjamín finds real, complex words. Our hope is that kids will ask adults, “What does ____ mean?” and that will start conversations and introduce new words into their vocabulary.

MM: Typically, how long does it take you to record a song and how do you prepare for that process?

Andrés: It depends! I will start humming a melody and creating the song, and I will record it on my phone. I step away for a few days and listen to the recordings later and think about whether I am satisfied or need to tweak. When I have something I’m ready to share I will send the recording to fellow musicians or producers, and we’ll start creating the song.

On this album, Un Elefante took the longest. It is a traditional song in Spanish and many families know it. I wanted to make our version playful and original, but it took us a while to figure out what sound we wanted. Finally, Leandro introduced the quena and siku flutes and we knew that we had it!

MM: How do you get your music recognized and build your fan following?

Andrés: Christina and I love performing and we have lots of concerts in the Washington DC area – which is home for us – as well as cities across the US! In summer of 2018, we will be in Tulsa, Grand Rapids, Greater Chicago, Portland, Oregon, and more! We meet many new families that way. We were very honored that our first album was nominated for the Latin Grammy, and our second album, Arriba Abajo, won the Latin Grammy! It feels very rewarding to be recognized and gives us more energy to continue making music.

MM: You have many concerts coming up, so what can audiences expect from your shows?

Andrés: Families should expect an interactive, high-energy show! Whether it’s just the two of us, or a full-band concert, we make it a family party. Everyone – regardless of age – is invited to stand up to dance and jump. Our concerts are also an opportunity for kids and families to learn or practice Spanish and celebrate bilingualism and multiculturalism. Whether you are fluent in Spanish or speak no Spanish at all, we hope that each member of the family leaves having learned something and having laughed or smiled at some aspect of the concert.

MM: Do you enjoy touring and which locations are the most memorable and/or best attended?

Andrés: Greater Washington, DC is home for us so we always love performing here in DC, Maryland and Virginia. We have also had the awesome opportunities of performing in Latin America, in Bogotá, Colombia, Panamá City, Panamá, and San Juan, Puerto Rico.

MM: What are the challenges of being a professional musical artist?

Andrés: Christina and I love our jobs as full-time musicians! We often have the feeling we wish we had more hours in a day, since there are so many projects we have in mind. It can be tough to carve out several hours to focus on songwriting, or to focus on a big project. But overall, our job is so meaningful and rewarding – we love it!

MM: You have a YouTube channel, so what do you strive for in your videos?

Andrés: In our videos, as with our songs, we strive for them to be fun and educational at the same time. We also have two versions of most of our videos (Spanish and English), so that kids can watch them in both languages. We love that our video, ¡Salta, Salta! has kids and their families in it, jumping together, showing how fun it is to be outdoors and active together.

MM: Overall, how much has social media helped you connect with fans?

Andrés: Social media does help us connect with new fans. For example, recently we were in California and at one concert, a dad told us that one of their friends, who lives in another city, attended one of our concerts and posted about how much fun they had. A few days later when he saw that we were coming to California he made sure to check out our concert schedule!

MM: Your music has a multicultural edge, so how does that translate in various communities and nations?

Andrés: Recently, we performed at a school where the majority of students had parents who were immigrants, or were immigrants themselves, from all parts of the world. At the end of the concert, as the students were leaving the room, we overheard several kids asking each other things like, “How do say ‘friend’ in Amharic?” and “What language do you speak in Ivory Coast?” That blew us away, because that’s such a central message of our music and concert. In reality, wherever we are performing, whether or not it’s an “international” or diverse community, we find that kids of all ages do believe that we can all be friends regardless of what language we speak and are enthusiastic about learning about other countries and cultures.

Andrés: We are so excited about the next year! We are already working on our next album, which really centers around movement and physical activity as a family. We will be releasing singles starting this summer, and lots of other projects in the works!

To learn more, visit the official website of 123 Andres and he can be followed on Twitter and Instagram via @123conandres and tagged via hashtag #FlyShineSoar or #Laluna. To watch the music video of the song “Fly Shine Soar,” see here.