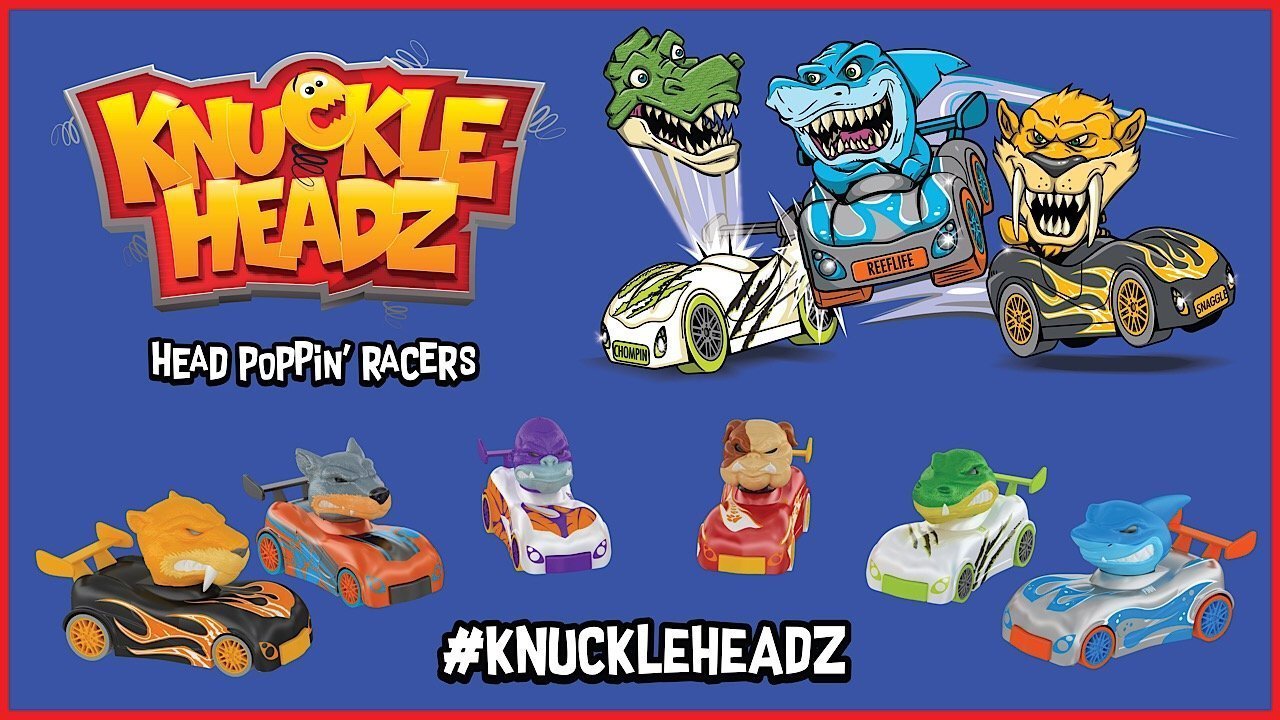 Knuckle-Headz is a new brand of toy cars by the SD Toyz company that makes for a unique play pattern. SD Toyz is a family owned and operated brand that has been manufacturing craft kits and toys in Southern California since 1987. The tight knit Koehl family of five work together to produce the most innovative and fun toys imaginable.

Stephen, the youngest of the three siblings is the president of SD Toyz. Peter, the eldest sibling is the VP in charge of production and marketing. Corny, the sister in the middle, works on publicity and social media. Pete, the father, oversees all business facets of the company.  And last, but far from least, Emmy is the essential glue that holds it all together. Every toy and craft they invent and create has this promise at its core: their hands-on crafts are the perfect family fun designed to foster imagination, conversation and creativity.  Our Knuckle-Headz, remote control cars and race tracks promote focus, fun and good old healthy competition.

Education and entertainment are SD Toys chief product design motivations, with the explicit intention of igniting the imaginations of specialty toy-lovers, kids and their parents from around the globe. They pride themselves on one-of-a-kind educational crafts, unique twists on classic toys, exciting packaging…all made in the U.S.A. They have built upon established licenses such as Smithsonian, Ford, and General Motors to enhance our own educational and racing brands.

Corny Koehl recently discussed her family’s business and more via an exclusive interview.

Meagan Meehan (MM): When was SD Toys started and why was that specific name chosen?

Corny Koehl (CK): Based in Southern California, SD Toyz is a family company that has been innovating for over three decades. Originally, our business was producing museum quality fossil replicas. We would make molds of the original fossils, cast them, and reproduce stunning replicas.  This passion led us into the exciting world of creating hands-on crafts for kids, in which they could cast their own fossils, and explore the wonderful world of dinosaurs. As our craft lines became more robust, we began to appreciate the public appetite for high quality, Smart & Distinctive toys and crafts. And as fulfilling that mission became our core competency, we adopted the name SD Toyz.

MM: Right now, many toys do you offer? What are your age ranges?

CK: We sell over 175 different items, and our principal product lines include: Tracer Racers (RC cars and light-up tracks); Max Flex R/C (cars and flexible light-up tracks); Light-up Marble Racers (gravity, pull-back & R/C); Body Shop Kits; EyeWitness (Craft) Kits, Smithsonian Kits & Puzzles, Perfect Craft Kits. We have toys for kids ranging 3 and up to 8 and up. Our crafts, with an emphasis on family fun, run the gamut in terms of target age. We have found that moms with a penchant for crafting enjoy our Perfect Craft kits as much as their kids do!

CK: There is endless wisdom and satisfaction in trying to see the world through the eyes of a child. It is that lens through which we design all of our products. Is it fun? Does it make me laugh? What can I learn? Is it fun? How is this toy or that craft distinguishable from all the other products out there? Is it fun?! And then, of course, once we’ve conceived of a new toy or craft, we test the concept out on kids before we go into mass production. As much as we try to see through their eyes, it’s the kids in the end who know what they want.

MM: What are some of your most unusual products? Which are most popular?

CK: We carry a line of Smithsonian motorized 3-D puzzles. Assembling jigsaw puzzles delivers wonderful satisfaction, is great for the mind and promotes dexterity, but imagine the satisfaction of putting together a 3-dimensional puzzle, and seeing it come to life right before your eyes. We have received such amazing feedback on our line of Perfect Craft kits. It’s more than merely decorating a prefab item, it is mixing the casting material, pouring it in the mold, creating something from nothing – we have a stepping stone kit, flower and herb kits, picture frame kit, alphabet kit and more. Earlier this year we did a Perfect Craft Stepping stone promotion, and we were blown away at how imaginative the kids were creating their one-of-a-kind pieces of art. Our Light-Up Marble Racers have been so successful, based on kid-customer feedback, they have evolved from the classic marble gravity racers to the powerful pull-back engine racers, to the brand-new remote-control racers with rear-wheel drive that allows kids to make hairpin, drifting turns and maneuvers.

MM: You recently came up with the Knuckle-Headz car series. How is it unique from other car series and who thought it up?

CK: My brothers, Peter and Stephen, actually came up with the concept of Knuckle-Headz when they inadvertently bumped their golf cart into another out on the course. It occurred to them how much fun if they were to create kid cars the goal of which was to crash into one another. It’s true, there are so many toy car lines up and down the aisles of your local Target, but we thought, “what if we differentiated our cars with funny character heads that pop off when they crash into one another?” At SD Toyz, we love the idea of healthy competition, and this concept plays right into that. How high can your head pop? Who will lose their head first? How far can your car travel and still lose its head? Thus, Finn the shark, Fang the saber tooth cat, Francis the gorilla, Snarl the wolf, Stubs the bulldog and Rex the T-Rex were born! It really is mind-blowing fun!

MM: To date, what has been the most rewarding part of working with SD Toys?

CK: A family that plays together, stays together. Our family is a testament to that statement, and the idea of fostering that ideal with other families is a gift that keeps on giving. Really, who doesn’t love toys? To have the wherewithal to invent new ones is a privilege that never gets old.

CK: In a competitive market we have somehow managed to break through, and put the toy company on a very positive trajectory. If for the next ten years, we could maintain that trajectory, continue to innovate and make more and more kids smile, we will be just where we want to be!

CK: As I mentioned, there is no doubt that the toy industry is highly competitive.

Google “Toy Fair 2019”, to get an idea of the fraction of new toys that were launched this year alone. That said, if you have an awesome idea for a toy or game, this is probably the best time ever to make that dream a reality. If you’re really passionate, create a low-cost prototype and test the waters of interest on Etsy or a similar platform. Crowdfunding is another way to see if your idea has legs to generate interest/investments in your vision. And, finally, don’t let the naysayers say you can’t. Naysayers are a dime a dozen. You are an innovator!

MM: Are there any upcoming events that you would like to mention?

CK: WIN ALL SIX KNUCKLE-HEADZ! We have finally launched a Youtube channel to share how-to videos of our various crafts and toys. The names of the first 100 individuals to subscribe to our channel at www.tinyurl.com/sdtoyz will be placed in a hat, and the winner will receive the entire line of our new Knuckle-Headz Head Poppin’ Racers!

“Mythical Sylme”: Review of a New Series of Slimes

Kiddopia: An Edutainment App for the iGeneration