How Neil Patel changed the way I saw blogging!

Child Behavior: 7 surprising factors that could make it weird!

Raising Leaders All Along The Way: Meet Kiran Bir Sethi 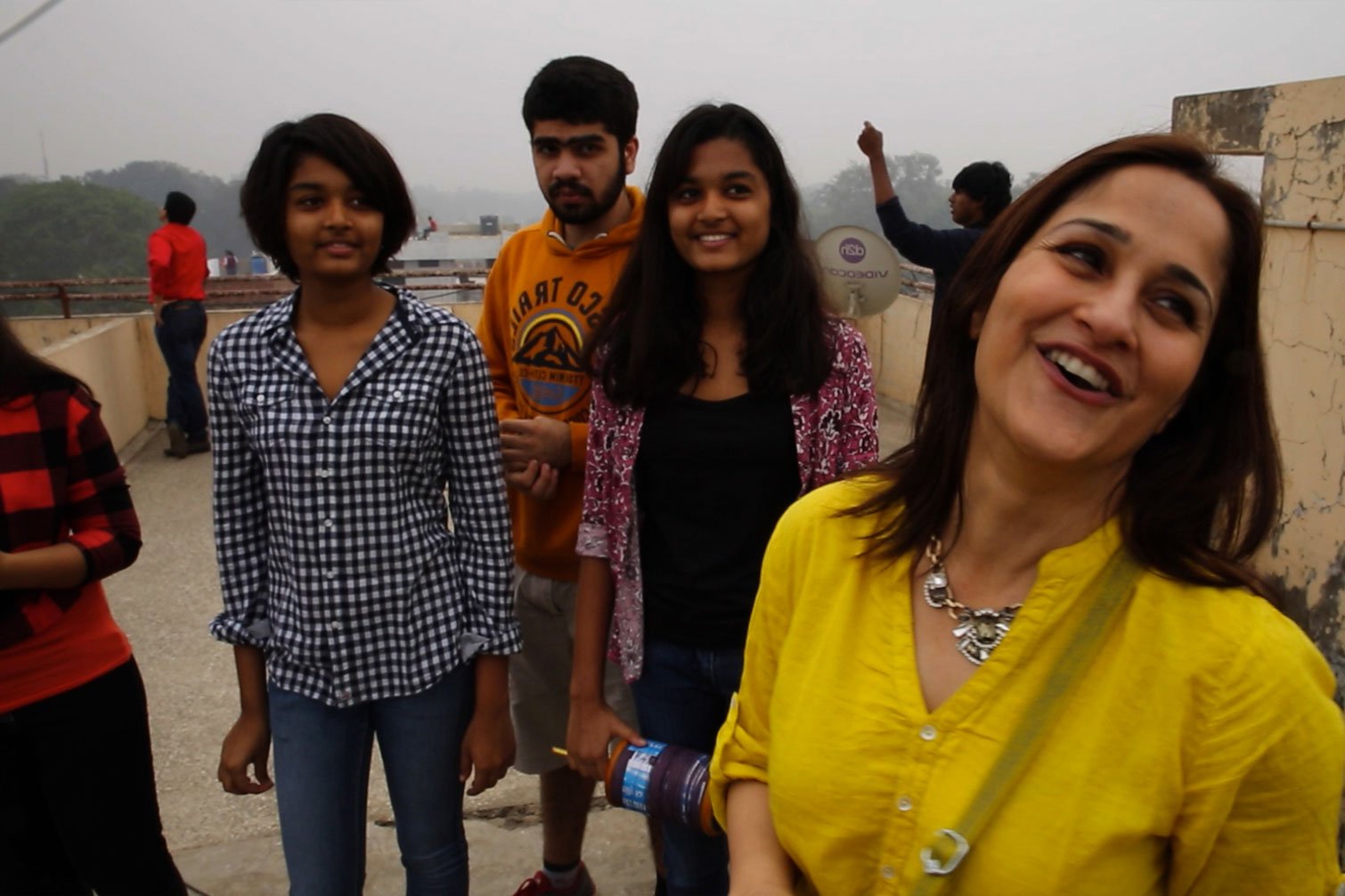 For Kiran Bir Sethi, it all started when she saw that her son was unhappy in his school.  Appalled at the kind of treatment the school passed off for ‘education’- this spunky woman just decided to do it herself!

That’s when the RiverSide school was born in Ahmedabad.

Along the way- Kiran Bir Sethi has inspired not only thousands of children, but also thousands of teachers. Her unique ‘Design for Change‘ school challenge was initiated in 2009 and  has  already been adopted in 35 countries raising leaders. Her curriculum is unique and much sought-after; because her students take social issues in their own hands. Her children can rival India’s top schools in academic performance. They can also do another incredible thing- they can look around them, feel a problem, come out with a solution and act on it!

Her curriculum focuses on student Social and Emotional intelligence for children- considered among the top factors for raising leaders.  In her own words, she once had her children roll incense sticks for several hours at a time to truly understand what child labour entails. After that, the children were out on the streets advocating abolishment of child labour themselves. That’s raising leaders for you!

Kiran was a Top 10 finalist for the Global Teacher Prize by Varkey Foundation.  Kiran became an Ashoka Fellow in 2008. She was  honoured with the Patricia Blunt Koldyke Fellowship 2013 for Social Entrepreneurship. Her ‘Design for Change’ initiatives won the INDEX – Design to Improve Life Award in 2011 and The Rockefeller Foundation Youth Innovation Award in 2012.  Her aProCh won the Ashoka American Express ‘Serve2Gether’ Consultancy Award in 2013. She has also been awarded the Asia Game Changers Award for Impact Change and Youth Volunteerism.  Her TED Talk(embedded) has inspired thousands of others to take charge of change and raise leaders.

When I sought an interview with her, she was gracious enough to respond that she can take the interview after a good two months. I got in touch with her again- and we had a quick chat over Skype.

Boy, her energy flowed even across the screen!

Hello, Kiran! We are thrilled to have you on Kidskintha. You started the now iconic Riverside school way back in 2001. Can you please tell us a little about what prompted you to start it?

Thank you for having me on Kidskintha!

The beginnings of this school really had to do with what my son was going through in his school. Today’s education system does everything to remove the last vestige of identity from a child’s life. It comes down to practices like calling out roll numbers, instead of names! It just started with a decision to tak emy son off school, because I thought  I could do a better job. It was really a very personal story, driven by a mother’s angst for her child’s well-being.

From a school that started with 24 kids, the Riverside School curriculum is now something to be reckoned with. How did you find the strength to convince parents to give it a try in the beginning?

To be honest, I think the children who came in the very beginning came because they didn’t get into any other school(laughs). It was more for reasons like- ‘this is close to home’ or ‘let’s just have him here for a couple of years till he gets into a better school”. They all stayed because they saw and liked what we(and they) were doing!

Your curriculum places special emphasis on emotional development and community involvement among children, more like developing little leaders with ripple effects. I think that is an amazing thing. What challenges did you face while designing the curriculum, given that you are from a background other than education?

I would say it was so much easier for me because I did not come from an Education background. All I did was to apply the design process to design a curriculum- much like you would apply it to designing a chair or a service- and it so enriched the whole process. I took the same human-centric approach to designing a child’s learning curriculum and that’s what made it resonate with children!

Your ‘Design for Change’ program has been a game changer and has caught up like wildfire all over the world. Not to mention that it is now followed in 35 countries. Kudos to you on that and your immensely inspiring TED Talk! What, according to you made it tick? What were your challenges?

I think people resonated with it because they all knew this is what it should be, but didn’t know how to do it! The fact that ‘Design For Change‘ Program offered a very simple way to do it with no rules or prerequisites; helped people overcome the barrier. It also helped that it was and still is a completely free program.

If a school wants to get started with the ‘Design For Change’ program, what are the prerequisites?

The only pre-requisite is a mindset that ‘Children Can’.

Just head over to Design for Change and download the material( it’s all free!)

Your ‘aProCh’ (a Protagonist in every Child) program, emphasizes on the participation of every child in city-building and raising leaders. How frequently are these programs carried out? What are the typical activities under this program.

‘aProCh’ has about 5 initiatives right now. It started with the idea of taking public spaces in the city and converting them into spaces for childhood. It started with the most obvious public spaces like the parks and streets, and then it moved on to corporates and  other people opening their hearts and doors- like restaurants, cinema halls, malls, etc. It started by saying that what’s public should also be for children. Otherwise, all services for children are just transactional. We wanted to level the field by saying that all services offered to a citizen must also be offered to the child-free of cost!

So, now we have Street Smart, which happens six times a year when traffic on the street closes down to welcome children. The message is – ‘the city cares for its youngest protagonist’.  And then we have ‘City on Cycles’ – where cycles spaces are promoted to reclaim spaces for children. Then, we have ‘Parents Of The Park‘ where about 14 parks have been brought alive for children and it happens every Sunday. With the growing number of partners in 8 cities for this initiative, I see it only growing bigger and better.

Have you seen any cases where children(or parents) have not received the spirit of the program very well? Mindset is definitely a major challenge.

As happens for every major change, there is resistance and acceptance. But, that’s okay. We will reach a tipping point. I see that tipping point is slowly happening.  With the kind of partners that we are getting- recently, we had Amitabh Bachchan talking about Design for change- we have powerful advocacies and amplifiers for such a terrific movement.Every movement typically takes about 10 years to get there. We have been here for 7 years, so it will take another 3 years to become part of the ethos. You know, right now, nobody has to tell you how to celebrate Diwali. For something to come that naturally, it takes a lot of time.

Talking about challenges, one of things that we discuss here at Kidskintha is about balancing the tight rope. Managing time between work and home is a mountain of a challenge-everyday. Can you talk a little about how you do it- manage to do it all and still avoid guilt-trips?

I don’t see it as something I have to ‘manage’ it. It is all life for me. I don’t make choices that will make me feel that I am making compromises. Everything I do is because I want to do it. If I have to go home and take care of something, I dont need permission. If I have to work, I don’t need permission either. If you look at something as your choice, I think it all changes.

What are your best timesaving /productivity hacks?

I would say my best productivity hack is being surrounded by a team of great people. I invest a lot of time and care in getting the right people. Delegation is the key here.

I wake up around 6:30 and take in a good walk. I go into school and I am there till it needs me. Sometimes, its 4 Pm, sometimes 8 PM and sometimes till the next morning.

Which apps/software do you use to organize your day? Your favorite to-do list manager?

I don’t use many apps, but I do set up reminders on my phone for very important things. On top of it, if something is really, really important- I tell two other people to remind me!

What personal habit do you think keeps you afloat amidst all the stress? What one habit would you recommend other professionals cultivate?

It’s not so much a habit as it is a mindset – optimism. I believe that if today was better than yesterday – it’s a good story. I think it’s also important to know the difference between rest and renewal. Sleep is not necessarily going to renew you. You can renew yourself by having a good laugh, surrounding yourself with good people, family and friends. Also, practising spirituality also helps where you develop great perspectives and gratitude.

What’s the best advice you have received?

The best advice I have received is that you don’t have to do a whole gamut of things. You can do just one, and do it well- and it will have impact.

If you had the power to change just one thing in a school today, what would it be?

If you believe that children are the future of the world, make that future now!

As somebody who has walked the path, what’s your advice to other professional, especially women just starting out.

I don’t think this is a gender thing- its only a competency thing. I don’t think, by virtue of your gender or your demographics, you should get any special privileges. As for the guilt mindset, the conflict will go away as you become more and more confident that your choices are not governed by seeking approval- they are governed by seeking meaning.

That’s such a wonderful message right there. Thank you! If there’s one thing you could change about women, what would it be?

I would advise them to stop thinking of themselves as women. To put themselves in neither an exalted position nor a deprived position. If you want something, just do it!

A few words on what you like about Kidskintha the most.

I like the themes that get discussed on the site – and think this is a one stop shop for parental concerns.

Baking from the Soul for Soul Baker- Meet Meeta Walavalkar

Making a ‘Maker’ out of Every Child: Meet Bethany Koby

The Woman Who Did The ‘Fit’ting Thing: Meet Pooja Rao

A Drop Of Fragrance And a Whiff Of Attitude: Meet Ahalya Matthan

Devishobha Chandramouli is the founder of Kidskintha- a site dedicated to creating happy children. She believes that growing up well and happy is a function of growing up with well-informed adults. This site aims to deliver research-grounded and bite-sized pieces of information on two important facets of a child’s life- parenting and education. You can find her voice on the Huffington Post, Addicted2Success, TinyBuddha, Citizen Matters , Nectar and Lies About Parenting.