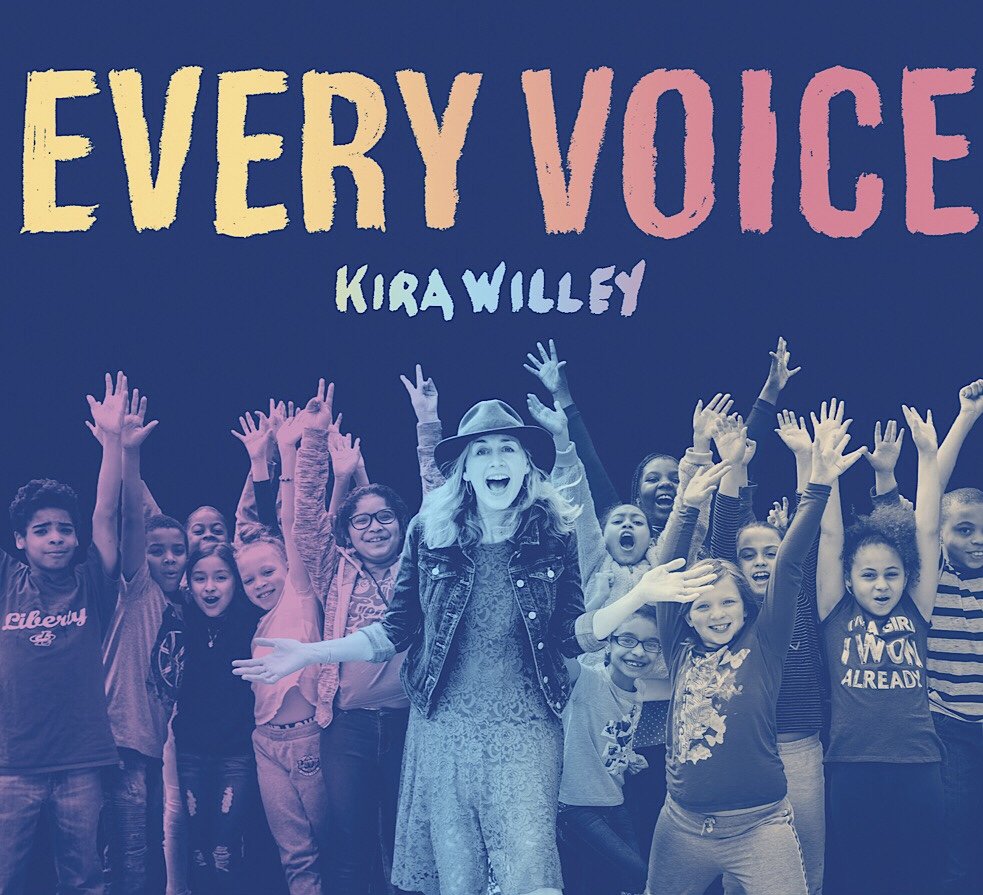 Award-winning songwriter, author and mindfulness expert Kira Willey just released her most expansive recording yet, “Every Voice.” It is her fifth album of original songs offers empowering, community-minded encouragement for dreamers and future leaders, in heart-pumping tunes packed with catchy, sing-along choruses.

From the first tune, “Brand New Day,” an up-tempo power pop song, the momentum and positivity grow from track to track. Willey is known for her mindful lyrics, and these new songs offer listeners a variety of ways to reset their intentions with each new day. Already, the album is receiving advance praise, including from Kenny Curtis of SiriusXM Satellite Radio. Emmy-winning animator Maciek Albrecht (HBO, Sesame Street, Scholastic) has created videos for “The Leader in Me,” and “Community,” (to be released in June) and teen group Real Girls has made a video for the first single.

Kira Willey brings music, yoga-based movement, and mindfulness, to kids in various ways. She created Rockin’ Yoga school programs and concerts, with her music and books, and by working directly with teachers and parents. Her albums have all earned Parents’ Choice Awards and national acclaim. Her hit song “Colors” was chosen for a worldwide ad campaign by Dell Computers, and is currently featured in a Canadian tourism ad (primetime TV and on Air Canada). Willey’s “Backseat Yoga Breaks” can be heard on SiriusXM Kids Place Live, and she’s the creator of two yoga-for-kids programs which air on PBS TV affiliates nationwide. Willey has made guest appearances on Laurie Berkner’s best-selling songs, including “Swing Me” and “Open Your Heart” (which is also a music video).The two artists have collaborated to create “Music You Can Move To” interstitial programming for SiriusXM Satellite Radio. A recognized children’s yoga and mindfulness expert, Willey is a frequent presenter and speaker at conferences; her TEDx talk “Bite-Sized Mindfulness,” can be viewed online. Organic Life magazine recently featured her work in public schools. In December 2017 Willey published her children’s mindfulness book, Breathe Like a Bear (Penguin Random House).

The mom of three lives in Bethlehem, Pennsylvania, and also founded and leads frequent “Pop-Up Choir” events for grownups. Recently, Kira granted an exclusive interview where she discussed these successes and more.

Kira Willey (KW): I’ve been a musician all of my life; I started playing violin when I was five—I can barely remember a time before I played music! It’s just always been a part of my life. All through school, I played in orchestras and ensembles and sang in the chorus. There are lots of musicians in my family, too. I’ve written songs from the time I was very young, but it wasn’t until I started performing them (for people I wasn’t related to!) that I came to figure out what felt right. Putting myself out there and singing the songs for live audiences led me to my unique sound.

MM: Your latest album is due out in June, so what are some of the songs on it and what inspired them?

KW: “Real Girl” might be my favorite song on this record. It’s all about GIRL POWER but in a very real, everyday way—the power that comes from truly being yourself, and not feeling like you have to change or look a certain way to fit into a box created by your peers or social media. Plus, it’s a real rocker, brilliantly produced by Zak Rizvi, which is super fun.

One of my other faves is “The Leader in Me” which was inspired by a leadership program that’s in place at some elementary schools where I’ve performed. This program empowers kids to take initiative to make positive change and to be leaders in their communities, whether that means their classroom or their neighborhood, and to behave that way even when no one’s watching. Empowerment for kids is a huge theme in this album as a whole.

I also love “Hello Hope” which is a simple piano and vocal song that addresses head-on the fact that even young kids regularly hear about scary things in the world. I’ve worked with lots of children who’ve been through very tough experiences, and one thing I know for sure is that we can’t not talk about it. I hope this song can be a reminder that when we reach out and take care of each other, we can all remain positive and hopeful, no matter what’s going on.

KW: I almost always write the music first. Melodies are always popping into my head! If one sticks and I really like it, I try to match it with a lyrical idea to start a song. Occasionally I’ll think of a good title and start there, but usually the music comes first for me.

MM: What inspired your latest album and how is it different from others?

KW: This record was inspired by working with all kinds of kids in all kinds of circumstances and feeling strongly that it’s extremely important for all of them to consistently hear positive messages of optimism, empowerment, and compassion. These songs are a bit more pop-oriented and radio-friendly than my previous releases; many of the songs have big, singalong choruses and driving, dance-y beats—I hope families will rock out to it together!

MM: You host workshops to get kids exercising, so what was it like to set up such programs implemented and what can people expect to experience at these live events?

KW: Rockin’ Yoga concerts and school programs are totally interactive. I get everyone (and I mean everyone—teachers, grandparents, you name it) up and dancing during the songs, and then add in musical Yoga Breaks in between. Everyone gets up and participates in simple, fun yoga and mindfulness exercises!

MM: You have also written children’s books and worked on shows, so what was it like to engage that sort of media?

KW: It’s been really fun to move into different mediums while still working with children. I feel very fortunate to have different vehicles to deliver my message—that music, movement and mindfulness are incredibly beneficial (and of course fun) for kids.

MM: You’re a big believer in yoga, so how does that impact your creatively?

KW: Yoga can be more than just physical exercise. I think the values associated with the philosophy of yoga are ones we can all agree on: take good care of yourself, don’t harm anyone else, help others—and these inform the messages I try to get across to children in my work.

MM: You have won many accolades including the prestigious Parents’ Choice Awards, so what was it like to win/earn these honors?

KW: It’s an honor to be recognized by the music industry, and definitely gives a certain sense of credibility—when I first won a Parents’ Choice Gold award I thought “Ok, I’m legit!” But, honestly, it’s the feedback from fans that really lets me know I’ve put out something good.

MM: You also give speeches at TEDX so how did you get into that and would you recommend it to other creators?

KW: Speaking at TEDx is something anyone can apply for. It’s quite a rigorous process: the applicant pool is narrowed down for months, with repeated auditions and interviews until the final speakers are chosen. It was an incredibly valuable experience because it made me really, really think about what my message is. When you’re passionate about something like I am, you could talk for hours about it! The TEDx process demands that you to cull it down to just ONE idea, and that whatever else you say truly supports that idea. You have to get rid of the fluff and distill your message down to its essence. I’d absolutely recommend it to other creators.

KW: I’d like to help as many schools as possible incorporate music, movement and mindfulness into every school day!

Visit Kirawilley.com for upcoming performances and other news. She can also be found on Facebook. To see the premiere of her music video, click here. To watch her recent TedX talk, see here.

“Mythical Sylme”: Review of a New Series of Slimes