Skip to Content
Home / In the Media SpotLight / Kiddopia: An Edutainment App for the iGeneration 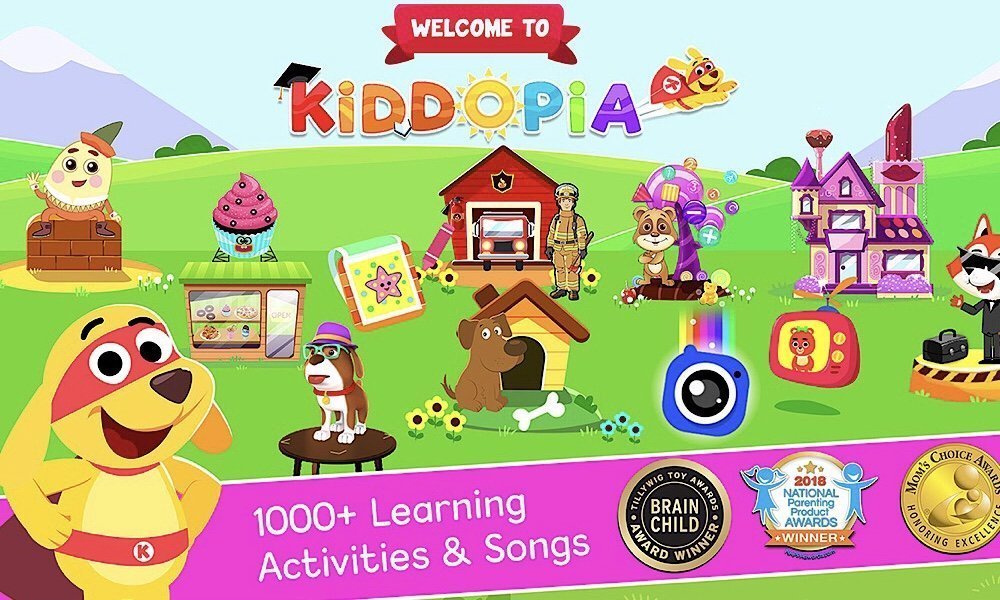 Kiddopia is an edutainment app that makes learning fun for small children. While a typical one-year-old knows about 70 words, an eighteen-month-old can learn one new word every two waking hours! Noting how fast little ones can absorb knowledge, Kiddopia has released a number of award-winning games filled with adventures that teach through songs, puzzles and life lessons.

Pre-readers can enjoy Kiddopia’s many portals including its newest one – Math Whiz. Now 2-year-olds won’t need to rely on counting their fingers and toes! Just follow along the storyline and play! If they make a mistake, it’s actually a lesson. Kiddopia offers all the basic concepts of general knowledge in a playful, intuitive way on a small screen. The over-a-dozen Apps in this creative catalog require iOS 9.3 or later. Apps are compatible with iPhone, iPad, and iPod touch. A free trial is offered at the Apple, Google and Amazon stores. At the iTunes Store, Kiddopia is earning a 4.6 of the 5-star rating culled from 1,300 votes!

How does Kiddopia do it? Through intuitive games, songs and directions that kids adore. Imagine being asked to bake then decorate cupcakes and donuts or cook then design pastas. When tots become cooks or take on other role-playing games, the experiences entertain and teach. After naptime, spend an hour being an astronaut, where you need to make your own spaceship, rescue aliens and explore space! The next day you are asked to rescue a sick aquatic animal by playing a Fish Doctor! Tomorrow you become the Handyman and fix broken things around the house.Meanwhile, parents will be delighted by their children’s newfound confidence and expanded vocabulary.

Recently tech-savvy founders Anupam and Anshu Dhanuka (a husband-and-wife creative team) discussed their creation which they hope will instill globally relevant educational content for preschool and kindergarten kids and how they took the initiative in conceptualizing, building and marketing the initial few apps of the company.

Meagan Meehan (MM): How did you initially get interested in Entertainment-Education and how did that turn into developing Kiddopia and the many apps-within-apps it contains?

Anupam: The iPad came out the year our daughter turned one and we realized right away that touchscreen devices have great potential for early childhood education. We wanted to create games that our daughter would enjoy and grow from, that would incorporate things she was interested in and loved doing in “real life,” whether it was feeding animals at a petting zoo or decorating a cake.  From there our company Paper Boat Apps was born. All the games in Kiddopia are thoughtfully and carefully designed by a parent team who understand the concern other parents have for their children’s education. We realize there’s a difference between games that simply entertain and those that actually teach and help kids develop. To that end, we’ve created Kiddopia to be the best of both worlds.
MM: Kiddopia features information about letters, numbers, health, beauty, animals and a number of other cool topics, so how did you select these topics and form their categories and the games/challenges within them?

Anshu: All the games within Kiddopia have been designed with the help of experts including teachers and parents. We had a tough time shortlisting and getting the best in the app but we were able to do this with the help of little ones who we involve in the development and testing process of all the activities we introduce.
MM: Be honest, have you a favorite segment of games within Kiddopia?

Anupam: Well, we love all the sections in Kiddopia but if we have to choose one, it would be ABC Animals as it was one of the first games we developed and is close to our heart.
MM: What other topics might you expand to in the future? (Ex: history, the weather, geography)

Anupam: Our latest addition is a Math Game for Preschool and Kindergarten students. We plan to launch sections for English, Music, Coding, Pretend Play and Casual Games in the coming months.
MM: How did you get this app animated, produced, and then marketed?

Anshu: We did this all in-house with our talented team of designers and programmers. We used expert professional artists for voice-overs, music and sound effects in the app.  The Apple AppStore featured our app within two months of its launch in August 2017 for the entire month. We have also worked with mommy bloggers and social media influencers who have loved and recommended our app.
MM: Was it tough to get this app recognized and have you been pleased with its growth thus far?

Anshu: We were never doubtful about the potential of the app and have been very pleased that our app has been recognized as one of the best apps for kids by many parents and bloggers around the world. We have also received awards for Kiddopia which inspires us to continue providing the best content for kids.
MM: What experiences involving Kiddopia have been most rewarding and why?

Anshu: A lot of people ask us if we are happy with the number of downloads and revenue we generate but that has never been a concern for us. The only thing that motivates us and we love is when we receive positive feedback from parents. To share one instance, a father once told us that his daughter loves to listen to the ‘Brush your teeth’ song in Kiddopia before brushing and they don’t have to force her to do it. We were delighted to know that we are developing such habits in children and are helping them learn as they grow.
MM: Overall, what are your biggest goals for the future evolution of Kiddopia?