Skip to Content
Home / In the Media SpotLight / The Deccan Chronicle / Jaago Re! 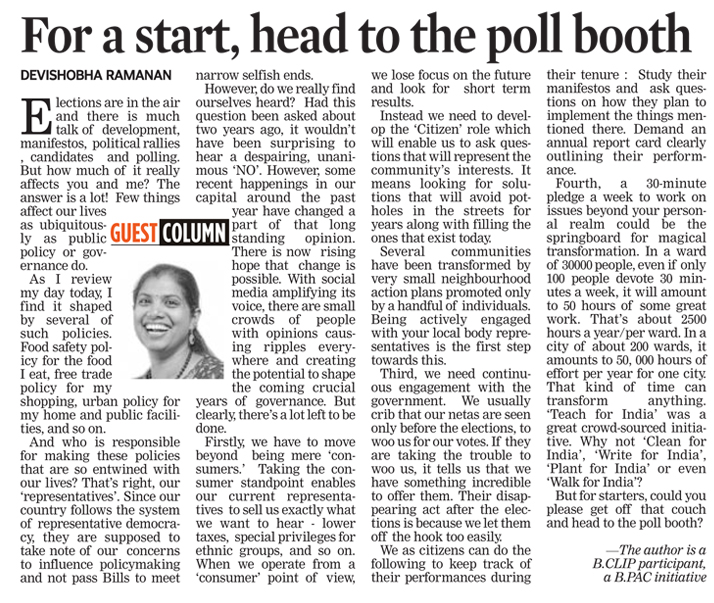 Elections are in the air.  The buzz words are all around us: development, manifestos, roadmaps, political rallies and parties, candidature, nominations, contest, polling, opposition, coalition…

How much of it really affects you and me?

The answer is: A lot!

In reality, few things affect our lives as ubiquitously as public policy or governance.

And who is responsible for making all these policies that are so entwined with our lives?

That’s right, our ‘representatives’. Since our country follows the system of representative democracy, these representatives are meant to carry our voices, opinions and concerns into that room to influence Governance and Policy-making; and not pass Bills based on personal opinions or to meet narrow selfish ends.

However, do we really find ourselves heard?  Had this question been asked about 2 years ago, it wouldn’t have been surprising to hear a despairing, unanimous ‘NO’.  When self-government is dominated by groups representing various self-interests, a vicious cycle of citizen detachment follows. Citizens do not do better than treat civic issues as something outside of themselves. They perceive Civic issues as something done to them by a largely disconnected government body; they are convinced that any kind of association with the Government is a futile and all-consuming burden on their time and resources. The belief that Governance policies are something they have a hand in making and could have a hand in unmaking is practically non-existent. It becomes the classic self-fulfilling prophecy.

However, some recent happenings in our Capital around the past year have changed a part of that long-standing opinion. There is a rising hope and belief that there is more power to us- and that change is possible. Indeed, this is something of a golden age for the people in a Democracy. With social media amplifying its voice, there are little crowds of influencers causing ripples everywhere that have the potential to shape the coming crucial years of Governance. Groups supporting specific causes are more vocal and powerful than ever before because it is so much easier to reinforce your own voices by finding support even among strangers.

But, are we doing enough yet? Clearly, there’s a lot left to be done.

Firstly, we have to move beyond our roles of being mere ‘consumers’ of Governance. Taking the consumer standpoint enables our current representatives or aspiring ones to sell us exactly what we want to hear – lower taxes, some short-term gains, special privileges for ethnic groups, material rewards in exchange for votes.  When we operate from this ‘consumer’ role, we lose focus on the future and instead focus on the short-term results.

Secondly, we need to look at ways of engaging our ‘citizen’ roles radically at the local level. Many paralyzing problems have been solved by just breaking them into human-scale chunks of action. Several communities have been transformed by very small neighborhood action plans promoted only by a handful of individuals. Being actively engaged with your local-body representatives is the first step towards this.  Many of us believe that these representatives do not have our welfare on their priority list. It may be true, but we can put it on their priority list only with our engagement. On the other hand, there are many who welcome suggestions and participation in problem-solving by citizens in their wards.  Creating a localized list of problems for your ward and working on them systematically along with the Government is a great way to spread solutions.

Third- We need continuous engagement with the Government.  We usually crib that our netas are seen only before the elections; to woo us for our votes. If they are taking the trouble to woo us, it tells us that we have something incredible to offer them. They are vested in us as the electorate. The disappearing act after the elections is because we let them off the hook too easily.

We as citizens can do the following to keep track of their performances during their tenure- Study their manifestos. Ask questions on how they plan to implement the things mentioned there. Some of them are just political flak, but there a few with truly progressive ideas. We have heard many ‘whats’ from them- it’s our turn to ask the ‘hows’. Choose them as your representatives even if they are from a party you don’t support. Demand an annual report card clearly outlining their performance. Use indicators like their representation of the ward/ constituent’s voices in the Assembly/Parliament, how well they understand the bills they are required to pass, participation/support in citizen initiatives, etc

Only when we continue to engage with and monitor their performances even after the elections, can we expect good and transparent governance. Our ‘Public Service’ providers are accountable to us – if that does not happen- neither the term “Public” nor “Service” holds any meaning or relevance.

Fourth- We need systematic investment of resources- which includes our time.  A ‘30-minute’ pledge a week to work on issues beyond your personal realm will be the springboard for magical transformation. It can be anything you want to do either as a passion or general good-will. In a ward of 30000 people, even if only 100 people devote 30 minutes a week, it will amount to 50 hours of some great work. That’s about 2500 hours a year/per ward. In a city of about 200 wards, it amounts to 50, 000 hours of effort per year for one city.  That kind of time can transform anything.  ‘Teach for India’ was a great crowd-sourced initiative. Why not ‘Clean for India’, ‘Write for India’, ‘Plant for India’ or even ‘Walk for India’?

There are many things we can do as Citizens.

For starters, could you please get off that couch and head to the poll booth?

An adapted version of this article was published on The Deccan Chronicle.