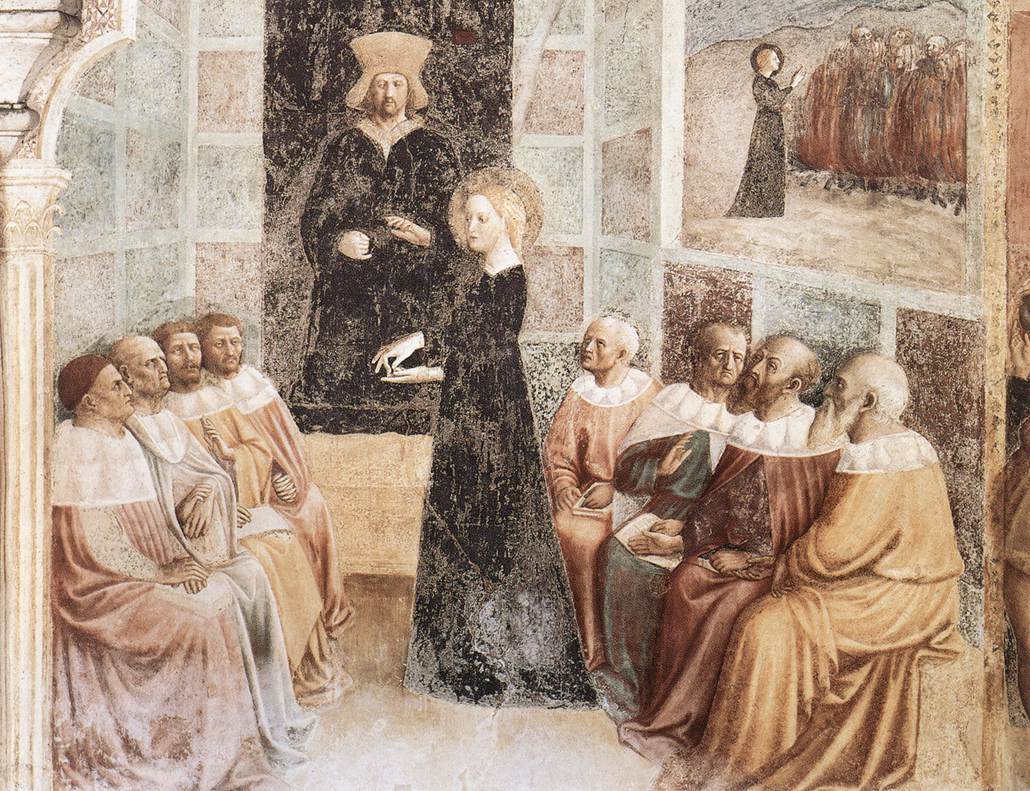 “Woman suspected of witch-powers, gang raped and killed by mob” – not a very uncommon headline, isn’t it? In fact it is not too shocking either, even in this twenty-first century. No, it does not make for any big breaking news, such reports. They don’t even feature on the front page, which is reserved for politicians. This kind of news barely finds a place in a small corner of page 6 or 7 of our daily papers, 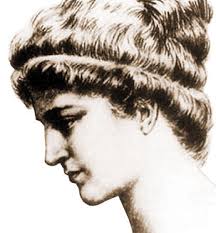 we get over them by the time we have finished our cup of morning tea, concentrating on the sports page, or better still, the page 3 celebrities.

These are not the stories our children should hear everyday. They deserve to hear stories of strong, gritty women and of strong gritty men who brought up such women.

Long back into the ancient times, in the land of Alexandria, there lived a great mathematician and astronomer called the Theon of Alexandria. He had an only child, a daughter. He named her Hypatia. Hypatia was born almost two thousand years back from now, and there is uncertainty regarding her exact date of birth. Some say it is in 355, and some say it is in the year 370.

(The story of Hypatia was made into a movie called Agora(2009), which makes it interesting for kids.)

However, the Theon of Alexandria, the loving father, did not bring her up as a typical daughter, who would be confined to the indoors and meant for serving the kitchen and the chores and make babies. Theon raised Hypatia in an environment of thought. Historians believe that Theon tried to raise the perfect human. Theon himself was a well-known scholar and a professor of mathematics at the University of Alexandria. Theon and Hypatia formed a strong bond as he taught Hypatia his own knowledge and shared his passion in the search for answers to the unknown.

[bctt tweet=”Why we should be telling our daughters these TRUE stories- not just fairy tales. ” username=”@kidskintha”]

As Hypatia grew older, she began to develop an enthusiasm for mathematics and the sciences – astronomy and astrology. Most historians believe that Hypatia surpassed her father’s knowledge at a young age. However, while Hypatia was still under her father’s discipline, he also developed for her a physical routine to ensure for her a healthy body as well as a highly functional mind. In her education, Theon instructed Hypatia on the different religions of the world and taught her how to influence people with the power of words. He taught her the fundamentals of teaching, so that Hypatia became a profound orator. People from other cities came to study and learn from her.

When her father died, Hypatia took over his work and started to teach.  She went on to become the head of the Neoplatonic school at Alexandria, where she taught mathematics, philosophy and astronomy. She imparted the knowledge of Plato and Aristotle to students, including pagans, Christians, and foreigners.

Hypatia’s life began to unfold with a lot of interesting events.Admired by all in Alexandria, Hypatia was one of the most politically powerful figures in the city. She was one of the few women who attended civic assemblies.

Magistrates and Bishops came to her for advice. In the midst of severe religious polarization, Hypatia was an influential force for tolerance and moderation. She accepted students, who came to her from everywhere without regard to religion.

Hypatia lived in Alexandria when it was a turbulent time in the history of the world.

Christianity started to dominate over the other religions. In the early 390s, riots broke out frequently between the different religions.

However, without regard to the threats or the protests, Hypatia continued to impart education to all her students; she also made it a point to appear in public gatherings where women were generally prohibited. Hypatia’s house was an important intellectual center in a city distinguished for its learning. Damasius described how she used to put on her philosopher’s cloak and walk through the middle of town to give public lectures on philosophy. Her disciples certainly regarded her in the light of a spiritual leader. Synesius of Cyrene called her ‘the holiest and revered philosopher’, ‘a blessed lady’; and ‘divine spirit’.  She also continued to serve as a common meeting point for students from all religions, which was a big point of contention in that time due to religious divides.

Hypatia ultimately fell victim to the political jealousy which at the time prevailed.

A rumor spread among the Christian community of Alexandria blaming her for the communal differences and political conflicts. She was blamed to be practicing black magic and witchery, and the Bishop started to condemn her publicly. 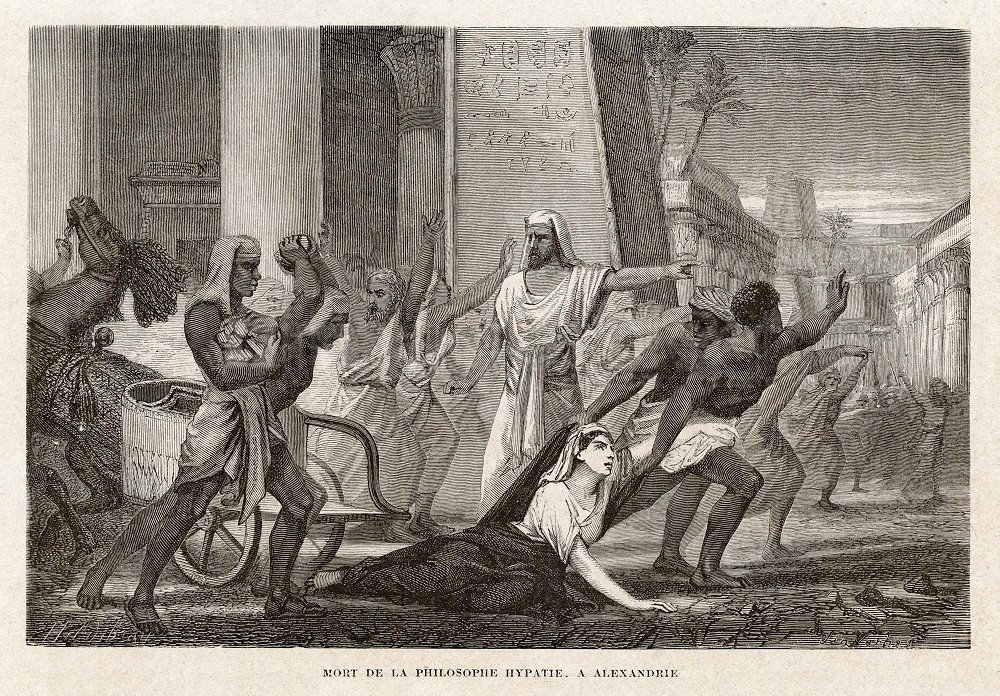 In the year 415, one day, they published an edict regarding public exhibitions in the city of Alexandria and all citizens gathered to read the edict. A group of Christians, under Peter the magistrate, went looking for Hypatia, the pagan woman who had beguiled the people of the city and the prefect through her enchantments. They found her sitting in her carriage, at which point they seized and brought her to the great church, where they proceeded to rip the clothes off her body. Then they dragged her through the streets of Alexandria until she died. They burned her remains by the roadside.

After her death, anti-Christian letters of politically vicious nature began to appear under her name, which were soon proved to be forged by the Counsel. Later on, several religious leaders have blamed her for having illicit relationships with certain leaders. However, as historians went on to prove later, those leaders were not even born until her death in the year 415.

As far as her contribution to the field of mathematics and astronomy go, no written work widely recognized by scholars as Hypatia’s own has survived to the present time. Many of the works commonly attributed to her are believed to have been collaborative works with her father, Theon of Alexandra. This kind of authorial uncertainty is typical for female philosophers in the pages of history.

Dear readers, as we customarily read our history text books or teach them to our children, we need to be aware that history is political. It is written based on what has been let to politically survive and be documented. It is important to know that in western philosophy, women have almost been entirely wiped out of the intellectual history until the twentieth century – some by neglect, some by omission, and some, like Hypatia, by violence.

They say, history repeats itself. I cannot say if that is true, but I do pray that it is.

Because we need women like Hypatia to be born again and again. But alas, they don’t make them like her anymore!

The Real Story of Pocahontas