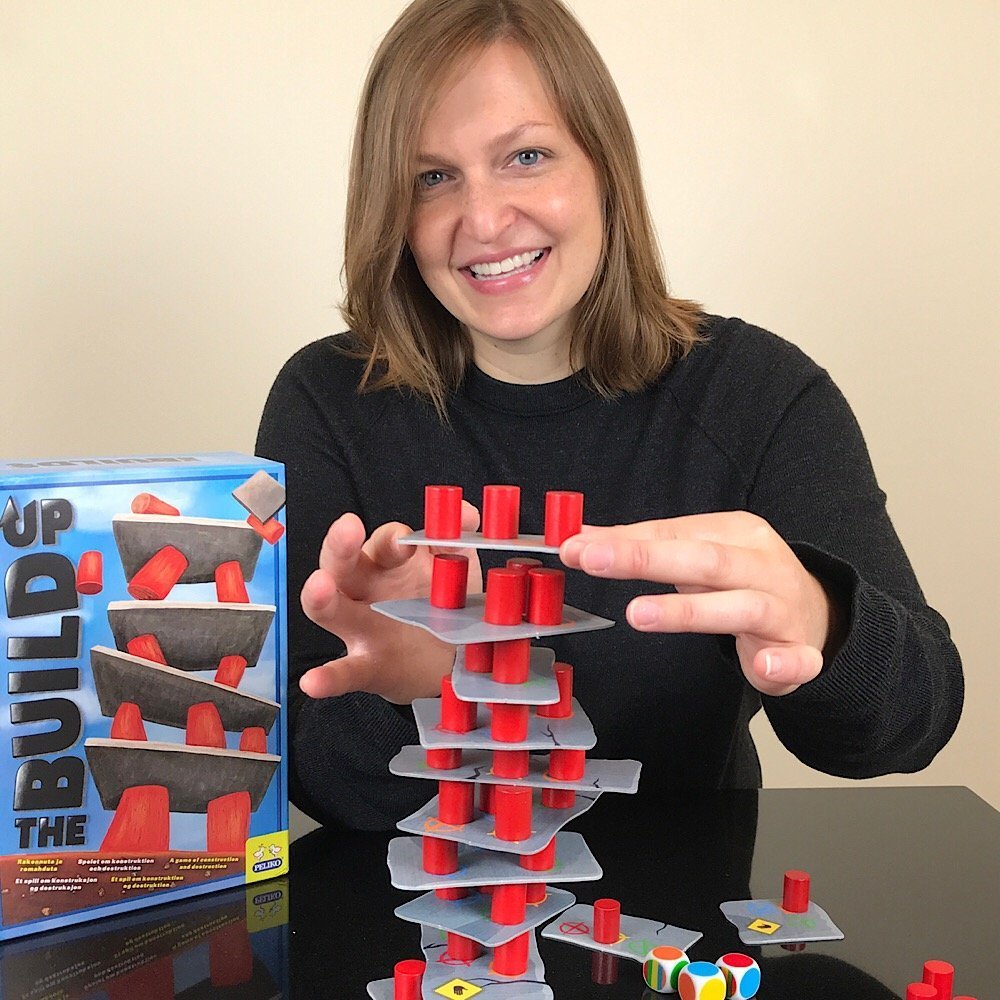 “Heads Talk, Tails Walk” is a new game for preschool children by game designer and entrepreneur Kim Vandenbroucke. The founder of Brainy Chick Inc., Kim is also a blogger who has a deep love for the toy industry.

Kim has created many games ranging from party games to family games. Although she has a history with trivia games, her latest release is a fun card game that gets players moving!

“Heads Talk, Tails Walk” challenges two to five players ages three years and older to match head tiles to the correct body tiles to create a total of ten characters. If the head and body don’t match, the real fun begins because players can walk and talk like the mismatched tiles—with hilarious results!

Kim recently discussed her creations and more via an exclusive interview.

Meagan Meehan (MM): When did you discover your love for games and how did you break into the toys and games industry?

Kim Vandenbroucke (KV): I grew up in a family that loved playing games. So, when I was studying Industrial Design at the University of Illinois and I needed to select some companies to meet during a career fair, I thought the toy and game invention firm sounded fun. That company, Meyer/Glass Design, was where I got my start as a toy and game inventor. I never really set out to do this sort of work, but I’m so extremely lucky that I found it!

MM: How did you come up with the concept for “Heads Talk Tails Walk”?

KV: Pretending to be an animal and making animal noises is so familiar to kids. So, I took that familiar play pattern and amped up the silly by only asking kids to do it when they got a wrong match. It just felt like it was funny from the start right through to the end of the game, and to me that’s a big win!

MM: How did you select the ten animals feature in the game?

KV: Obviously, the animals that are featured in the game need to have both a unique sound and movement. I also wanted to include animals, like the dinosaur, that kids already act out in their play. Out of the final ten animals, most of them were included in my prototype, but a few were changed by Think Fun.  I think the final ten they selected are great choices!

MM: How did you come to work with “Think Fun”?

KV: I’ve been pitching concepts to Think Fun for many years, but it took a while to find the right fit.  I’m very excited to finally have a game of mine added to their portfolio as I’m a big fan of their products.

MM: What was the most challenging part of creating this game?

KV: I think it probably was picking the right mix of animals to get the awesomeness of the game across in my prototype. A prototype doesn’t need to be perfect, but it needs to be a proof of concept. I felt that I needed to prove that there were a bunch of animals that had really different sounds and movements, enough to make the whole game be ridiculous and fun when played.

MM: What has player response been like so far and what do you personally regard as the silliest combination?

KV: All of the children that I’ve played it with seem to love it. Maybe they’re being polite, but there’s always a ton of laughter so I’m guessing they genuinely enjoy it. Personally, I like just about anything with the dinosaur body. Stomping around with little arms and clucking like a chicken or ribbiting like a frog will crack me up every time.

MM: How many games have you created to date and what are their themes and play patterns?

KV: I’ve been inventing since 2002 and there are quite a few on the market from very young cooperative games to family party games and all sorts of stuff in between. My biggest recent success is “Peeing Pup” with Hasbro and last year I had Party Game of the Year in Finland with “The Build Up” by Pleiko. I celebrate every time I sign a licensing contract, but as an inventor, I need to keep looking forward. Games can take forever to find their home and make it to the market, and my job is to keep going and think of the next great thing.

MM: You also own your own company! So how did that come to be and was it tough to get it off the ground?

KV: Yes, I do, Brainy Chick, Inc. I started my company in 2006, shortly after Meyer/Glass Design closed. I thought about doing some other form of design, but quickly realized I’d miss the toy and game industry. It’s been a fun and interesting journey! I had contacts at most of the larger companies, but had to meet some of the smaller companies. I’m lucky enough to live in Chicago, so attending the Chicago Toy and Game Fair (ChiTAG) every year really helped me meet and cultivate so many relationships — like Think Fun. The first couple years I did a ton of development work and brainstorming facilitation outside of the toy and game industry, but once the royalties started coming in, I shifted my focus to mainly inventing. I still take on some of those outside projects, just because it’s fun to change things up every once in a while!

MM: To date, what has been the most rewarding part of working as a game designer?

KV: I love hearing stories of people playing my games and really enjoying them.  Strangers, friends of friends, old friends, neighbors — anytime one of them takes the time to reach out and say they played my game and love it, it makes my week!  Knowing I’m making happy memories is the best feeling!

KV: Honestly, I hope I’m still doing what I’m doing. It would be awesome if there’s a great deal of success in those ten years, but this is my dream job and I really enjoy it!

MM: What advice would you give to someone who is striving to enter the game design industry?

KV: First, recognize that there’s a hobby market and there’s a mass/specialty market. These are different and breaking into them requires different strategies. If you want to be in the mass/specialty market (like me), attend the Chicago Toy and Game Fair if you can, if you can’t buy the Toy and Game Inventor’s Handbook. These are two resources I find super valuable and they have been since early in my career. You don’t know what you don’t even know to ask about. It’s a tough industry to break into and you can easily waste a ton of time and money and get nowhere.

KV: I’m not at liberty to share the games that are coming out in the future, but you can check out a few other games that came out recently: Pick Me Up, Piggy! and Button Button Belly Button by Peaceable Kingdom, Chill Out by Gamewright and my longest running game is Scattergories Categories by Winning Moves. Also, I’d love to mention that I’ve been nominated for a TAGIE Award this year. The TAGIEs are the Toy and Game Innovation Awards and I’m up for Game Innovator of the Year, which is very exciting!  Voting opens up on September 18th: https://www.chitag.com/2019-toy-game-innovation-awards