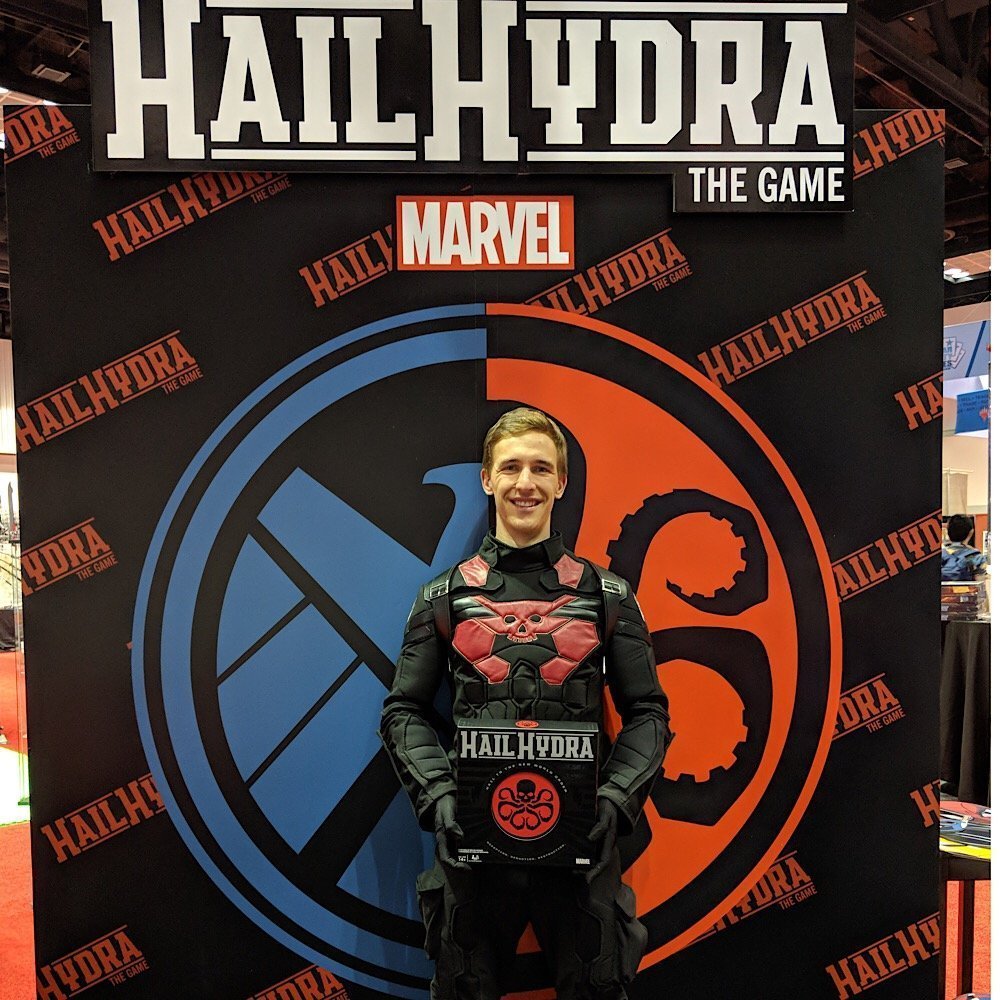 Nick Metzler, a young board game designer who created Hail Hydra-a board game centered in the Marvel Universe, is nominated for the Rising Star Award at the Toy and Game Innovation Awards (TAGIEs) for his efforts creating the game. According to the official description:

Deception. Deduction. Destruction. In Hail Hydra, you and your friends team up as Marvel’s S.H.I.E.L.D. heroes to save New York City! But wait — your fellow heroes may be villainous HYDRA operatives in your midst! Use social deduction to determine who is a secret HYDRA agent and who is truly loyal to S.H.I.E.L.D. If you succeed, you and your fellow S.H.I.E.L.D. heroes will retrieve the Cosmic Cube from the Red Skull and save the city! If the city is destroyed, HYDRA wins.
Nick got his start in the industry 8 years ago as a contestant in the Chicago Toy and Game Week’s Young Inventor Challenge (YIC). At 16 years old, he took home the gold. Then at 17, won YIC again and his winning game that year, Squashed, went to market. Today, Nick works for the powerhouse toy and game manufacturer Spin Master. He and his team of collaborators have churned out more than half a dozen new games in the last year including: Hail Hydra, Battle of the Sexes, The Dog Game, Killer Party Kiss of Death, Killer Party Bone Appetit, Killer Party Fangs For the Memories, and the Rusty Rivets Quick Bits Path Game.

The TAGIEs recognize the best and brightest innovators, designers, and marketers in the toy and game industry. These awards are distributed based on popular vote, open to the public, which is currently taking place. Now celebrating its 11th year, the awards are announced at a gala on Friday, November 16, 2018, during Chicago Toy & Game Week (ChiTAG). Past winners of the Rising Star Award include Debra Sterling of GoldieBlox, Laurie Peterson of Build & Imagine, and Alice Taylor of MakieLab.

Nick recently discussed his career, and the game, via an exclusive interview. 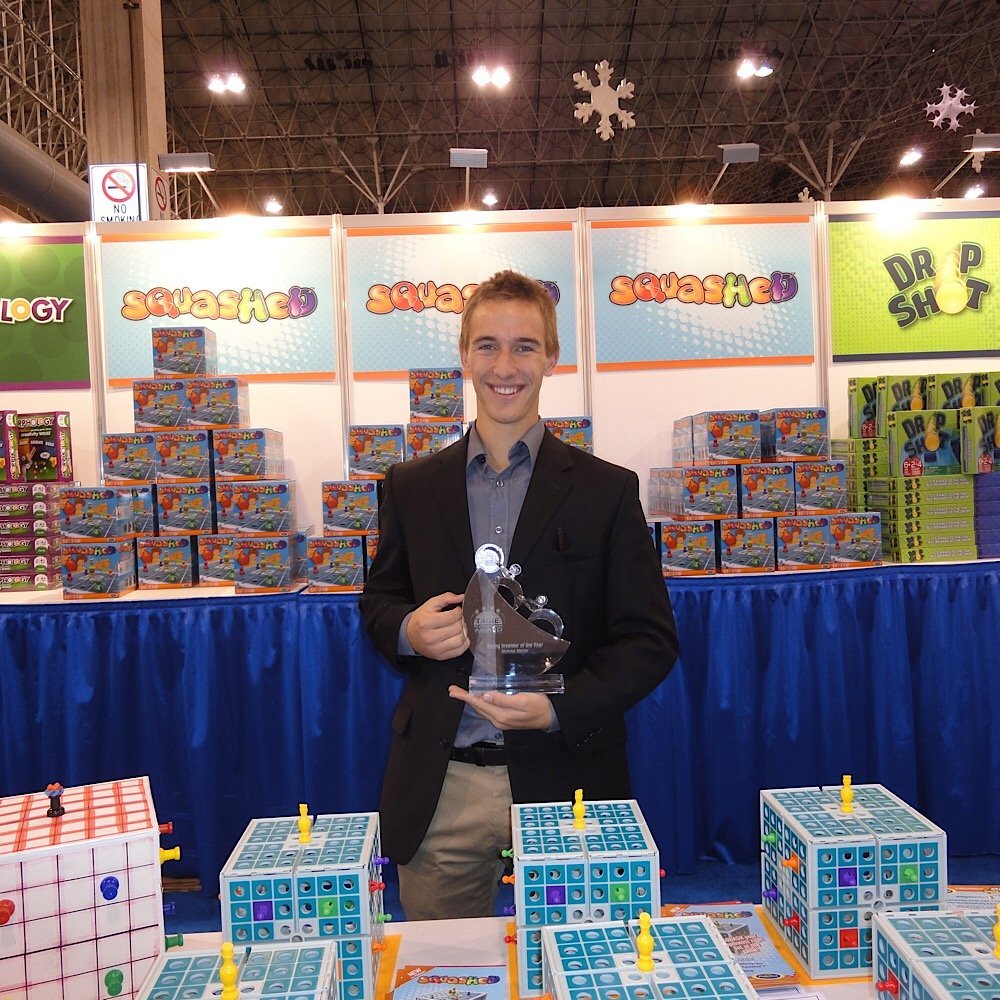 Nick currently works for Spin Master which is a major toy company.

Meagan Meehan (MM): How did you get into making games, and which games most inspired you?

Nick Metzler (NM): I started designing games when I was only 4 years old! I loved Super Mario Bros. and Super Mario 64, so I created my own levels with puppets and paper out of the worlds that I liked the most. After realizing that these games were super boring for everyone other than me, I looked at other games that people generally liked. Chess was a popular game in my childhood, but I hated how much time each move took… and the game was so long! I created a much faster version called Extreme Chess when I was 7 to fix these problems that I saw- pawns could now move and capture in any direction; rooks became cannons and could wipe out an entire row or column in a single shot (with a one space recoil); kings could be captured without saying ‘check’. In essence, I made each turn result in the capture of a piece. I usually tried to ‘fix’ games when I was a kid; it provided most of the inspiration for my early designs.

MM: How did you find your way into toy contests and what was it like to win?

NM: I got quite lucky with my start in the industry. My mom saw an ad for the Chicago Toy and Game Fair in our local newspaper, and thought it would be a great experience for my sister and me. As a 15-year-old, I went to ChiTAG and while there, stumbled onto the Young Inventor’s Challenge-which is like a science fair for toys and games. After looking around I made the decision to win the competition the next year and followed through on that decision with back to back first places when I was 16 and 17. Winning the competition was unbelievably and absolutely life shaping. I can’t give enough thanks to my family, peers, and mentors that helped me get to that point. Part of the prize package those years was the opportunity to go to the New York Toy and Game Fair-an industry-only event, not open to the public like ChiTAG-and see the industry first-hand. While there, I was able to make contacts that eventually launched my first board game, Squashed, into market.

MM: When did you know that you wanted a career in the toy industry?

NM: This is a daily choice, it’s still in flux. I’m a game designer- I love to design environments where anyone can experience emotions in a safe space. I enjoy seeing how game design can be applied to any medium; much like there are different forms of storytelling. The toy industry has been instrumental in my training and I can’t be more grateful for the opportunity, and the amazing people I am blessed to work with every day. The toy industry has given me a platform to crank out a large volume of games quickly, whereas in a different one-like the video game industry-I’d be handcuffed to a single game for at least a year.

MM: How did you get a job with Spin Master, and what do you most enjoy about working with them?

NM: I cold called Spin Master in my Junior year of college. I looked at the companies that were near me while at the University of Southern California, and fell in love with Spin Master’s core values and mission to “Make Life More Fun”. It matched my mission exactly, and I thought it was worth a shot. It’s worth noting that I met my Spin Master contact at the New York Toy and Game Fair-the prize trip from the Young Inventor’s Challenge. Spin Master’s culture is quite unique for such a large organization. I studied entrepreneurship in college and was looking for a place where I could flex my creative muscles. Spin Master’s culture is quite similar to that of a startup, from the creative side- if you have an idea and you can build the business case behind it, the leadership is willing to take your recommendation. It gives you autonomy and a feeling of ownership which is quite addictive. It’s for this reason I’ve stayed since!

MM: How many games have you created to date?

NM: I’ve created 16 so far. I’ve got 2 more coming out by the end of 2018. I’ve also got an additional 5 currently lined up for 2019, and even more for 2020. Not only that, but I’ve also produced 4 other games, which is quite similar to how a movie producer manages a project; shepherding an excellent creative idea through the system, and onto market.

MM: Hail Hydra is based on a Marvel comic, so how challenging was it to blend the game style with the storyline?

NM: Hail Hydra was a dream to work on! My favorite category of games is social deduction games, and the Hydra theme fit it perfectly. We focused more on the theme of Hydra, and the concept of allies working with you… but they’re actually sabotaging your team! We definitely wanted to yell the phrase ‘Hail Hydra!’ at some point, so the game design followed that direction. The basic premise was: Get a group of people working together, some people will secretly sabotage the group, and eventually reveal their subterfuge by yelling ‘Hail Hydra!’ The design pieces pretty much fell into place, so we then picked characters for the game to match the comic storylines.

MM: What do you like most about this game?

NM: Hail Hydra fixes to everything I dislike about currently available social deduction games. Having the opportunity to fix these issues was my favorite part of designing the game. Below are my fixes:

– Every character, and enemy, in the game feels unique, and presents a different strategy. You can choose who you want to play as, giving you more control of the experience

– Everyone is playing the whole time. You could get sand-bagged, but you still have a voice

– You can never be 100% sure of anything, eliminating the ‘alpha gamer’ syndrome-in which one person tells everyone else what is happening, and there’s no point in contradicting them

– You get to reveal your loyalty at critical moments, usually resulting in dealing the final blow to the other team, and ending the game

MM: The graphics are really cool! How involved with that were you?

NM: Mad props to our packaging team, specifically Geizi Guevara, for leading the charge on art direction. It’s because of this art that the game gets picked up and played so often. We worked hand in hand to develop the look of it, but he deserves the credit. He’s also nominated for a TAGIE for his (and his team’s) work on The Cat Game!

NM: When launching Hail Hydra at Gen Con 2018, our marketing team created, and ran a ‘GameStop Takeover’. We handed out secret Hydra invitations on poker chips and brought 200 new Hydra recruits to the Game Stop near the convention. I dressed up as Captain Hydra (a brainwashed Captain America working for Hydra) and taught the game at the event. Seeing how the fans interacted with the environment that I built was quite fun to experience!

MM: Overall, what are your biggest goals for your future in the toy industry?
NM: My biggest goals are to continue improving my designs. I’m not perfect yet, but I learn new and important lessons with each game I place on market. I’d also like to expand the toy industry to include more than just kids. We’ve already seen an expansion to the young adult market and I’d love to help pour jet fuel on that. Adults are playing more and more games, and I’d love to hear that one of my friends loved a new game, without knowing it was mine.

NM: Games are powerful ways to experience life. I can’t wait to create more elaborate environments that allow people to learn life lessons, without the typical limitations they might feel when facing big decisions. My hope is that someone will be able to point at playing games as a reason that they were successful in life. Games have helped me think in an abstract way, and filter through a plethora of options at a rapid pace. I can’t describe how impactful that skill set has been in my own life. I’d also like to give a big thank you to Mary Couzin and the Young Inventor’s Challenge for showing me the path that has led me to where I am today!

To purchase a copy of “Hail Hydra,” see here. 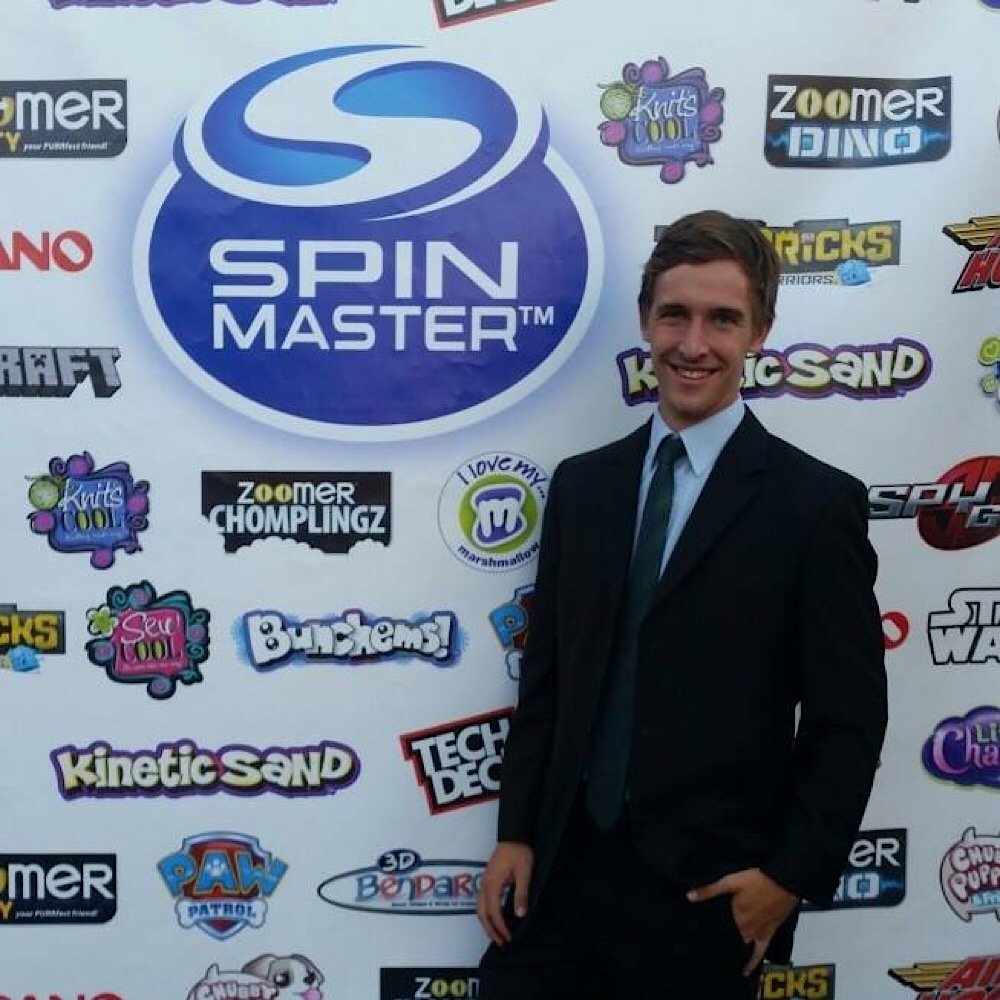 “Hail Hydra” is based on the MARVEL franchise.