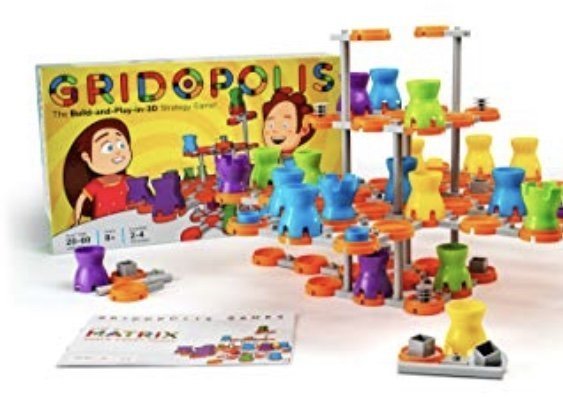 Gridopolis is a new three-dimensional tabletop game that is innovative, fun, and requires strategy. Created by award-winning designer, entrepreneur, and educator Dave Schultze, Gridopolis is now officially on Kickstarter.

Gridopolis was play-test and perfected over the course of several years with Schultze’s Toy Design students, where he teaches at OTIS College of Art and Design in Los Angeles. This helped refine the game, rules and features until it was ready for public release. Gridopolis’s innovative and multilevel gameplay is easy to learn and fun to play. At the beginning of each game, each player gets extra parts. Games are dynamic as players move, jump AND build in three dimensions using the extra parts. That means the game space can actually change during a game! The game your start out with is not the game you end up with. The game’s simple and modular design also allows gamers the freedom to create their own original games. This breakthrough in the way people play AND create games is generating a lot of attention and rave reviews  from gamers, parents, and STEM educators. It may look complex, but the entire set has only seven unique parts. Rules are borrowed from games you already know, like checkers, chess, and tic-tac-toe. This gets you up and running fast! Anyone (ages 8 and up) can start having fun right out of the box.

Game designer Dave Schultze recently granted an exclusive interview where he discussed the creation of this game and more.

Meagan Meehan (MM): How did you initially get interested in designing games and how did you break into the industry?

Dave Schultze (DS): As a chronically creative individual, I’m always designing new things. My design interests range from architecture to furniture to product design … and everything in between. As for breaking into the industry, my first introduction was thanks to teaching in the Toy Design Department at OTIS College of Art and Design in Los Angeles. The department chair and other instructors were extremely generous in making introductions, so that’s how I got my first few connections and clients.

MM: How did you come up with the concept for Gridopolis?

DS: As the founder of SchultzeWORKS designstudio, a product design consultancy, I’m always looking for opportunities to innovate and develop new concepts. Once they are developed far enough along, I like to pitch them to my contacts and see if there is any interest in licensing. As it turned out, all of the toy companies passed on Grdopolis! The odd part was they were universally complimentary about the high level of design and innovation; they simply felt it didn’t fit into one of their already existing categories.

MM: You are a teacher, so how did that help in the game’s development?

DS: It made all of the difference! Since the project evolved over a period of several years, about a dozen different Toy Design Students at OTIS contributed to the effort. They were the perfect audience as they tested what worked and didn’t work and were brutally honest. Each week, I would return with corrections and new ideas. Their enthusiasm and feedback played a big role in keeping the effort moving along.

MM: How did you create the prototype and how different was it from the final product?

DS: The prototypes were first designed by hand with rough sketches. I then built the CAD files using a 3D design software called Rhino. Models were then fabricated in my office with a 3D printer, which was a HUGE benefit compared to going to an outside vendor. I was able to get faster and more frequent design iterations and at a much lower cost. Surprisingly, the vast number of prototypes we created helped the manufacturing go very smoothly. Our factory was complimentary about the designs being so accurate, so they only needed a minimum of engineering tweaking to prepare for production. So, to answer the question, the final product was very close to the last prototype, but totally different from the first prototype.

MM: What was the process of finding a company to produce it like?

DS: I was very fortunate, actually. One of my very first advisors had worked for years with an established Chinese manufacturer, so they made a personal introduction. Even if that hadn’t happened, I was well aware that established relationships were key to successful manufacturing. I would advise anyone else looking for manufacturing to start with an introduction or use a sourcing company to help out.

MM: What’s your favorite thing about Gridopolis?
DS: At the very beginning of development, I was hoping to create an original strategy game by taking it into the third dimension. Along the way, it steadily evolved into a very dynamic and modular gaming system. Later, that modularity has propelled the system into further new territory as a ‘game design laboratory.’ This helps kids be more creative, logical and social all at the same time.

MM: Why did you decide to launch a Kickstarter to support it?

DS: I’ve been a fan of Kickstarter since the beginning. It’s quite amazing when you think that any individual or small company can now take their ideas straight to the public and bypass the usual gatekeepers. Besides the financial opportunities, I see Kickstarter as an even better platform for promotion and brand-building. All of the interviews and reviews we have received during the campaign have been very effective in raising our visibility. Plus, once you get successfully funded, that’s just another vote of confidence.

MM: How many games have you designed overall?

DS: I have designed dozens of consumer products for kids, both commercial and educational. However, this was my very first game! I think that is the perfect challenge for a designer as it gives you a totally fresh take on the category.

DS: Seeing my design work get recognized, but more importantly, seeing it benefit others. Three of my educational toy designs have been nominated for Toy of The Year, so that was extremely rewarding. But, it’s just as cool to hear users talk about my work and how they enjoy it.

DS: I plan to grow Gridopolis Games into a new ‘classic brand!’ We use the word classic to help us highlight that we are intent on appealing to a wide range of fans; from game-playing nerds, to families, to educators. That’s a lot! The potential is very clear that our product can expand into a larger line of branded and related products. Even though we are an emerging brand, the reviews and feedback has been overwhelmingly positive.

MM: Are there any upcoming events–or impending releases–that you would like to mention?

DS: Our first Kickstarter crowd-funding campaign is open until Wednesday, August 22. You can find out more (and maybe even pledge!) by visiting the page at https://www.kickstarter.com/projects/gridopolis/gridopolis or www.gridopolis.fund