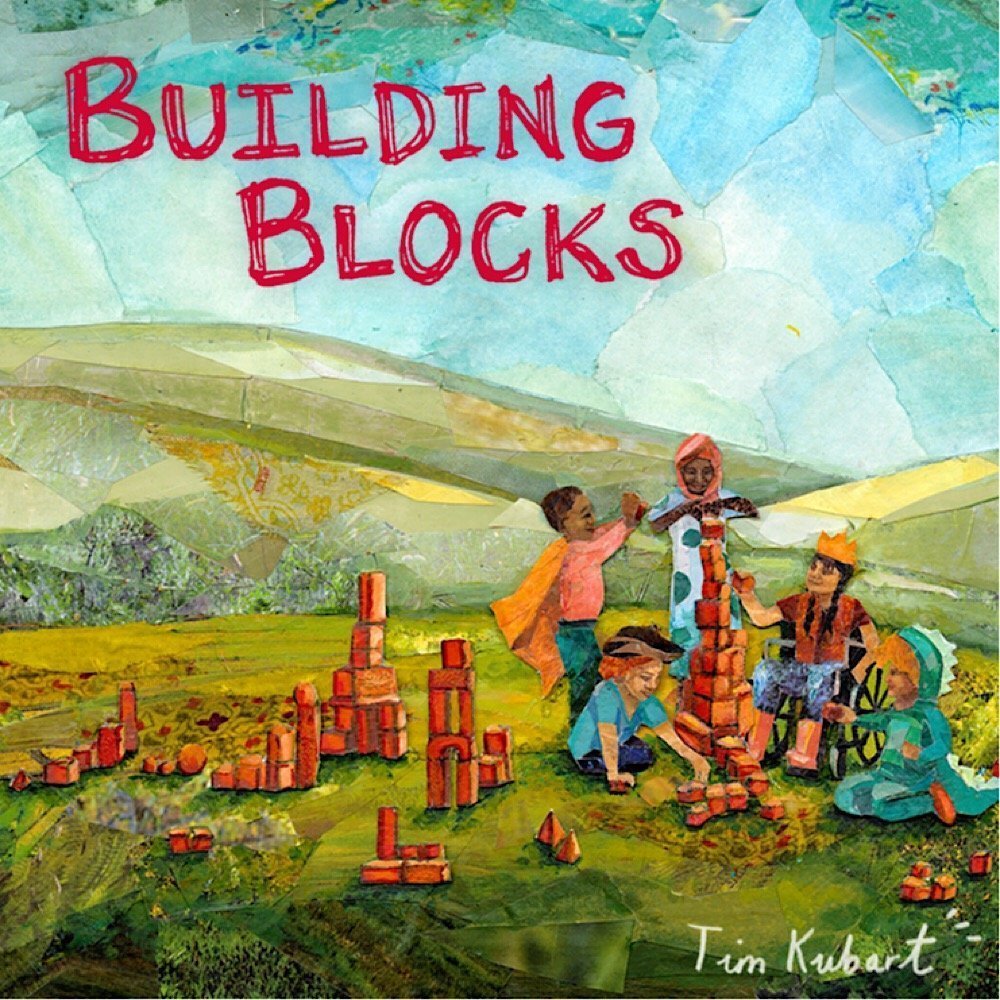 Tim Kubart is a Grammy Award-winning musical artist whose album of 12 original songs titled Building Blocks on September 28th. The album is a pop celebration all about growing: growing wiser, growing bolder, and, above all, growing our circle of caring for family, friends, and those around us.

Tim Kubart is the 2016 Grammy Award-winner for Best Children’s Album, a television and podcast host, children’s book author, and “Sesame Street” songwriter. He has earned a prominent place in the family music world for get-up-and-dance tunes that connect with kids by speaking to the experiences that shape their world. With joy-filled songs about events and activities from the first day of school to field trips and block parties, Building Blocks celebrates the way new challenges bring new opportunities to care.

Kubart won the Grammy Award for his 2016 album Home. He has worked on numerous family music projects, most notably “Sesame Street.” His first Sesame composition “We Can All Be Friends” is the introduction of Julia, the first Muppet with autism. The encouraging “Oopsie-Do!” on Building Blocks is also the title of Tim’s acclaimed first picture book, published by HarperCollins earlier this year. Kubart won national notice as host, producer, and writer for the Emmy Award-nominated LIVE show for preschoolers, “Sunny Side Up” on NBC-Universal’s Sprout Channel. Today, he co-hosts the “Highlights Hangout,” a podcast for Highlights magazine, which brings the trusted brand of puzzles and games to a new medium.

When he’s not singing and dancing for kids, Kubart is known the world over as the “Tambourine Guy” from the viral collective and internationally touring Postmodern Jukebox. He recently discussed all of this and more via an exclusive interview.

Tim Kubart (TK): I initially got involved with music because of school. I credit my elementary music school teachers with teaching me to love music and making it with other people. My sound is defined by all of the performances I’ve had for kids and families. I have played more than 5,000 mommy and me classes, 1,000 birthday parties, and 500 concerts for kids and families. Meeting so many kids, I find that so many request modern pop songs. I love pop music myself and think taking these modern sounds, but writing songs about childhood and speaking to kids and their true experience, would resonate. It’s always a fun experiment, and I’m so happy families have connected.

TK: I write these songs with two of my best friends, Dominic Fallacaro, and Matt Puckett. We went up to a cabin and talk about what’s going on in our lives, what kind of music we want to make, and what we want to say in it. It’s a very special time and the songs just come out. Normally music and theme come at the same time, and we fill in the lyrical gaps throughout. We are all working with each other passing off ideas until something new is built. It’s all a very exciting time when we get to do that.

MM: Can you tell us about the 12 songs on your most recent album?

TK: My newest album is called Building Blocks, and it’s all about caring. It’s about how our hearts grow as we do. We talk about friends, communities, new pets, big steps, all things that help us grow and care more. I like to say as we go so does our circle of caring, this is very true for children, but if we allow it, it’s true for adults as well.

TK: My favorite song on Building Blocks is “Ready For You.” It’s all about saying that you can take on the responsibility of a pet. It says that once you are good at taking care of yourself, you are ready to take care of someone else. I think it’s a very true story for a child, and I hope adults hear the underlying metaphor of being ready to care.

MM: You have also written songs for “Sesame Street,” so which segments did you make songs for and what was it like to work with that legendary organization?

TK: Oh, Sesame is a dream. We (me and my two songwriting partners Dominic Fallacaro, and Matt Puckett) are sent a few lyrics to work with and we come back with a song. The two most exciting ones have been “We Can All Be Friends”, that was the introduction of Julia, the first Muppet with autism. We also composed “Thank You Cloud,” a BIG pop song that Elmo, Abby Cadabby, and Ellie Goulding all sing together. When Sesame is shooting one of our songs, we also are allowed to come to set and watch them work. It’s an amazing thing to see.

MM: You’re a Grammy Award winner. What was it like to attend the ceremony, hear your name called, and then hold the award in your hand?

TK: Oh, it was a blur. I was doing press and red-carpet pictures almost all the way up to the category being called. My band members were texting me telling me to get to my seat. I was probably only sitting there five minutes before our category. When my name was called I was taking a picture of the screen that had all the nominees. I figured I wouldn’t win and wanted to capture the cool moment that my name was on the screen. I shouted “WHAT!” to my bandmates and at that moment told them they should join me on stage. I had written a few names down on a piece of paper from my hotel (mom and dad, sister, etc.), and pulled it out. I had no speech prepared but just said what I was feeling. Right after I got off stage Alice Cooper shook my hand and said: “hey man, great speech.” Surreal.

TK: I love when kids who watched “Sunny Side Up” are confused when they meet me. I’ve been told before “how did you get out of the TV?” and “I didn’t know you were in real life.” Mostly though I love it when families tell me that my music and work is something they all share. Knowing that I’m there in the car with them on a long trip is an honor and privilege and I take that position with pride and it drives me to do the best work I can. I think filling that space is sacred and special.

TK: I found music for children during college. I was volunteering at a homeless shelter for women and children because to graduate my Jesuit school I needed to put a certain amount of hours into community service.

MM: What inspired you to create a children’s book and what was the publishing process like?

TK: That’s a medium I’ve always wanted to work in. I met my publisher, Nancy, when one of her other authors came for an appearance on “Sunny Side Up.” We chatted about the work that I do, and she brought me in for a meeting. We brainstormed with a few people on what my book could be, and came up with “Oopsie-Do!” I worked on the manuscript, and also the song that goes along with it, and then it all gets handed over to the publisher and illustrator, Lori Richmond, to build the rest of the book. It’s a long process but I’m really happy with the outcome.

MM: Might you make more books based on your lyrics?

TK: I try not to give myself goals beyond keep making good (good in the sense that it has a purpose) work, and work with people I want to work alongside. I used to have more tangible goals. They were: be on a children’s television show with a puppet, be in the Macy’s Thanksgiving Day parade, and in the children’s album Grammy. I was able to make them all happen. Being on the other side of your goals and in your mid-30s is a funny place to be. I realized that every single one of those was a gift and I’m so grateful for the opportunity, but none brought me the lasting happiness I thought they would. Now, I’d like to take the skills I have built, and do good work using them. And then personal goals of family, happiness, all that stuff, those are my goals.

TK: Yes! I’m also currently hosting a podcast for Highlights magazine called the “Highlights Hangout” (https://www.highlightskids.com/podcast). It’s super fun. Games, puzzles, stories. It’s basically Highlights Magazine brought to life in a new medium. There are characters like Goofus and Gallant stopping by and Ask Arizona. It’s been a really great experience so far and we’ve gotten great feedback from families. You can find it wherever you listen to podcasts. There’s also something brand new and for preschoolers coming from Postmodern Jukebox that I’m working on. I can’t say much about it yet, but it’ll be very silly. If people aren’t aware of what PMJ is, it’s a rotating collective of musicians that take modern pop songs and play them like they are from different areas. It’s the only thing I do that’s not specifically for kids, and we’ve built up over four million subscribers on YouTube. I’ve also been able to travel the world with them. PMJ has played to sell-out crowds in six continents, and I can’t wait to share what we have in store next.

To get all the Tim Kubart news, please visit www.timkubart.com. His new music video for the song “Day One” is here: https://youtu.be/0FALV25OLJU

Evan and Vanessa: A Musical Duo Releases “In Our World There Are No Strangers” Album