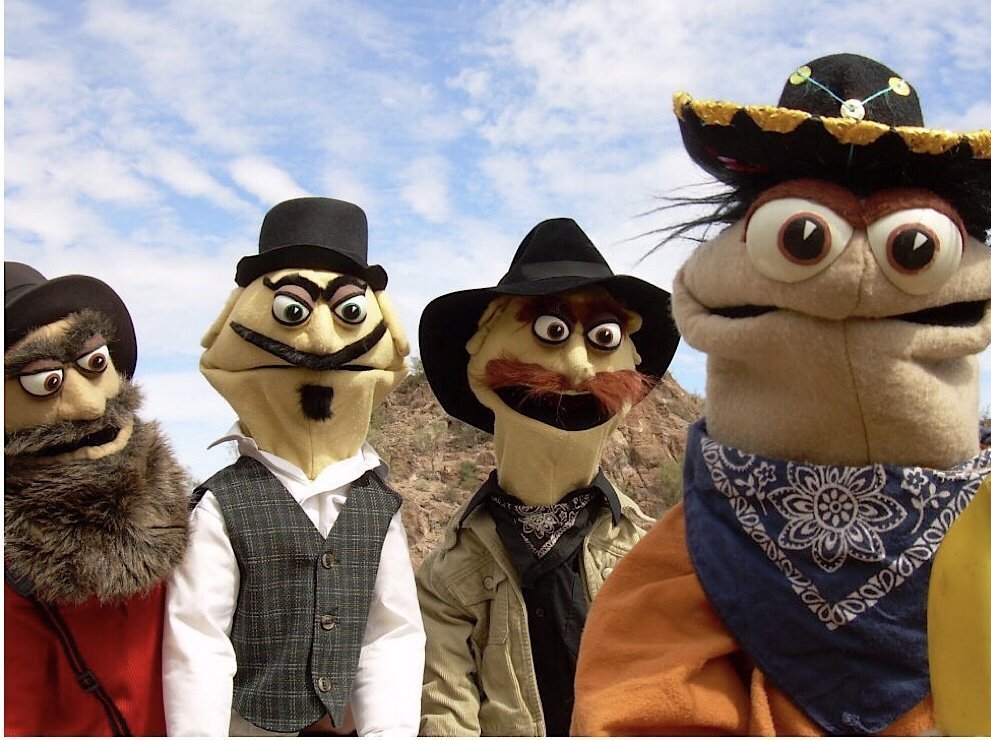 Frogtown Mountain Puppeteers are a leading children’s puppet play company that are now producing “The Legend of the Banana Kid” in New York City. The performance will occur from Saturday, November 10 at 11 am and 2 pm. According to the official description:

Little Chucky heads to the Wild West to outwit outlaws in this cowboy adventure!  With a fistful of bananas, Chucky rides into town on his trusty goat for a showdown with Big Bad Bart and his gang of bandits (please note that there are no guns in the show).

“The Legend of the Banana Kid” features 20 of Frogtown Mountain Puppeteers’ hand-crafted glove, mouth and rod puppets, and a slew of flying and twirling styrofoam bananas. It’s a hilarious show for all ages, best for kids ages 4 and up.

Frogtown Mountain Puppeteers is a puppetry troupe based in Bar Harbor, Maine, and comprised of three siblings: brothers Erik and Brian Torbeck and sister Robin (Torbeck) Erlandsen. Founded in 2000, Frogtown Mountain Puppeteers has performed at festivals, schools, libraries and theatres in the United States and Canada. They write and create all the shows they perform and have received three Citations of Excellence from UNIMA-USA, the highest national award in puppetry.

The company returns to Symphony Space on Satuday, November 10th for two performances of their hilarious puppet musical, ‘The Legend of the Banana Kid.” Symphony Space is promising a kid-friendly Wild West story complete with flying bananas. This show is part of the weekly Just Kidding series at Symphony Space, and tickets are available now at https://www.symphonyspace.org/events/type/just-kidding.

Recently, Robin Erlandsen discussed this play and their plans for the future:

Meagan Meehan (MM): How did you initially get interested in puppets and how did that lead to a lifelong career?

Robin Erlandsen (RE): Erik took a college class in puppetry from Andrew and Bonnie Periale of Perry Alley Theatre. After graduation, in an effort to make some money (and not get jobs) Brian and Erik started making puppets to sell at craft fairs. Then, thinking it would be more fun to perform, they were hired by the Pennsylvania Renaissance Faire to perform a puppet show for children. Robin joined them, and after she graduated from college they created and performed “The Headless Horseman of Sleepy Hollow” in 2000. It was the first full-length show that incorporated all three siblings. A teacher saw our show and invited us to her school, a librarian invited us to her library, and more invitations kept coming over the next few years. After about 5 years we realized that we could perform full-time.

MM: How did you come up with the plot for “The Legend of the Banana Kid”?

RE: The plot of “The Legend of the Banana Kid” was inspired by classic Westerns we had seen as children. Our dad was our official consultant as we refreshed our memories. We didn’t want there to be any guns in the show, so instead we had our protagonist carry an array of trick bananas.

MM: What inspires your shows and do you write the storyline and then fit the songs into it?

RE: Our show themes often come out of our conversations. Any time we get ideas we write them down, and once we have a number of ideas pointing in a certain direction, we follow it. Certain genres are really well suited for puppetry, such as cowboys or pirates, and kids are already fascinated by these themes so they seem like good material to cover. Our next show is a dinosaur-themed musical. For most of our shows we write the dialogue first and then add music later to add flavor and cover transitions. For the dinosaur musical, we had to structure the story in a way that would let us insert songs into the story. We have 12 original songs in the show which will be sung live.

MM: What do you think audiences will most enjoy about the show and what’s your favorite thing about it?

RE: Our favorite thing is performing this show in front of a live audience!  Many audience members tell us they enjoy the humor in our shows, and we definitely try to create shows that will bring laughs from all ages.

MM: What do you most enjoy about playing for NYC audiences and how many places do you perform at overall?

RE: NYC audiences typically have a real appreciation of theater so receiving positive feedback from an audience that has been exposed to great variety of theater is always a honor.  We typically do about 140 shows a year, the majority in New England, but we have done tours down to Florida, Arizona, and Canada.

MM: What are some of the most memorable stories you have about being a puppeteer?

RE: One of our most memorable experiences was performing in front of fellow puppeteers at the Puppeteers of America National Festival.

RE: Right now, one of our big goals is to finish our Dinosaur Musical.  We are hoping to debut it next year.  Also, we have created a tv pilot episode of an environmental themed kids show called “Up On Frogtown Mountain”.  To see on YouTube click here. The first episode is about recycling, but we would love to make more episodes.

RE: If you have an interest in theater, puppetry is a great way to pursue it!

For more information about the show, please visit: http://www.frogtownpuppets.com/the-legend-of-the-banana-kid.html