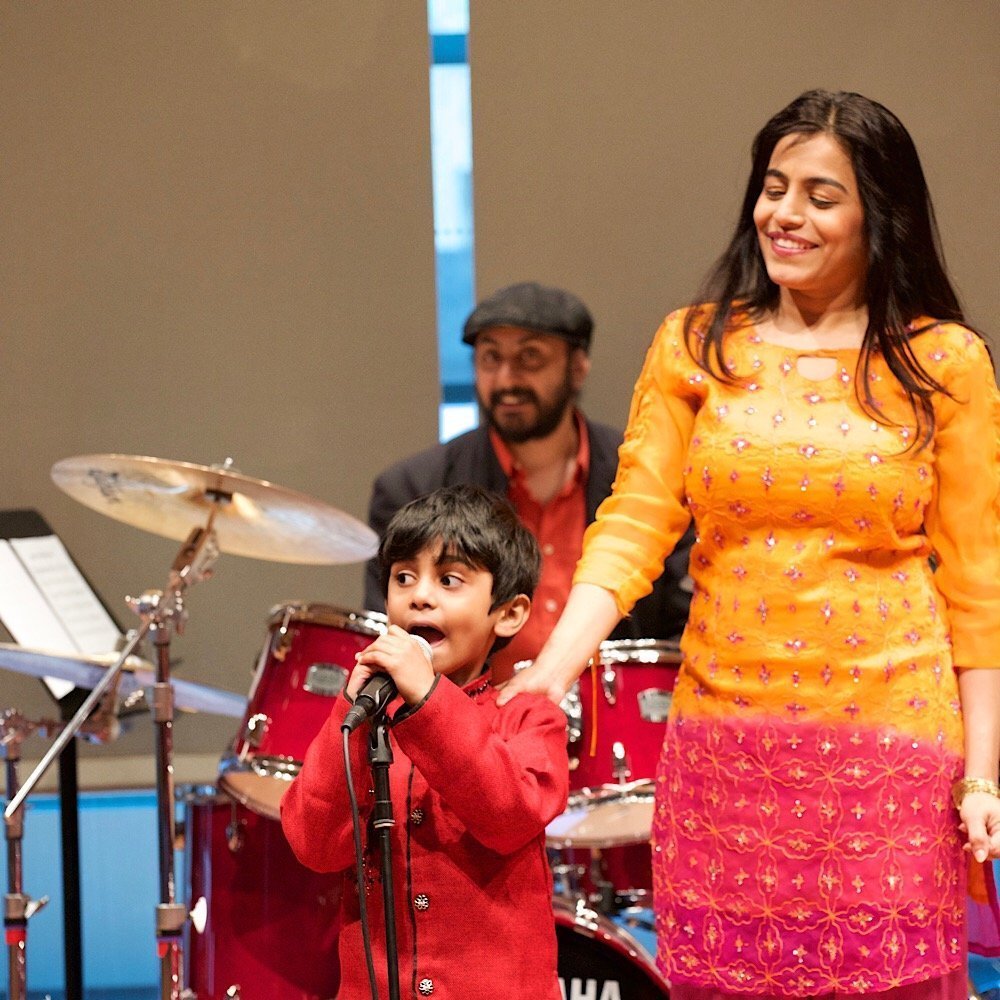 Falu’s Bazaar is a vibrant and diverse new album of Indian children’s music from NYC’s own Falu Shah, an international artist known for her unique blending of modern and classical stylings. This playful yet educational collection is the first of its kind, teaching South Asian culture through a spirited presentation to today’s youth in three languages- English, Hindi and Gujarati.

Falu recently granted an exclusive interview to Kidskintha where she discussed her incredible band, her musical journey around the globe, instruments, languages, sights, the humanity of a diverse world, and more.

Meagan Meehan (MM): How did you initially get interested in music and how did you break into the scene?

Falu Shah: I was born in a musical family so I started learning music at a very young age of three and finished my masters in Indian Classical Music. Growing up music was in my blood so there was no escape for me to learn anything else but music. Once I got to America I started a band and started making music and creating new genres like Indie Hindi. My second album “Foras Road” fell into the category of World Music and the third album was Falu’s Bazaar that I made keeping families and children in mind. I was lucky enough to collaborate with amazing musicians like Wyclef Jean, Philip Glass, Yo-Yo Ma, A.R. Rahman, Blues Traveler and Ricky Martin amongst others. It has been a very long musical journey and I look forward to writing and creating more and more music in the coming future.

MM: Do you write more songs in English or Hindi and what are the challenges of working with both languages?

Falu Shah: Fortunately, I speak five languages fluently and that is why to me writing in different languages is relatively easy. I sometimes write an entire song in English or Hindi and then sometimes I automatically write in more than two languages. I don’t stop creativity when it is flowing in any language. Once I finish writing than I look at the paper and see oh I wrote this song in English, or Gujarati, or Hindi or Marathi or Sanskrit. To me analyzing my song comes later on, first I just create with all my heart and then see what I came up with. I don’t see a challenge in working in more than one language at all. It’s a matter of just putting the two languages together where it becomes a natural flowing composition and a brilliant song. Feelings are something I focus on more while creating music.

MM: How did your son influence your songwriting? What other things inspire you?

Falu Shah: My son’s curiosity and his questions inspired me to make this children’s album Falu’s Bazaar. For instance, when my son, Nishaad, came back from school, he asked me: “Mom, why is our food sometimes yellow? Why do we speak a different language at home? What are the names of these pots and pans that are found in our kitchen? How do we count numbers in our language?” All of these questions inspired me to think about creating something musical for children that would be educational and fun. After working on the songs for two years we were able to finally record, mix and master the album last year to be released this year. I wanted to give my son a sense of identity in this country through music and that was one of the underlying factors and purpose of why I made this album.

MM: How did you come up with the songs on your latest album?

Falu Shah: I looked at everything children were playing within the age group from two to eight years and studied their passion first. Then I listed subjects that were interesting for children and started writing on those subjects. Some of this became prose and some became songs in this album.

MM: Did you intentionally write this album in a way that even non-Hindi speakers can understand and enjoy?

Falu Shah: I wanted to attract all sorts of children not just South Asian kids so I wrote all the songs in English and Hindi so even a non-Hindi speaker can listen to it and understand what I am singing about. I wanted this album to have a universal appeal.

MM: What kind of feedback have you gotten?

Falu Shah: Interestingly the feedback we have been receiving until now is 100% positive which tells me that there is a lot of demand for something like this in the market as parents are looking for diversity in their children’s lives.

MM: What can people expect from the album and your concerts?

Falu Shah: Both parents and children can enjoy this music as we have elements in the album that appeal to both children and parents. For instance, parents can appreciate the nuances that are integrated into the songs even though they are written for kids, like improvisational elements in the songs, different odd rhythm cycles and multiple languages – kids can enjoy the beat and catchy melodies that they can sing along with the album.

Falu Shah: To create a sense of identity for South Asian kids in the world, In and outside of India, as well as share our rich tradition and culture with non-South Asian families.
MM: Is there anything else that you would like to mention?

Falu Shah: I would love to perform two different shows at one venue in the near future – Falu’s Bazaar show in the afternoon for families and children and Falu band show in the evening as I have the same musicians

Soul Proprietorship: A Unique Community For The Rising Tribe Of Single Parents

Conrad Challenge: This Power Duo From India Stood Out With The PowerCycle Idea!