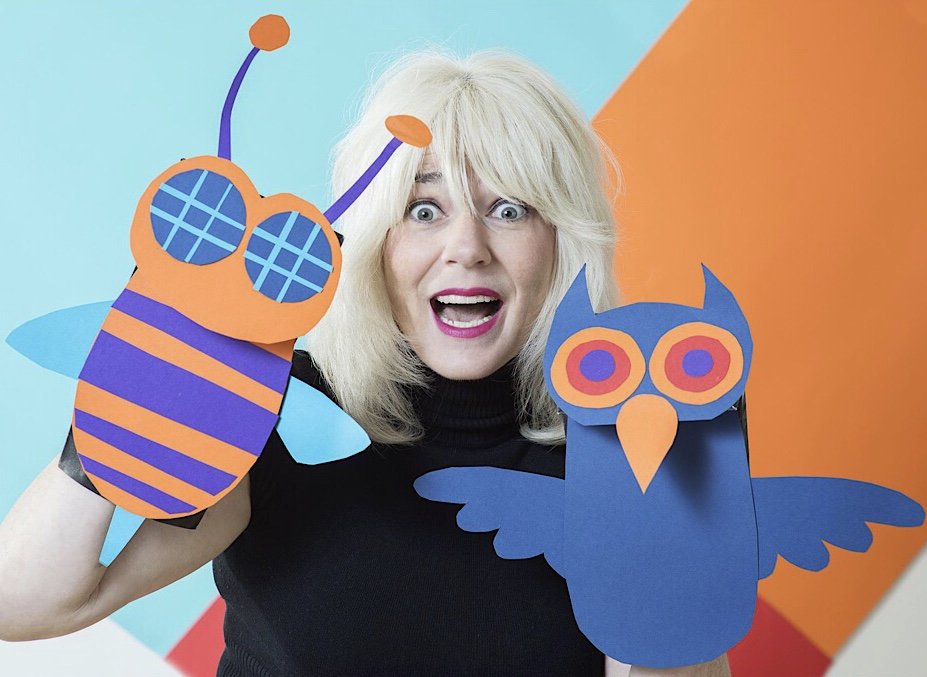 Esther Crow is a singer, songwriter, kids’ entertainer, teacher, care-giver, and sometimes-actor, who lives on the Upper West Side of Manhattan, in the very apartment she grew up in, with her husband, her 5-year-old son, and her mother. After almost two decades in the 9-5 work force, Esther turned to music full time in 2013.

The songs came to Esther quickly, and she assembled a band of wonderful local musicians and singers. This was the birth of Thunder and Sunshine. Esther received an award of excellence for her songwriting from the Film Advisory Board in November, 2017, and has since played gigs at many venues.

Since October, 2016, I’ve been a guest reader at the Bank Street Book Store at their 10:30 a.m. story hour. Esther loves reading to kids in a very animated fashion while incorporating original songs and hand-made puppets (by the inimitable artist, Jeff Lewonczyk).

Esther loves to incorporate various sounds and genres in her music, especially that which she writes especially for children. In 2007 she and her husband, Dan Crow, founded The Electric Mess, a rock band, with friend and bass-player, Derek Davidson.

Esther’s most recent endeavor is promoting the new video for her song “The Letter Z.” In a recent interview, Esther discussed her career, her new song, and more.

Meagan Meehan (MM): How did you initially get interested in music and acting and which love came first?

Esther Crow (EC): Though I was in a cover band in college, after college, I largely left music behind and focused on improvisational acting. I moved to San Francisco and was active with Bay Area Theater Sports. From there, I eventually moved onto sketch comedy, standup comedy, wrote and produced two one-woman shows, tried my hand at commercial acting, took some “serious” acting classes…all before jumping ship and switching to music! (I still act, here and there). I guess I always wanted to be a comedic actor, first and foremost. And though my main focus is now music, I always incorporate some humor- especially through my puppets, with the kid’s music. They each have their own personalities, and it’s a lot of fun!

MM: You grew up in Manhattan, so how did that musical melting pot influence the creation of your defining sound?

EC: I feel extremely fortunate because I was exposed to a ton of different genres, at a young age. Both of my parents were classical musicians, and my mom also loved jazz and played a lot of that in the house growing up. But I fell in love with both rock, and disco, and was a total MTV child, much to my parent’s chagrin! I devoured all those music videos and still feel very influenced by the music of the 60’s, 70’s and 80’s, primarily.

MM: What inspires your songs and do you typically write lyrics or melodies first? Also, what prompted you to focus on music for kids?

EC: This is very cliche, but most of my songs for kids (“Thunder & Sunshine,” and also my solo material) seem to be about animals! I’m also inspired by what it is that little kids need to learn: numbers, alphabet, left and right. Trying to find musically interesting ways to introduce these things to kids can be a fun challenge. For “The Electric Mess”- what I call my “adult rock band”- politics and end-of-times seem to be some main themes! Melodies often come first. Lyrics sometimes tend to be a chore for me. But the magic happens when both seem to hit you at the same time. I started writing material for kids, about four years ago, shortly after the birth of my son. Hearing what was already out there for kids inspired me to write my own songs.

MM: You are also an actress and a writer. So, what inspires you to write plays and what sort of acting roles do you like to take on? Essentially, what sorts of characters would be your dream roles?

EC: This will be a short answer, as I’m fairly far removed from acting at this point. Suffice it to say: Carol Burnett is my absolute idol, and it would be a dream come true to have my own variety show where I could play/sing music, and also play a bunch of wacky characters.

MM: You have said that you like to read to children and include music and puppetry in those readings…so how did you get into that?

EC: Bank Street Book store is directly below from where I live (same building!), and I used to take my son to their story hours. Eventually, I got to know the staff and asked if I could be a guest reader. I used to do it once a week, but now I do once a month. I honed my act, so to speak, at Bank Street, and continue to do so. And now I’m branching out to other stores and venues, which is great.

MM: You have some steady gigs reading, singing to, and generally interacting with kids at venues like the Bank Street Book Store and Sunnyside Plays. So how did you secure those venues?

EC: I asked Bank Street (as stated above), but then some spaces, like Sunnyside Plays in Queens, and Edamama in Brooklyn, found me, through word of mouth and also those parent email lists, which are useful!

EC: “The Letter Z” is definitely a crowd- and personal- favorite, and we recently made a really fun video for it. I also wrote a rap about a monster in a closet, and we’re making a video for that right now. Of my acoustic guitar songs, “Hey Johnny” (or “Johnny the Cat”) seems to be very popular, since it’s also a game of sorts: I ask the kids to shake instruments only when I’m playing guitar, and there’s a lot of tension and playfulness, throughout the song. It’s so fun to see the kid’s reactions and anticipation.

EC: I’d have to say: not only is it very flattering when kids get to know my songs, and sing along, but when the NANNIES are fans (and the parents, of course). I have some theme songs for my puppets, and one nanny always sings along to Bernie the Bee’s theme. It’s hilarious!

MM: Your husband also helps you out creatively and you even formed a band together! So, what’s it like to be a business partner with your spouse?

EC: My husband and I formed a band (with our friend, bassist Derek Davidson) called The Electric Mess in 2007. We both write songs, along with Derek, for that project. Surprisingly, we haven’t hit too many bumps in the road and work very well together. We usually write songs independently, but sometimes help each other if we’re stuck. So, a few of our songs have both our names attached to them. For my kid’s material, however, I write totally independently, both for my solo songs, and for “Thunder & Sunshine.”

MM: You have a song out now called “The Letter Z” so why did you pick that particular letter and will you also make songs for the other 25 letters?

EC: You know, I’m not sure why I picked Z…I probably thought it’d be good fodder for some fun words, and that turned out to be true! That’s actually a fun idea: to write songs for all the letters. No plan for that yet, but you never know! Could be a double concept album!

MM: The song contains elements of many genres of music—R&B, calypso, Jazz, and even some rap…so how did you mix all these melodies together to come up with such a catchy tune?

EC: Thanks for your nice words- I have to give a huge shout out to the very talented musicians in Thunder & Sunshine for helping this song come alive with all the elements! My vision for the song was definitely to have a calypso vibe. But when you bring in a demo, it’s hard to relay that because it’s usually just acoustic guitar and a vocal. You have to describe the feel that you want, and hopefully the musicians will get it and help paint the full picture. I’m very lucky these guys and gals got it right away!

MM: The music video for “The Letter Z” is adorable, so what was the filming and editing process like? Of all your music videos, have you a favorite?

EC: Thank you! We only have two official videos out: “The Letter Z” and “Jack & Jill.” I love them both, but Z is probably tops for me. Jeff Lewonczyk drew all the images, and Derek Davidson (also our bass player!) shot and edited it, with the help of Anna Ablogina and Nick Anderson. We shot the band members against a green screen, and then Derek incorporated Jeff’s drawings while editing. It was a painstaking process, I’m sure, but Derek makes it all look so easy!

MM: Overall, what are your biggest goals for the future of your career?

EC: I just love the process of writing music most of all. Performing and teaching classes is satisfying, but nothing satisfies me more than the act of creating. I’m pondering doing more on YouTube- perhaps a children’s series of some kind, that incorporates both music and comedy, for kids. And also recording a solo album for kids, as well as a 5th album with The Electric Mess. But yeah, the biggest goal would be to get a series off the ground.

EC: I’d love it if you and all your readers would subscribe to our YouTube channel, as there will be more videos to share in the near future! (As well as my impending series). And if anyone is in the NY area on Halloween Day, please come to Hippo Playground (92nd Street, in Riverside Park) and see the ladies of Thunder & Sunshine LIVE, at 4pm! Subscribe here: https://www.youtube.com/channel/UClcsF9hyCtH4OUdi0jpDGZg?view_as=subscriber

To learn more about Esther Crow, visit her official website. To watch a video of “The Letter Z,” see here.