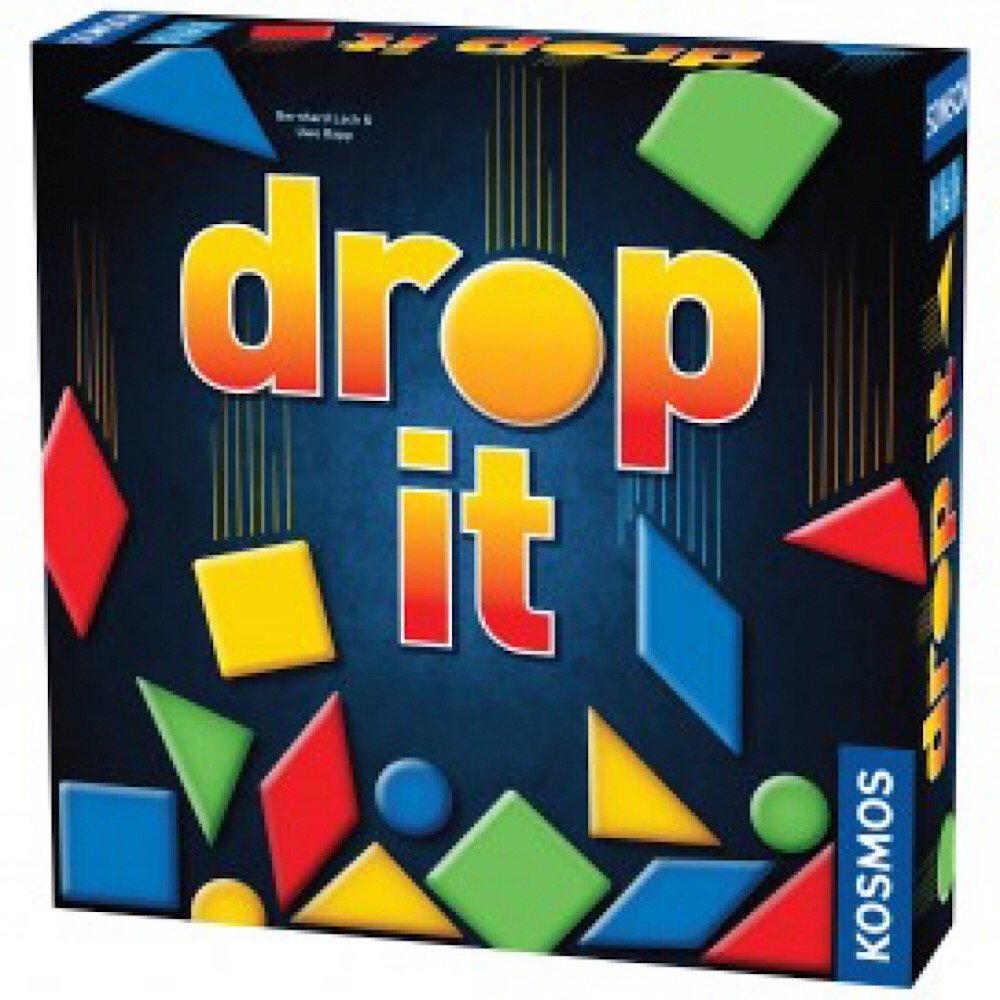 KOSMOS is running a giveaway with us for this game.  Enter HERE!

“Drop It” is a fun and surprisingly challenging new board game by Thames & Kosmos which was invented by game design team Uwe Rapp and Bernhard Lach. Both family-men and professionals hailing from Germany, Uwe and Bernhard met at the Marbach chess club and have known one another for over twenty-five years. With their game ideas developed as a team, as a counterbalance to their more contemplative games of chess, they always look for simple but clever game concepts with an emphasis on fun.

Recently, both men granted an exclusive interview where they discussed their experiences designing games and their hopes for the future.

Meagan Meehan (MM): When did you first realize you had a talent for creating games and how

did you end up working together?

Uwe Rapp & Bernhard Lach (UR & BL): Both of us have been playing chess, the ‘royal game’, in chess clubs since our youth. But we also enjoyed playing parlour games like ‘Settlers of Catan’ or ‘Risk’ with our families and our circle of friends. At a party in 2000, in the spur of the moment, we came up with the idea to develop a board game ourselves. The subject was winegrowing since we live in southern Germany in a region shaped by viticulture. That’s how our game ‘Winzerkönig’ came into being. As we designed the game, we quickly recognized the benefit of the exchange of ideas between the two of us. It was and is also very helpful when everybody contributes to the design of a game with their own particular strengths. Teamwork promotes faster and better design. Though the publishing houses we contacted definitely showed interest in ‘Winzerkönig’, it was never published. But the joy of designing a game stayed with us and fueled the ambition to one day publish a game.

MM: How many games do you currently have on the market and how did you initially

break into the industry?

UR & BL: After ‘Winzerkönig’ we quickly came up with new game concepts and presented them at game designer meetings as well as to the editors of publishing houses at trade fairs. After some trial and error, we finally succeeded in 2003 with ‘Froschkönig’ and published our first game with the publisher Zoch. The game even made it onto the ‘recommended’ list for game of the year. That was an enormous boost. ‘Froschkönig’ had a simple but original play mechanism (please find a video presentation of the game from 2016, https://www.youtube.com/watch?v=EAxv132l8gM )To this day we try to follow the same principle when we develop new games.

Altogether we have now published 42 games. Some of them are geography games, based on a uniform/consistent play mechanism. Some of them are designed for particular countries and thus have only been published there. One of them, ‘Map it’, has been published in the USA. Apart from that, we have developed many different games over the past years (‘Qwinto’, ‘Kreuzwort’, ‘Schüttel´s’). At the moment there are a good 10 of our games on the market. All our games are listed in detail on our homepage http://www.klarspieler.de .

MM: ‘Drop it’ looks simple … but it´s actually really challenging! How long did it take you to design and come up with all the rules?

UR & BL: It may come as a surprise but the development of ‘Drop it’ happened very quickly. While playing around with colored flat wooden plates in the beginning of 2016, the basic idea was born, that is to say to drop the small wooden pieces into a slot while following taboo rules. After just a few days we had handcrafted a first very playable prototype. The rest of the details, especially the gaining of points, were quickly solved to our satisfaction. The rules of the game were developed within a month and we were able to start looking for a publisher to whom we could present the game.

MM: What do you think are the most fun – and most challenging – aspects of this game?

UR & BL: Time and again it is amusing to watch which surprising twists and turns the wooden pieces take, outcomes the player could not have foreseen when dropping his piece into the slot. Consequently, big points that were not expected can be very surprising, or the other way around: a seemingly safe drop goes awry. That is precisely what makes the game so emotional and so charming. It is also fun when two teams compete and lively discussions erupt about how each piece should be dropped. The challenge of the game is not primarily dexterity. At the start there is always a kind of calculation: Which piece do I drop onto which spot to make the most points? Strategic considerations are an appealing challenge too: which shapes do the other players have and how can I make their successful drop more difficult?

KOSMOS is running a giveaway with us for this game.  Enter HERE!

MM: How did you get Kosmos to pick it up?

UR & BL: Even before ‘Drop it,’ working with Kosmos was a very positive experience. Last time we worked together on ‘Kreuzwort’, a word game that has been on the market for five successful years now. We also knew that the production of a slot for ‘Drop it’ was a real challenge. We were sure that Kosmos, because of their long experience in the manufacture of experimental boxes, had the necessary know-how.

MM: How different did the prototype look from the final product?

UR & BL: The first playable prototype which we had already put together one week after the design of the basic concept for the game looked very similar to the final product. The later prototype, which we presented to Kosmos, already had the slanted lines for the different levels and also the bonus circles, even though they were still all the same size. Further into the design process, we changed the unitized bonus circles into three different sizes with varying point values. Last but not least the editor Michael Sieber-Baskal had the idea to make the taboos on the margins and at the base flexible. Thus the game could be outfitted with the colourful stripes on the margins as a variation. In addition, the idea to add jokers as an option developed while working on the game with the publisher.

MM: What kinds of feedback have you gotten from players?

UR & BL: In numerous tests, we have received nothing but good to excellent feedback. We keep hearing that the game attracts the attention of onlookers and has a wow-effect, that the rules are simple and the duration of the game is pleasant, that it is full of suspense to the very end and that it is not only suitable for people with fine motor skills but for people with gross motor skills as well.

MM: What do you most enjoy about being a game designer?

UR & BL: We particularly enjoy bringing people together in play, not only within the family or a circle of friends, but also strangers and make them forget their daily worries, relax, and simply be happy for the duration of the game.

MM: Are you currently working on any other exciting projects?

UR & BL: A game like ‘Drop it’ is truly a highlight for us and very close to our idea of the perfect game. But of course, we keep working on other interesting projects. At the moment we have five prototypes with different publishers and we are very curious how many will make it onto the market.

MM: Is there anything else you would like to mention?

UR & BL: We think it is fantastic to have the chance to design games in our day and age. Never before has the interest in board games been as widespread as it is today. We hope this trend will last for many years to come.

KOSMOS is running a giveaway with us for this game.  Check it out!

Review: Blackboard by Boogie Board