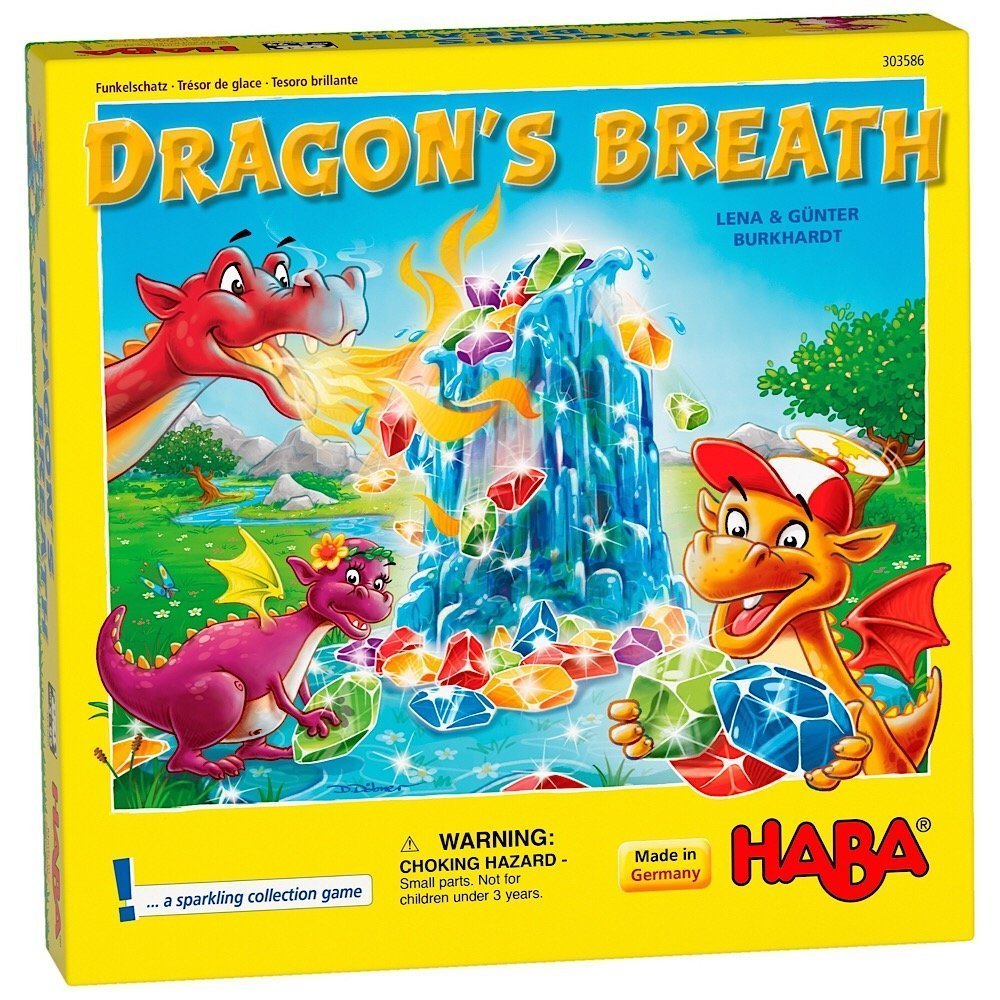 “Dragon’s Breath” is a new board game by HABA that features a unique design and a unique style of gameplay. According to the official description:

The dragon children have found an unusual treasure: a column of ice with sparkling stones frozen inside it. Naturally everyone wants them. Together with dragon dad the players remove one ice-ring after the other and melt the ice column. This makes the sparkling stones fall down. But be careful: Only certain sparkling stones can be collected. Who will have the most sparkling stones at the end? This game is intended for people ages five and older.

Moreover, the game is special in that is was designed by a twenty-one-year-old student named Lena Burkhardt who is studying mathematics and French in Freiburg to become a teacher. She has three passions: Travelling around the world, teaching kids and playing games. As the daughter of a game designer she was born with dice, cards and tokens in her hands.

Recently, Lena and Antje Gleichmann–who is the person at HABA who selects games and works with the designers–spoke about “Dragon’s Breath” and the responses it has garnered.

Meagan Meehan (MM): How did you initially get interested in designing games and how did you come up with “Dragon’s Breath”?

Lena Burkhardt (LB): My whole life I have been playing games with my friends and family and still do. My favorites are games with a strategic approach that don’t take too long to explain. Since my father is a game designer himself I am used to testing all of his games. When my father showed me one of his new game ideas some years ago, the idea of “Dragon’s Breath” sprang into my head. My father left the game, which consisted of a lot of different materials on the table to make some coffee. I quickly began to play around with the woodwork on the table. I realized it was fun to stack the wooden rings together and to put small bricks into them. Now the difficulty was to remove the rings one by one without making the bricks fall down. From this key experience, my father and I developed the game we later were happy to be able to publish.

MM: What is it about dragons that so appeals to you?

Antje Gleichmann (AG): In the prototype version, the column of ice was a cauldron that consisted of wooden rings filled with gems. The game’s story of a shrinking cauldron didn’t feel very convincing to us. Since the wooden rings were later replaced by rings made of plastic, we came up with the idea that they could be rings of ice. And so, one thing led to another, ice rings can be “melted” and what could be better suited to do this than a dragon? It’s a happy coincidence that children love dragons!

MM: What were the challenges of developing this product, such as making the little rings and gems and Daddy Dragon figurine?

AG: As for wooden pieces, this is a field where we have many years of experience. The sparkling stones, too, have been used in previous HABA games, so we were in touch with a supplier that specializes in making these. Therefore, these two elements did not prove particularly challenging. The rings that in the beginning were made of wood were a different matter, though. Wood is a natural material that is said to constantly ‘work’, meaning that it can deform and warp. The game however relies on the rings’ ability to be stacked to form a sturdy tower. Using wooden rings, we felt that the risk of the tower not being sturdy enough was too high. That’s why we eventually decided to go with rings made of plastic. Synthetic materials are great because they are extremely versatile in their application. Still, the supplier faced the challenge of producing rings that were entirely identical and, above all, straight: A sturdy tower can only be stacked up if the rings are even and flush. This was a challenge that we and the supplier overcame.

MM: How did you think of the great idea of using the box as part of the game that can double as a play set?

AG: In the beginning, there was a board on which wizards advanced according to the sparkling stones that dropped. As the wizards were eventually eliminated, the element of collecting sparkling stones came into play. The question of where to keep the stones each player had collected soon came up, and so the idea of incorporating the box in the game emerged. Collecting the sparkling stones in the dragons’ caves below the board also provides suspense until the end of the game, and the stones’ disappearing into the dragon dad’s cave has an appeal of its own.

MM: How did you shop this around and get HABA to pick it up?

LB: I presented my prototype to HABA and we played it together. I think the fact that I was convinced of my own game persuaded the editor to test it in their test rounds with children and families.

MM: What is your favorite thing about the game and its play-pattern, aka rules?

LB: I love the visual components of the game. It is always fun to watch the sparkling diamonds fall down. In my experience, children especially like this aspect of the game. I like that everybody is involved in every turn because even when it’s not your turn you are interested in the number and color of the falling diamonds.

MM: What kind of feedback have you gotten regarding this game?

LB: I got a lot of positive feedback from families and children because the parents enjoy playing the game with their kids as well as children among each other. When I play the game with my friends we often laugh a lot and have fun.

AG: We as the publisher also receive consistently positive feedback on this game. Children and families simply love it!

MM: What other games have you created?

LB: With some help from my father, I “created “Die Gärten von Versailles.” It’s a family game that was published in 2017.

LB: At the moment I’m studying, that’s why I don’t live with my parents anymore. But every time I’m at home to visit them, I test my father’s games and we often have some new ideas together. Right now, we have a prototype, “Tempo große Bären”, that we are working on.