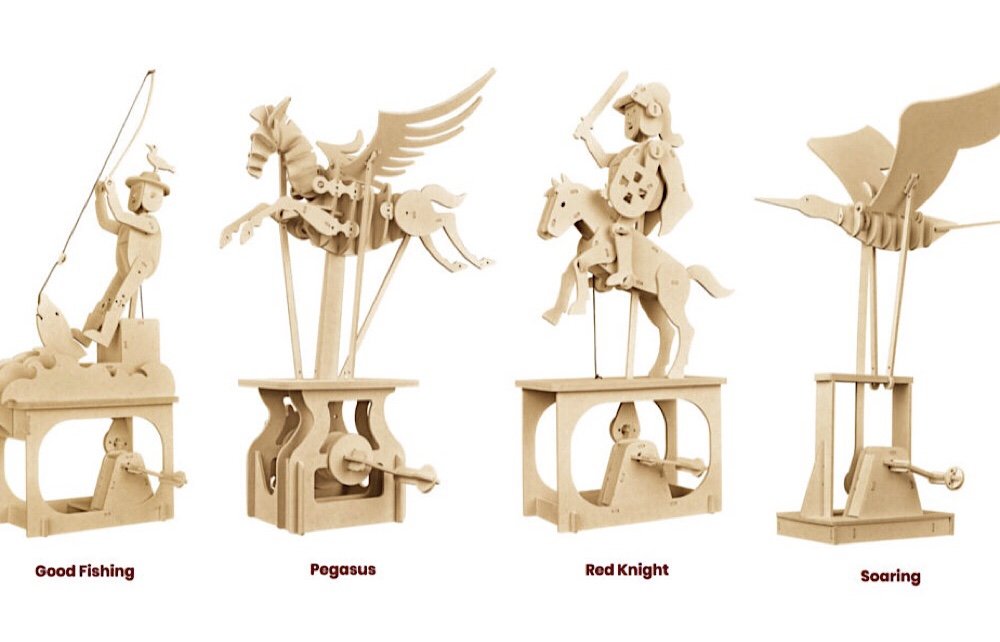 Clockwork Dreams is a toy company whose mission is to make high-quality mechanical automata toys available to a wide-spread audience. The toys are designed by master artists from Europe and around the world.  Clockwork Dreams hopes to bring kids a creative alternative to online games, to engage kids and adults in S.T.E.A.M. (science, technology, engineering, art, math) activities that promote engineering and creativity, and provide educational toys that are fun and artistic.  It also hopes to increase public awareness and interest in the intricate artistic and mechanical design of automata, and to revisit the steampunk movement.

Recently, one of the primary automata designers, Keith Newstead from the U.K., granted an exclusive interview where he discussed his process of designing toys.

Meagan Meehan (MM): How did you initially get interested in becoming a designer and how did you find your way into toys?

Keith Newstead (KN): I count my childhood memories of the machines in the Penny Arcade at Southend as being one of the most important influences on my work. When a penny was inserted, a little scene would be automatically played out, and I was fascinated as to how these machines worked. At the time I did not know that they were called automata (a machine that imitates life).

After studying graphic design at Essex University, I worked in an art studio in Newcastle, but left after only six weeks of suffering from extreme boredom because nothing moved, and I liked the idea of graphic art moving.  I tried animation, but that was really time consuming.  I travelled to Finland and took a job delivering newspapers, but since the temperature was minus 20 degrees, I came back to the U.K. to find warmer employment, and became a motorcycle dispatch rider.

During this time, I started to make and sell jewelry.  Later, I saw a TV program about automata and automata makers David Secrett and the late Sam Smith.  My early fascination with these machines flooded back to me. I found the mixture of art, craft, graphics and movement very exciting and it wasn’t long before I made my first piece.  I took it to a shop in London called ‘Cabaret Mechanical Theatre,’ which specialized in modern automata and is now sadly closed. The owner, the legendary Sue Jackson, said she liked it and would try to sell it for me.  It sold in a few days, and it wasn’t long before I was successfully selling my work there.

MM: What are the challenges of being a professional designer for Clockwork Dreams?

KN:  Before I entered the field of automata, it took 10 years to acquire the skills necessary to produce automata successfully.

As a designer, sometimes when I get a new commission and people give me a theme, sometimes I can’t think of anything. And I don’t do that thing of saying, “OK I need to sit down and have an idea,” because that’s a waste of time. In that case I would just sit there all day.

I don’t think about it, instead I just forget it. Then gradually when I’m not thinking about it, little ideas will suddenly come into my head, or I might have a dream, a little starting point, and then I start doing some drawing and working out some ideas.

MM: Do you typically create your own designs or make what you’ve been asked to create?

KN: All my work is original design, and many are by commission.  When I design a new piece, the first thing I think about is the story. Will it be funny with a surprise at the end, or serious?  Sometimes I am inspired by a simple mechanical movement and whole automaton will grow around it. At other times I may be inspired by the work of other artists.  I love to experiment with new styles and materials and to find new ways of creating movement. I never aim my work at a particular age group, and it makes me happy that both children and adults enjoy my work.

MM: Clockwork Dreams is such a cool company, how did you find out about it and come to work with them?

MM: Overall, what are your biggest goals for the future of your design career?

KN:  One of my goals has been to get into the film world. Now that computer generated effects are so perfect, it’s a good time to go back to something more simple and hand-made, such as automata.

I was recently able to achieve my ambition to work on a film. I worked with my friend Robb Higgs to construct a life-size clockwork man for the 2013 Warner Bros. film titled “The Best Offer”!

My work is on display at various art galleries and museums around the world, such as The Natural History Museum and The National Portrait Gallery and I have also sold over one million card automata kits at The Tower of London.