Skip to Content
Home / In the Media SpotLight / Card Games: Pluck Off! For A Parody Of City Life 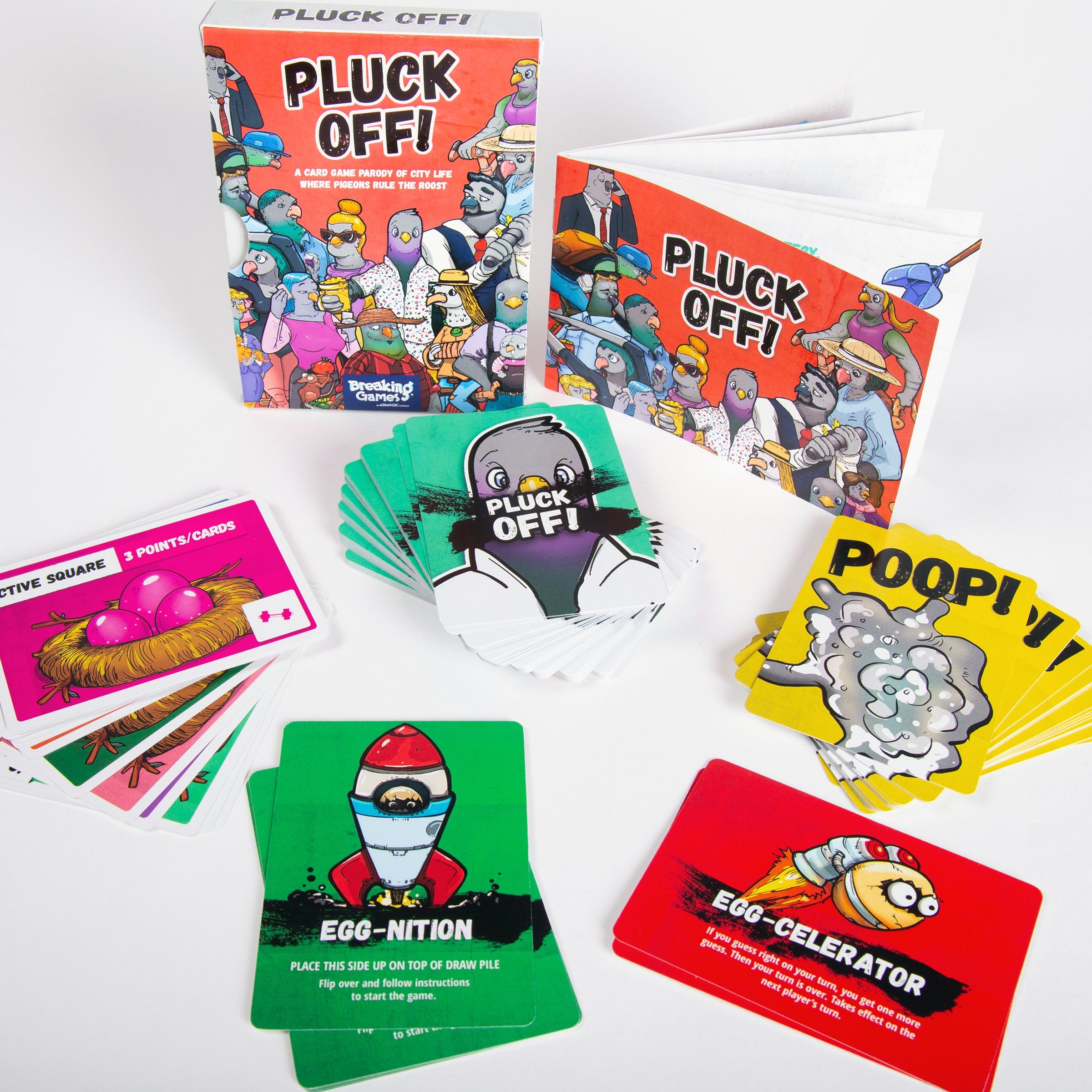 “Pluck Off” is a hilarious new card game created by the Brooklyn-based married-couple Emily and Matthew Escovar, founders of OtterLabs LLC. “Pluck Off!” is published by Breaking Games after a successful pitch at a trade show. This $20 party card game for 3-6 players aged 17 and older is a parody of city life in a world run by pigeons. Due to high rent, each pigeon must find a nestmate that compliments their individual character and personality. Finding the right roommate while avoiding Urban Vermin like Panhandler Possums and Pizza Rats is the goal of this zany and fun game.

Recently, husband and wife team Emily and Matthew Escovar discussed their experiences designing this game and working together as a unit.

Meagan Meehan (MM): How did you initially get inspired to design games and how did you forge a path in the toy industry?

Emily: We got into designing games a bit by accident. It all started with a throw pillow that Matthew’s mom gave him for his birthday. Because we live in NYC, she thought this pillow – with stitched images of the Brooklyn Bridge, a taxicab, the Statue of Liberty and a red-eyed pigeon – embodied everything about the city. We thought it was ugly, and joked that it would be better if it was just a pigeon on the pillow. To up the ante, maybe even a pigeon dressed like a hipster. And that’s how we got the idea for pigeons dressed as people.

Matthew: Taking it one step further, after a few failed attempts at drawing her own pigeons, Emily started writing back stories for different city pigeon personalities in the form of limericks. She sort of got carried away with it and ended up writing more than 80 limericks, each about a different character. Emily’s original idea was to make a book out of the pigeons, but Matthew thought it would be better to make the pigeons into a game. And then our journey began!

MM: How did you come up with the concept for “Pluck Off!” and why did you select pigeons to be the card characters?

Emily: We’ve lived in NYC for more than 10 years now, and the card characters came out of inspiration from people we’ve known and seen throughout the years. Some of the characters, like taxi driver pigeon, are staples of city life and we felt they ought to be included. Others, like hipster pigeon, are a more recent cultural phenomenon that defines certain neighborhoods in every city. Most importantly, we wanted everyone to be able to find themselves or see someone they know in a pigeon and be able to find the humor in them.

MM: These cards are really funny and each pigeon has such a personality! So, which characters/cards are the most memorable to you and why?

Emily: Fireman pigeon was the first pigeon and is still one of our favorites. To us, he’s kind of a Staten Island tough guy who’s overly macho but might not realize he’s attractive to a different kind of flock.

Matthew: Instagram pigeon is another of our favorites. She was inspired by a real-life story of someone whose apartment was broken into while she was on vacation and posting about her trip to Instagram. Despite the outcome, she is still posting on Instagram as far as we know.

MM: Given the number of characters and detailed MOs for each one, how long did this game take you to complete from start to finish?

Emily: The game took about a year and a half to develop, and then another year to get published. Funnily enough, the character creation was the easiest part of the game. It was the process of developing the game mechanics and balancing it that took the longest. We had a good six-month stretch where we just felt stuck until we had a eureka moment and created the Pigeon Poop mechanic. It really elevated the game, adding a lying element that players love, and another fun catchphrase for players to say besides Pluck Off!

MM: How did you find out about Breaking Games and how did you convince them to publish “Pluck Off”?

Emily: We did our research on game publishers and knew that Breaking Games was all about accessible, fun games that have a bit of an edge. It seemed like a good fit for Pluck Off, because there aren’t too many publishers who will take on a game that sounds a bit offensive (even if the game isn’t). On top of that, if you’re a first-time designer, it can be a bit hard to get your foot in the door with publishers. We talked to a lot of other game designers, and they said the best thing to do is to go where the publishers are and meet them in person. One of the events where that’s possible is GenCon.

Also See: Board Games: A Closer Look At The ‘Something Wicked’ Indoor Board Game

Matthew: We met Shari Spiro at the Breaking Games booth at GenCon in 2019, and she was generous enough to give us a few minutes of her time. Luckily for us, she thought “Pluck Off “was a good fit for Breaking Games too!

MM: On the day that you made your pitch, how different did the cards look from the current finalized version?

Emily: The cards actually look the same! We knew that the artwork and the design of the game were going to be a huge element of it, so we’d already worked with an artist and graphic designer to put the art and cards together. Fortunately, the Breaking Games team like the way the game looks too, so we’ve been able to keep it consistent with our vision.

MM: How many other games have you designed and what are their play patterns?

Emily: This is our first game, so we don’t have anything else under our belt! To us the story of the game is just as important as the mechanics. We are playing around with a few concepts, but whatever we do next will have a fun theme that’s entertaining.

MM: You own your own game studio and are a husband and wife team, so what is it like to work creatively alongside your spouse?

Emily: It’s not always easy. We have very different personalities and work styles, Matthew being the more left-brain side of the couple and Emily being the right-brain side. More often than not we have fun with it, and if we have a disagreement or conflict, we tell each other to Pluck Off! But in all seriousness, it’s important not to taskmaster each other, and when you have a stalemate, take it to objective third parties to see what they think. We’ve resolved more than a few issues by engaging test players and getting their points of view.

MM: To date, what has been the most rewarding part of working as game designers?

Matthew: The gaming community has by far been the best part of this experience. Gamers are such nice and generous people, and we’ve made so many new friends. You won’t find many communities where people are willing to give you hours of their time just to help you improve your dream project, and that’s exactly what happens at conventions and test play sessions. There’s so much passion, dedication, and a true love of the hobby that can’t help but rub off on you!

MM: Where do you hope your career—and creations—will be in ten years?

Matthew: We hope we’ll have another game or two under our belt by then! We just had our first kid in June, and we’re sure that he’ll inspire games that are dedicated to kids and creative learning.

MM: Are there any upcoming events–or impending game releases—that you would like to discuss?

Emily: We have a celebrity expansion pack for “Pluck Off” in the works, and a few other game ideas that we’re playing around with, literally!

To purchase a copy of “Pluck Off” see here.

In the Media SpotLight, Reviews