Skip to Content
Home / In the Media SpotLight / Can You Feel It?: Interview with singer Jessa Campbell 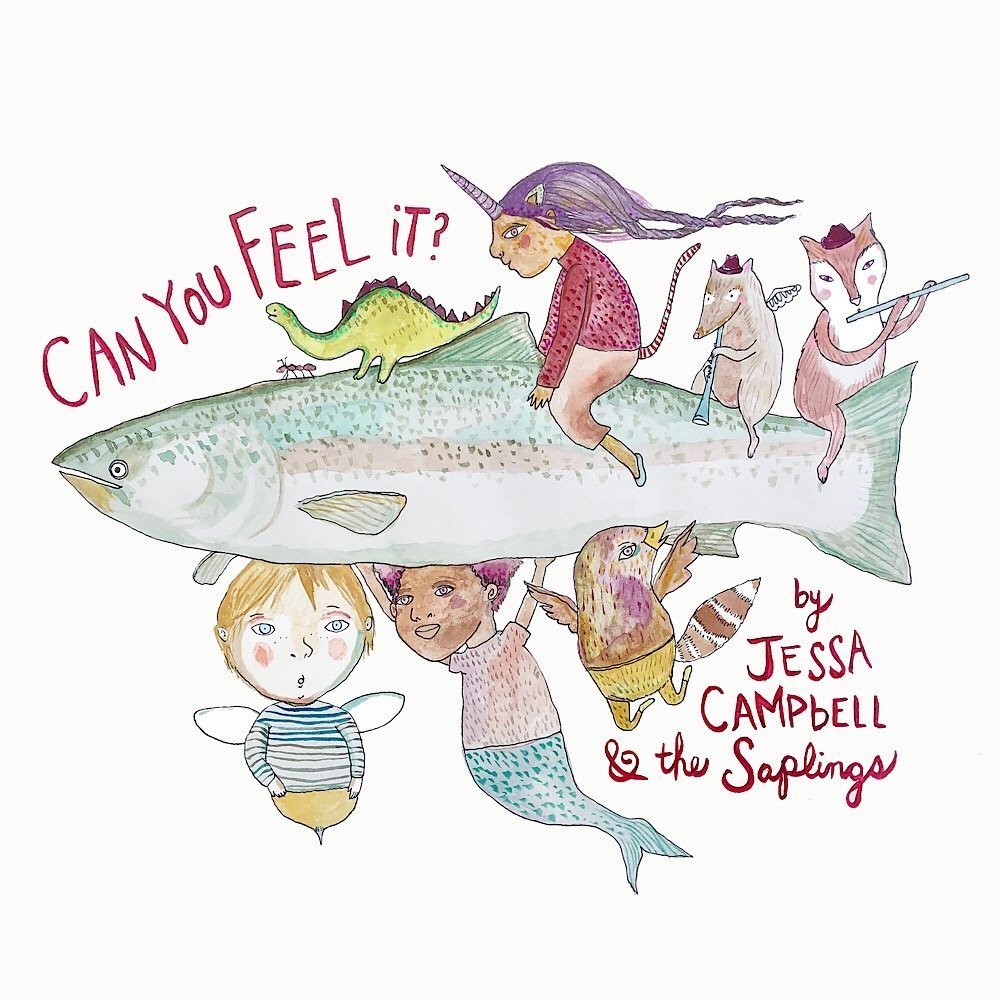 Can You Feel It? is a new album by singer Jessa Campbell who is known as a The Talking Heads tribute band singer in her home town of Portland, Oregon. Now leading her new band The Saplings, she is releasing her first album for kids and families on June 7th. This week, she just released a new music video for the song ‘How I Love You Sun”: https://youtu.be/kBQONBn90iU The single is also newly available on CDBaby: https://store.cdbaby.com/cd/jessacampbellthesaplings3

Campbell is a golden-voiced singer whose musical career spans from “Dragon Tales Live” to opera to theatrical pop. She is proud to present this 10-song album exploring nature and science concepts with story-based lyrics and sing-along refrains. Campbell bridges the worlds of music and ecology by enchanting young audiences with the wonders of nature through her songs. Educators, caregivers and parents can expect a blend of familiar folk children’s songs mixed with original tunes written about what it’s like to grow up in the Pacific Northwest, or anywhere where nature is around us.

The album started as a commissioned project in 2017 when Campbell wrote songs for a “Wonders of Nature” class at the Village Home learning center in Oregon. The science-focused class incorporated music, creative play and movement. Donned in masks and colorful tree-themed costumes, Campbell and the Saplings have since been performing their interactive show at schools, libraries, theaters and clubs around the Portland. Kids will be flapping their wings and stomping like ants at performances planned for this spring and summer.

Jessa recently discussed this album and more via an exclusive interview.

Meagan Meehan (MM): How did you initially get interested in music and how come you decided to turn your focus on kid’s music?

Jessa Campbell (JC): Music was a part of my life right from the start. My father loved bluegrass and would often play his guitar and sing around the home. My younger sisters and I could often be found harmonizing from our respective rooms! Without cable television, we frequently rented musicals from the library. I was mesmerized by the song and dance numbers and would try to emulate them myself.

The first time I remember actually learning a song and singing it for my family was in first grade. Mrs. Williams introduced Raffi’s song, “Evergreen Everblue” to the class. That song instilled in me a desire to protect the planet, while also showing my parents that I had a decent voice! I remember singing it for them at a little family picnic we had in our backyard and seeing the surprised looks on their faces. Noticing my love for musicals and now hearing that I could sing myself, they began getting me involved with community theatre, dance, and vocal lessons.

MM: Do you like creating one genre of music in particular?

JC: I like it all! I was a singer/dancer on Holland America Line Cruises, and performed just about any genre you can imagine! I grew up performing in musicals and operas, but began writing folk-pop music as a teenager. Currently, I sing with the multiple award-winning Hip Hop Band – Eastern Sunz, the Talking Heads Tribute band- LDW, the Knot’s top wedding band- Ben Mallare Entertainment and my original projects. I perform anything from Pop, Folk, Funk, Hip Hop, Jazz, Soul and now kid’s music! I love music to my core and can’t think of one genre that I’d choose over the others! They all speak to different folks. For me, it’s about connecting with the audience, so that changes depending on who is in the room!

MM: How did you go about coming up with the inspiration for “Can You Feel It?”

JC: “Can You Feel It?” began as a commissioned project in 2017 when I wrote songs for a “Wonders of Nature” class at the Village Home learning center in Oregon. The science-focused class incorporated music, creative play and movement. Having developed the curriculum myself for a science class of 5-8 year olds, I also wrote a new song for each class, to further explore the subject matter in a creative way! We learned about seed dispersal, patterns in nature, hibernation, migration, water cycles and more! “Can You Feel It,” the first track, is a story-song told from the perspective of a young salmon, whose upstream urges and growing struggles – transforming from a wee alevin to a small fry and then to a swimming smolt – evoke the irresistible power of nature.  The “Waltz of Trillium and Ant” tells the tale of the symbiotic relationship between the flowering plant and the little insects helping them spread and germinate. The anthemic “How I Love You Sun” offers facts about our solar system’s star. A rousing, blue-grassy arrangement of “Mole in the Ground” is a crowd favorite at Jessa Campbell & the Saplings shows, and the “Shadow Doo-Dah” takes a familiar folk song and turns it into a magical exploration about how our shadows change through the day. Dinosaur obsessed kids will be entranced by “T-Rex in the Forest,” and “Fractals” reflects on the recurring patterns in the world around us. The song “Great Happening” inspires an apathetic world to get back to nature for inspiration and connection.

MM: How much did nature inspire the songs and have you long been interested in eco-friendly initiatives?

JC: Nature IS the inspiration for all the material! I long for the flora and fauna in our bioregion to become household names. I heard once that we can’t protect what we don’t love and we don’t love what we don’t know. My aim is that through song, we might acquaint ourselves with our place of being and make the connections as we experience it outside!  As a child, I used to make up songs to remember topics we might be quizzed on in the classroom. I still sing the times tables in my head to this day! Music can cozily nestle itself into our lives in a way that makes it easy to hold on to what we find important. It also brings us together! Let’s throw the better party!

JC: I’ve narrowed it down to three for various reasons! Of course, I love hearing my three-year-old son sing “T-Rex in the Forest”! We like to sing it when we’re in the car together. His big moment of course is the ROAR! I also love to sing “Can You Feel It”. It comes with some interactive movements that the kiddos can do while we perform. Watching a bunch of youngsters pretend to be hatching Salmon eggs is probably one of the cutest things you can watch! Lastly, I’ve been overjoyed singing and rehearsing “The Great Happening” with the Resonate Choir! This woman’s choir choose my song out from their ‘Homemade Jams’ competition to perform this season. It’s such an honor to hear such a beautiful message lifted up by a choir of incredible women!

MM: How do you plan out your concerts—and wild costumes—and what can attendees expect from live events? Do you encourage the audience to dress up too?

JC: Donned in masks and colorful tree-themed costumes, myself and the Saplings have since been performing our interactive show at schools, libraries, theaters and clubs around the Portland. Kids will be flapping their wings and stomping like ants at performances planned for this spring and summer. We dress up as the characters we sing about! Our banjo player is a Townsend mole, a fellow singer is a bird, and of course we have lots of trees! Our aim is to bridge the worlds of music and ecology by enchanting young audiences with the wonders of nature through the songs. Educators, caregivers and parents can expect a blend of familiar folk children’s songs mixed with original tunes written about what it’s like to grow up in the Pacific Northwest, or anywhere where nature is around us. And of course, we encourage folks to dress up! One of our little fans comes dressed as a Trillium Flower. Her mama helped me create my costume as well!

MM: After this album, what’s next for you?

JC: My goal is to continue partnering with educators like Village Home, in order to make music that is really impacting our kids! I’m currently working on launching a YouTube channel that explores ecology, wilderness skills, science, movement and creative play. Each episode will have a special guest that my character will interview! We have wilderness experts, permaculture designers, hula hoopers, and even a forest school full of students who will share what interests them for the videos.

JC: I encourage my fellow parents to continue doing what it is that lights you up! As a full-time single parent, I wasn’t sure how to do that. It took a little imaging and soul searching to find a powerful way to continue creating music that would encourage and educate my son! We are given such an incredible opportunity to pour into the lives of our children. I’m honored to be Cedar’s mother, and will continue to seek out ways to contribute to his well-being through the gifts I have!

Visit www.jessacampbellsaplings.com and join the Facebook page for the latest updates.

Card Games: Pluck Off! For A Parody Of City Life