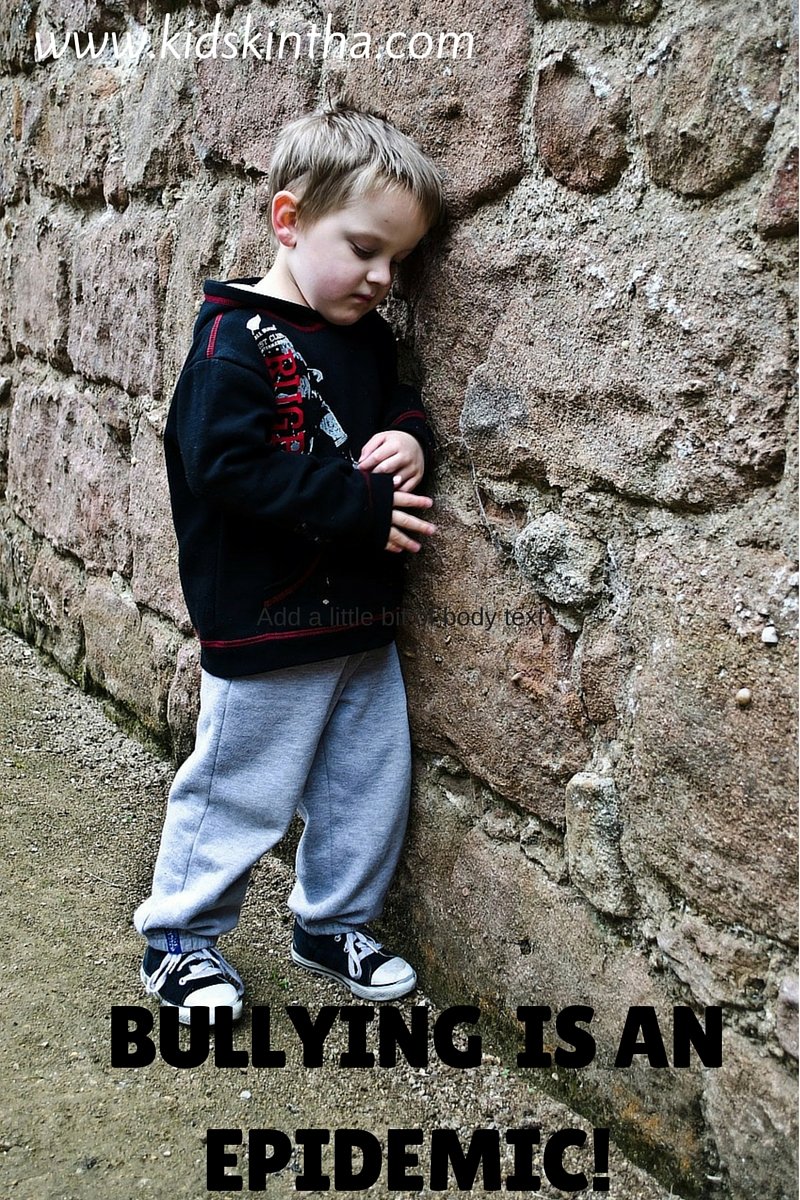 Bullying is an epidemic that the world is fighting hard against!

Don’t believe me? Here are some nice stats on bullying in schools:

Just go ahead and type the word ‘bullying’ into Google and just see the number of ‘Bullying prevention’ campaigns that run across the world.

The UN has recently recognised bullying as an ‘epidemic’ and  dedicated the 4th of May as the UN Anti-Bullying Day.

Now that you are convinced of the scale of the problem(if you aren’t, email me and I will personally send you more data), let’s dive right into some myths- which might be the reason why this has grown to such humungous proportions in the first place.

Myths about bullying in schools:

Myth #1: Bullying is a rite of passage and children will outgrow it.

Fact: Children whose self-esteem plummets due to bullying in middle-school find themselves grappling their whole lives to gain it back, sometimes leading to chronic depression and relationship issues.

Fact: Emotional bullying or bullying for exclusion is the most common taking the form of name-calling, teasing, ridiculing, and deliberate exclusion. For the same reason, boys are mistakenly thought to be more bullied than girls.

Myth #3: Schools hardly have any influence on bullying.

Fact: Schools that had strong “anti-bully” policies and programs in place saw almost a 50% drop in bullying in schools. Interestingly, schools with ‘zero-tolerance’ for bullying don’t do so well. However, schools with anti-bullying policies that focus on positive school climate integrated with social and emotional learning in their curriculum are the ones that showed a difference.

Related: Shaping empathy in children! Why is it important?

Myth #4: It’s easy to spot bullying in schools. With so many campaigns and open awareness programs across the world- we will know when it happens.

Fact: Only 36% of bullying in schools or otherwise is reported by children. The common reasons for not telling parents or other adults are

Myth #5: The ones being bullied are the only victims.

Fact: Bullies need as much help as the victims. In a majority of cases, bullies do what they do because of peer pressure, due to watching similar behaviour by an adult or simply using bullying as a coping mechanism for neglect or trauma.

Bullying in schools clearly is not something that parents or the victims  or educators can fight alone. It requires integrated efforts from the parent, teacher and the educational institution i. e school to counter bullying.

While parents face their own set of challenges to address or even identify bullying in schools, a teacher faces a whole new scenario.

A classroom is a mix of all types and kinds of children. Each one brings home and school experiences that add to the melting pot- their classroom. The diversity is immense. There are differing language, social, emotional, physical and cognitive abilities. For some the learning journey is smooth and easy. For the ones whose capacities are not adequately developed, learning becomes a process fraught with struggles. For example, inadequate language development builds up frustration when a child is unable to communicate his needs. There are an increasing number of children who fall in the spectrum of learning disabilities such as autism. These children find it hard to understand the feelings and emotions of others and face lots of social difficulties. Bullying raises its ugly head somewhere amidst these struggles.

Despite having anti-bullying policies, it is important  for the teacher/educator to re-iterate it in the classroom. Here are some effective strategies:

1. Educate yourself  about types of bullying in schools:

Bullying occurs in many different ways and levels of severities.

Bullying can also occur as a combination of any of these ways.

2. Watch for signs of bullying:

Most bullying in schools takes place in areas that are less supervised by adults, such as on the school bus, in the student cafeteria, in restrooms, hallways and locker rooms. The best we can do is watch for secondary signs of bullying. A classroom is a melting pot and children of varying temperaments come together. Some emotions come to the fore while others get cloaked too easily. We can watch out for the following signs:

Once you smell it, address it. Often times, when little children experience some form of bullying, the articulation of it is the hardest. The manifestations are plenty. 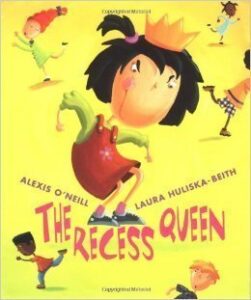 Experiences of the characters in the book may connect with the experiences of a child who is being bullied. Discuss the bully and the victim in the book and help identify the feelings. Make sure the child understands what is bullying and the various forms it can take. “Mean Jean and the Recess Queen” is a great book to get started on the topic.

Bullying in schools can happen anywhere. In the school bus, along the corridors, in the cafeteria…

A recurring bullying behaviour on the school bus was addressed by me through using puppets. In one particular case, I recreated a bullying scenario on the bus and asked open ended question and invited solutions to put an end to inappropriate behaviours.

Young children always need a concrete, tactile example for crystal clear understanding. One of my students had difficulty in managing emotions. The social difficulties were compounded by the arrival of a new sibling at home. A visual of what makes him angry eased his frustration. Using emotion cards helps them to identify their own emotions. 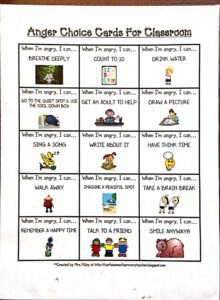 Credits: The anger choice card is available on www.teacherspayteachers.com for free download.

The class rules were always formed using contributions from one and all in my class. These rules were not a one time event. Rather, an agreement that stayed alive throughout the school year. Revisit the essential agreements by recognizing and acknowledging behaviors that children demonstrate. Something on these lines can be created at home to adhere to expectations. Here is a start-

Class jobs are ways of instilling a sense of responsibility in children. Bullying can be quelled by acknowledging desired behaviors through assigning jobs. This can be replicated at home through simple chores like cleaning up toys after playing, making the bed, carrying dishes to the sink etc. It goes a long way in developing self-esteem, responsibility, the ability to deal with frustrations and delay gratification- so

Our school counselor introduced children to Kelso’s choice wheel. Kelso the frog teaches students how to solve problems on their own. It is a neat tool for children to have when confronted with day to day social problems. Kelso makes a clear distinction between big and small problems. My students often referred to the Kelso choice wheel as it acted as a constant reminder for them in the classroom environment.

Yes. It is important to teach kindness.  At school, we celebrated kindness day and made a big deal about it by recording our acts of kindness on the leaves of a Kindness Tree. Teachers and students alike, added the leaves and soon we had a lush green kindness tree abounding with pictures and anecdotes of acts of kindness and caring. Kindness, when integrated into learning, translates to reducing bullying and creating safe environments.

A child’s behaviour and interactions with others is determined by discipline patterns at home. A child exhibiting bullying behaviour could be a target to similar behaviour at the hands of a sibling or a neighbour. Connect with the parents and work as a team to look for signs. Sometimes, it is helpful for parents to undergo self-examination and see if they are contributing to undesirable behaviours in their child, due to their disciplining ways. Involving and engaging parents by keeping them in the loop so we can work towards the same goal by playing the same tune. Sharing your strategies with them  can  address both- the tendency towards acquiring bullying behaviour or falling prey to bullying.

Radha Shivkumar is an early childhood educator with teaching experience in international schools in Vietnam and the American School of Bombay, in Mumbai, India. After 24 years of being a classroom teacher, very recently, Radha shifted gears to assume the role of an educational consultant. In her new avatar, she is hoping to add value to early childhood curriculum and teaching practices by mentoring, coaching and conducting workshops for teachers. She also supports schools in designing curriculum to best meet the needs of the 21st century learner. Over the many years of teaching, she has had many insights, deep reflections and numerous aha moments around how young children learn and develop. Through this blog, she hopes to share those for the benefit of parents of young children.

Social And Emotional Intelligence: Why I Won’t Worry About How Smart My Child Is And Worry About This Instead

The Woman Who Brings India’s First Dedicated Conference On The Power Of Play: Preethi Vickram