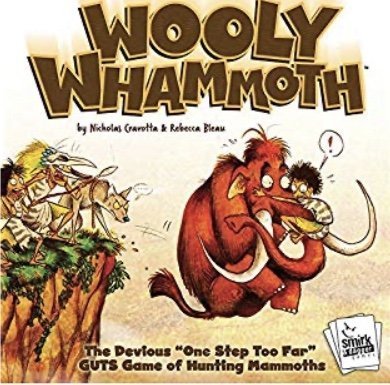 Nick Cravotta and Rebecca Bleau are an award-winning design duo of toys games including “Wooly Whammoth” that lets player assume the role of cavemen.

BlueMatter Games is a company established by Nick Cravotta and Rebecca Bleau. This award-winning design duo has produced toys games including “Wooly Whammoth”—that encourages each player to assume the role of cavemen—and “Piñata Backpack” which was featured on “The Toy Box” reality show.

Nick and Rebecca are founders BlueMatter Games that currently has over 70 products to market. Rebecca is a game designer and fine artist with over 25 years of experience, and the art from her game designs has been used in final production for several games. Nick is a game designer and puzzle lover. Together, they designed the first commercial tabletop Escape Room; a trend has proven exceedingly popular in recent years. Their current projects include building a puzzle loft in their home where the room itself is a puzzle.

Recently, they granted a joint interview where they discussed their experiences designing toys and their future aspirations.

Meagan Meehan (MM): When was BlueMatter Games started and why was that specific name chosen?

Nick: BlueMatter Games was officially started sixteen years, but actually started when I was eight. My brother and I would play a game, and then start messing with the rules. We created megagames merging several boards together. The first BlueMatter game arose when I was playing with my four-year-old son, Skylar. He loved stickers, so we sat at the kitchen counter and he placed stickers on cards while I figured out the combinations. This eventually because our game Acuity, with FatBrain. Regarding our name, if grey matter is the thinking part of your brain, then blue matter is the fun part.

MM: Right now, many games do you offer? What are your age ranges?

Rebecca: We have about 80 products to market. We design everything from little kid games, family games, puzzles, adult games, strategy, party games, and toys.

MM: How do you think up ideas for your games? For example, do you ever work with inventors or is it all you two?

Nick: Our secret to design is…the hot tub. Rebecca and I try to start the morning off in the hot tub talking about how we want our day to look. Often, we’ll start riffing on a theme, and we might have three new ideas before we get out. Because we play into so many different spaces, we are able to be creative in many different ways, which leads to more creativity as the ideas cross pollinate. We also always have a notebook handy. Currently, we have about forty notebooks filled with ideas. At some point, we sift through the ideas for our favorites, make prototypes and playtest, then move to a production prototype for pitching to game companies.

Rebecca: It is typically just the two of us when we start on a specific idea. It takes a while to create a language and processes for sharing and modifying each others’ ideas while keeping ego out of the equation. We design everything together, and do not track who came up with what piece. We understand that even though the words might have come out of one of our mouths, they were fertilized, so to speak, by all the conversation beforehand.

We do work with other inventors regularly. In this case, we show each other ideas and then give feedback. Our exchange is that all feedback belongs to the person who brought the game. We each bring games to the table so we each walk away with valuable insights.

We are currently working on a fairly complex project with another inventor. This is possible because we already had a great relationship before the project started. In fact, both sides were looking for a way to work together. It’s been a delight to work with a different set of brains and approaches to design.

MM: What are some of the benefits and challenges of working as a team?

Nick: Ego can destroy creativity. We leave ego outside when we work as a team. It is always a “we”. We come up with an idea. We bang on the idea to get it into its final form. This isn’t depersonalizing like “There is no I in team.” Far from it. We celebrate the different ways that both of us think. We don’t have conflict; rather, we see differences of perspective as a way to hone in on an even better manifestation of an idea.

Also, we recognize that it is difficult to assess the value of any part of a contribution to an idea. For example, our reconfigurable disentanglement puzzle Houdini, from ThinkFun, was just a mess of ropes when it started. Then Rebecca woke up in the middle of the night and said, “What if it was Houdini who you’re trying to release?” This insight instantly reshaped the concept, solved several design issues, and gave us a great theme. The point here is that the theme didn’t help with the creation of a single puzzle but it did give the product a clarity that really pulled it all together. So, while it was just one statement, it was essential to the design. In the end, would it be worth determining who contributed more to the design? We don’t work that way.

Rebecca: There’s another part of design that we think is important for families with young children to consider. Both of us are what we call Funny-Brained. For example, I am dyslexic and Nick parses words incorrectly. This means we don’t always think the same way other people do. While growing up, this often set us apart from others, quite frequently in a way that was embarrassing or challenging. However, these different ways of thinking are part of our greatest strengths in game design. If we had been taught at an early age to be like everyone else – and believed it – you wouldn’t be reading about us right now.

MM: Your game “Wooly Whammoth” is sold by a company called Smirk and Dagger, so how did you come to partner with them?

Nick: We’ve known Curt since we joined the game industry. We started at about the same time. Curt decided to take the game company route and we took the game design and license route. We have been great friends since. For several years, we’ve dreamed of making a game with Curt. We love the idea of “games are a lot more fun when you can stab a friend in the back.” We love friendly and cooperative games as well, but there is something special about Smirk and Dagger.

Rebecca: We actually designed Wooly Whammoth with Smirk and Dagger in mind. That’s part of our creative process, about half the time. We pick a company for an idea and figure out what we need to do to make it work for them. And that’s what happened with Wooly Whammoth.

MM: What are some of your most unusual games? Which are most popular?

Nick: We are best known for our Escape Room games. Currently, we have three out: Mystery at the Stargazer’s Manor (ThinkFun), which was the first commercial escape room to hit the market, Dr. Gravely’s Retreat (ThinkFun), and MacGyver: The Escape Room Game (Goliath). Our fans will be glad to know that we have several more escape rooms in the works. Our party game, PicWits (Mindware), has been quite popular, and is one of the few party games that a 4 year-old and 84 year-old can play together. This year, PicWits: Silly and Sweet, is coming out. We are becoming well-known for our games for littles. Where’s Baby Bunny? (Martinex) is for 18-month olds and won game of the year in Sweden. Our latest puzzle for littles is Buggzle (FatBrain). Thinking games are a signature part of our designs. Morphy (FatBrain) just won the 2019 Parents’ Choice Gold Award and the 2019 Astra Best Toys for Kids. Yeti or Not! also won the Astra Best Toys for Kids. There’s also our long-time favorite Dizios (Mindware) which has won a slew of awards, including the Mensa Select Award. Puzzles are another key area of our design. Brainwright, for example, has Witchy Kitty where your cat has been messing around with your shape-changing potions, Kitty Kitty single-player puzzle, Monster Mambo mix-and-match memory puzzle with moving monsters, and Pattern Stacker the hidden image puzzle.

Rebecca: Like we said earlier, we design a wide range of games!

MM: Piñata Backpack is awesome! What was photos like to take that product on “The Toy Box” and what was that whole TV experience like?

Rebecca: The process was intense. A film crew came to our studio for a full day and the show only ended up using three seconds of the footage. For the part that was on in the studio, there was a sixteen-hour day of filming. In all, it was a blast.

Nick: Part of what made the program easier for us was that all our dreams weren’t riding on the outcome. This is actually a key part of how we are successful as game designers. We are careful to avoid putting pressure on our games to have to succeed. In other words, we don’t have to sell an idea to a huge company just to stay in our house. We have the freedom to pursue ideas we love and to match them with the right company that can turn them into a beautiful product. Not every idea has to sell a million copies to be successful. In fact, selling a million copies is a myth in this industry just like getting onto the New York Times Bestseller list with a book. It happens, but not often enough to count on.

MM: To date, what has been the most rewarding part of working in the Toys & Games industry?

Nick: We love to play. And we get to share our love of play with the world every day.

Rebecca: This is also an incredible industry to work in. The connections we make with our colleagues and the companies we work with are amazing.

Nick: We look forward to continuing to expand in all directions! We have become known for developing interactive and immersive experiences in a box. We are excited about where we are going to be able to take this as the market continues to accept new play patterns such as escape rooms. We are also excited about creating new ways to plays that extend beyond traditional win/loss and cooperative models. We can’t wait to see what we and other inventors are going to create in the coming decade!