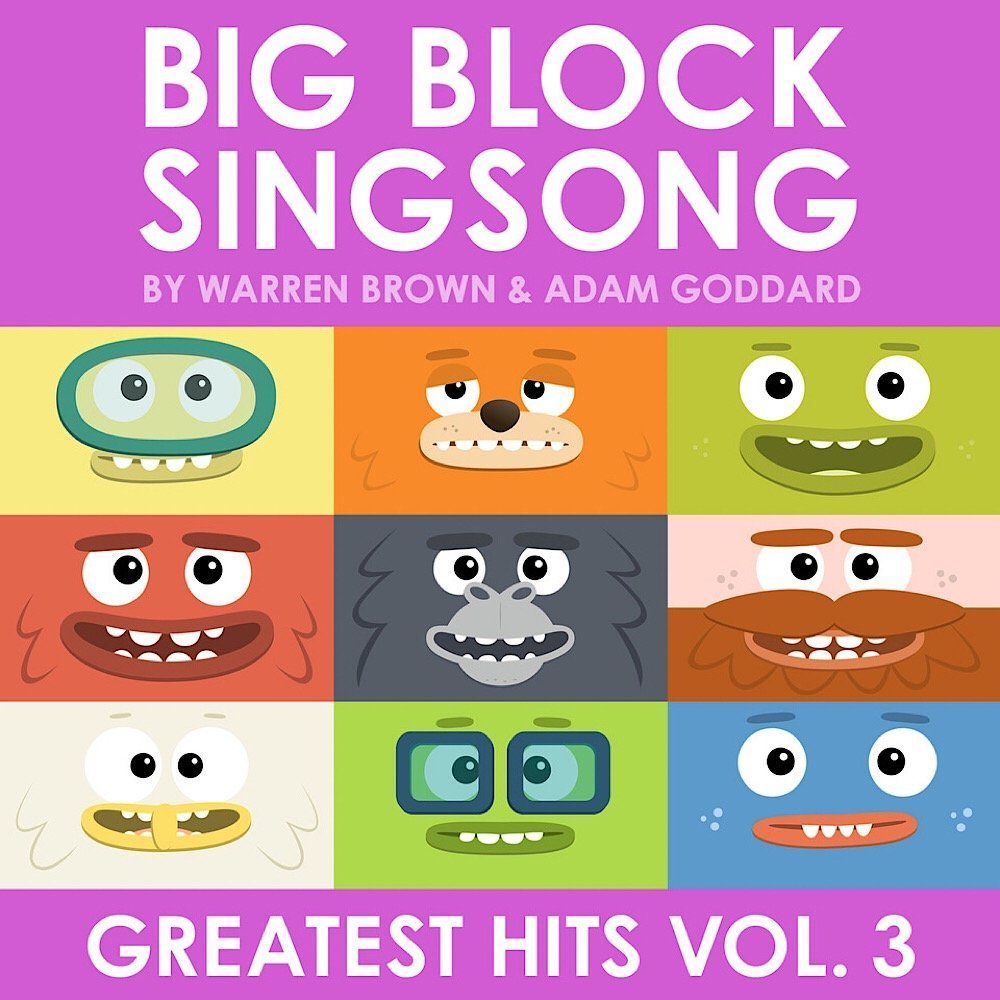 Along with four other nominees in the children’s category, Brown and Goddard presented a selection of their “Greatest Hits, Vol. 3” animated music videos on stage at the Junior JUNOs public event, presented by CBC Kids, at the Vancouver Art Gallery Plaza on March 24. The 2018 Children’s Album of the Year Award winner was Fred Penner, but Adam and Warren report that they had a grand time over JUNO weekend in Vancouver.

“Greatest Hits, Vol. 3” features 20 original songs from the second TV season of Big Block Singsong, which airs on CBC Kids in Canada, Disney Junior in the United States and Nick Jr. in the UK (among other global broadcasters and digital platforms). The 20 animated episodes from Season 2 are now available for digital download on iTunes, Amazon Video and Google Play, and the Season 3 animated episodes and subsequent music album are planned for release in fall 2018. Additionally, an official Big Block Singsong YouTube channel launched in fall 2017.

“Big Block Singsong” is a funny series of animated music videos by director and animator Warren Brown and composer and recording artist Adam Goddard. Hailing from the hometown of Grimsby, Ontario, the duo attended the same preschool but parted ways shortly after. Years later, they reconnected in Toronto and began collaborating on projects combining music and animation. What resulted was “Big Block Singsong,” a TV series with a global audience of young people and their highly amused grownups. The series has been awarded a Youth Media Award of Excellence and a 2015 Big Block Singsong DVD release won a Parents’ Choice Gold Award.

The Toronto-based creators collaborate closely as they create these “bright, in-your-face silly and catchy” (CoolMomPicks) songs and videos. The songs get regular spins on radio shows around North America, including SiriusXM’s Kids Place Live.

Recently, Adam Goddard spoke about his music and more via an exclusive interview.

Meagan Meehan (MM): How did you get into music and how did you start the Big Block Singsong series?

Adam Goddard (AG): As a kid I took piano lessons but also picked up as many other instruments as I could. I played in a band and eventually went to university where I studied classical composition and orchestration. Big Block Singsong started as collaboration between myself and Warren Brown who is a director and animator. We were looking to for a project that brought together music and animation.

MM: What made this series so successful and how is it unique from other collections?

AG: The focus on singing characters seems to be what brings people to the show. Both kids and their parents can enjoy the songs and the animations together.

MM: As musicians, what most inspires you?

AG: I definitely love and listen to all kinds of music and often the style of music inspires where a Big Block Singsong episode might go.

MM: How do music videos enhance these songs?

AG: The characters truly embody the songs. Every song is developed with a character or group of characters in mind.

MM: How do you conceptualize the music videos and have you any favorites?

AG: Warren and I collaborate together on every episode of Big Block Singsong right from the get go.  The characters and the animation are developed at the same time as the song and the lyrics, so the episodes have the character’s personality baked right in.  As for a favorite, it’s impossible to choose, but I’ve always loved “Octopus Pete”!

MM: What was it like to be nominated for a JUNO Award?

AG: Pretty fantastic!  It’s so great to celebrate and connect with Canadian musicians from all genres of music.

MM: What is your latest album like and what were some of the inspirations behind it?

AG: Like all of our Big Block Singsong albums, it’s eclectic. The musical styles are all over the map.

AG: Warren and I are developing more singing characters and musical animations right now. We’ve just released the animated episodes from this album on iTunes in the US. We also plan to release more episodes and another Big Block Singsong album later this year.

More information about the JUNO Award nominees for Children’s Album of the Year is available at the official JUNO Awards website.

Get the scoop on the History of the Earth: Interview with Bestselling Author Christopher Lloyd