Skip to Content
Home / Reviews / Music / Be a Pain: An Album for Young (and Old) Leaders by Musical Artist Alastair Moock 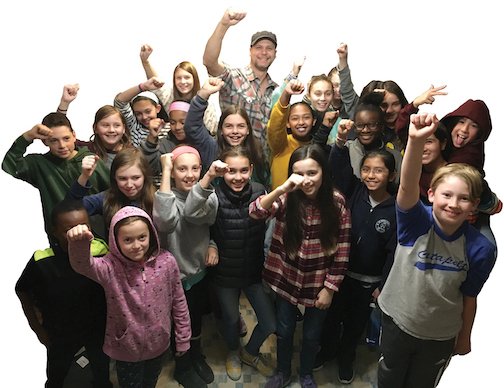 “Be a Pain: An Album for Young (and Old) Leaders” is a new album by musical artist Alastair Moock which was released on April 3rd. It’s available on Bandcamp, Amazon, and Apple Music and Alastair was happy to discuss it via an exclusive interview.

Meagan Meehan (MM): How did you initially get interested in music and how did you come to focus on family music in particular?

Alastair: I started writing songs and performing in college and then moved to Boston in 1995, where I played the open mics and tried to figure out how to do this! I was a touring singer-songwriter for 10 years but, when my twins were born in 2006, I needed to find a new way to perform and stay closer to home. Having kids also gave me a new perspective on how kids think and act. I made my first family album in 2009 and just kept going. I really like writing for the whole family and, over the years, the idea of what that can mean has expanded.

MM: Your new album is called “Be a Pain: An Album for Young (and Old) Leaders.” Can you explain the title?

Alastair: This is an album all about leadership and activism. “Be a Pain” refers to what Civil Rights hero John Lewis calls “good trouble”: Standing up for what you know is right –– whether it’s fighting for civil or LGBTQ rights, demanding equal pay for men and women, or waking people up to the damage we’re causing to our planet. Standing up for what you believe in is something that requires some bravery and also, sometimes, the willingness to make people a little uncomfortable by telling them the truth. This is a concept that all of us, whether we’re adults or kids, can grasp and need to practice if we’re going to keep our country moving in the right direction. This album, maybe more than anyone I’ve made before, was truly made for both young and old people –– it’s an album I hope kids and parents will listen to together and discuss. 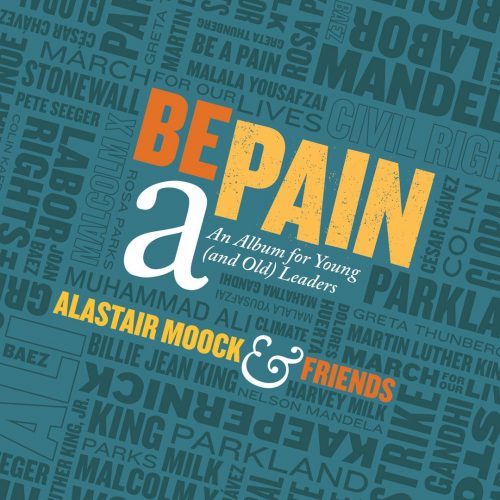 MM: How long did it take to record and complete the album?

Alastair: Maybe six to eight months from the time we started recording. But more like three years from the time I first started trying to write the material. Writing meaningful songs for an audience that includes kids requires figuring out the right “in.” I love that challenge but it can be tricky. With this material, I wanted to write about topics that can sometimes be depressing and cause despair. It’s hard to face up to the unfair ways we often treat each other, or think about what we’re doing to our earth. If I was just writing for adults, I might indulge my darker and more sarcastic impulses. But, when kids are involved, you need to find a way to include energy and hope. A lot of these songs look to heroes of the past –– Dr. King, Rosa Parks, Pete Seeger, Cesar Chavez, Billie Jean King, Malcolm X –– as models to help guide us forward. Some of the songs look to heroes of the present, many of whom are young –– Malala Yousafzai, Greta Thunberg, the Parkland demonstrators –– for inspiration.

MM: How do you hope to promote this release?

Alastair: Obviously, the pandemic has complicated a lot of the traditional ways of doing that. But we’re doing our best! The main thing I can, and want to do, is put the album’s messages into action… Part of the roll-out of the album was a fundraising campaign for the “Be a Pain Education Fund.” Rather than crowdfund for the album directly, I asked fans and friends to donate money which would allow me to give away free copies of the album –– and free enrichment programs –– to underserved schools in the region. We raised over $13,000, which will translate into 13 free programs once schools are back in session.

A few weeks ago, we had a student essay-writing contest based around the album title song –– kids from grades K-8 were challenged to write about a leader in the song video and how their actions have inspired and affected their own life. We had about a dozen really thoughtful entries.

This past week, we launched a video playlist called Quarantunes, which I organized to help raise money for the Massachusetts United Way’s “Covid-19 Family Support Fund.” More than 50 musician friends and colleagues –– many nationally known acts, several Grammy winners, and a few talented kids to boot –– sent in videos which we shared and spread on social media.

Modeling this kind of work is important. If I’m going to sing to kids about leadership and activism, I want to be able to demonstrate those things as best I’m able to!

Alastair: I’m looking forward to getting back to performing and working in schools in person! All this online stuff is fine for now but, ultimately, I’m in a line of work that revolves around direct and personal interaction. I can’t wait to get back up on a stage and help inspire kids to get to work!

To learn more, visit Alastair’s official website or the Be a Pain informational page at http://moockmusic.com/be-a-pain-project/.

Giveaways, In the Media SpotLight