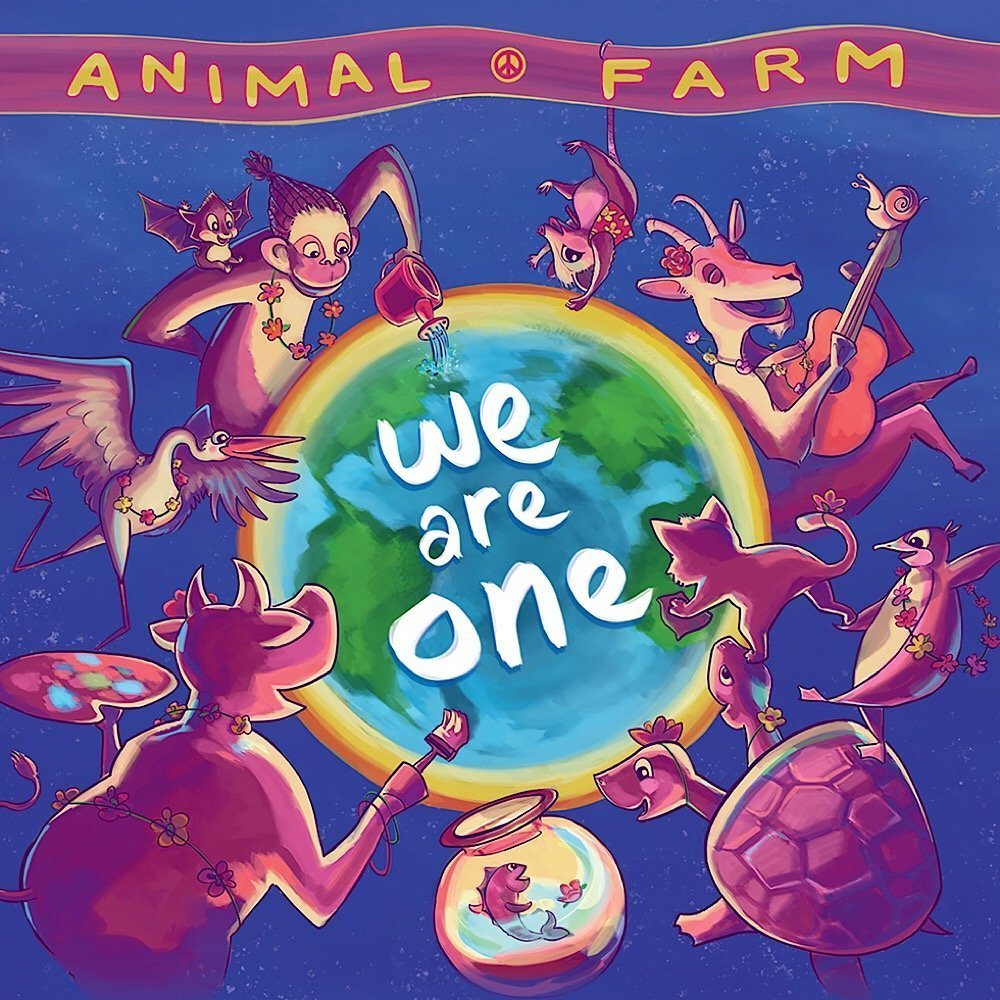 Animal Farm is a popular band that creates family-friendly music. Supercharged with the success of their critically praised debut album, “Run Free” independent family music band Animal Farm is ready to take center stage on the national kids’ music scene with album number two, We Are One, set for release on August 24, 2018.
The message of Animal Farm is all about bringing people together through, like Aesop’s Fables, the use of animal characters.  Whether it’s something humorous like a baby bat who is afraid of the dark or something more serious like a monkey witnessing deforestation, these songs talk about our shared humanity.
Heading up Animal Farm are Chicago-based musician-educators David Ladon and Seth Adams, who met in 2008 while honing their skills as part of Boston’s indie music scene. Driven by a desire to write thoughtful, interesting music for families to enjoy together, they pooled their songwriting and performing talents and began the Animal Farm project in the winter of 2010.
We Are One draws from a range of influences including rock, jazz, folk, Klezmer, Afro-pop, Latin, and Tin Pan Alley, to explore themes of social/emotional learning, self-expression, relationships, and community. The songs are layered, both musically and lyrically, so that younger listeners can sing along to accessible melodies like the chorus of “Awesome Possum” or shout animal noises in “Cranky Pants,” while their older siblings can pick up on the complex ideas and sophisticated wordplay embedded in the material.
We Are One will be available at iTunes, CDBaby, Bandcamp, and other major outlets. The band recently discussed the album and more via an exclusive interview.

Meagan Meehan (MM): How did you initially get interested in music?

David Ladon: Music has always given me an outlet for my energetic personality.  I can be pretty hyper at times and music and the arts have given me a way to channel my energy into a creative outlet.  I started taking private music lessons at five and continued into my 20s.  In my adolescence, singing in a choir was one of the few opportunities to be expressive in school.

Seth Adams: I was lucky to grow up in a family that revered music. My father and brother are both professional musicians. I studied piano from age five, clarinet from age nine, and bass guitar and percussion from age fourteen. In high school I played in garage bands, then got into marching band and drum and bugle corps so that I could perform like a rock star on instruments like the timpani and marimba.  My love of instruments of all shapes and sizes led me to choose the percussion family for my principal instrument in music school.

MM: How did you create your defining sound?

Seth: I think the sound of Animal Farm has been a continually emerging thing, but it’s always been emerging from the same source: me and David getting together and writing songs! Usually one of us is the main songwriter (and David is more prolific than I in that regard), but some of my favorite songs are the ones that were the most synergistic, like “Slow Down (Snail Song)” and “Pause and Think.”

MM: Why did you select the name Animal Farm?

Seth: When we started writing songs together, they all featured animals, and so we thought “Animal Farm” could be a fun name for the project. It was easy for us to imagine a whole farm full of animals, each with their own story to tell or song to sing. Our first album, “Run Free,” was based strongly on that farm imagery, with a lot of Country/Western-inflected songs and even an illustration of a farm scene on the cover. On our new album “We Are One,” it’s a bigger sound and a bigger palette. You could almost say Planet Earth is the farm now!

MM: Your latest album is due out soon, so what are some of the songs on it and what inspired them?

David: “We Are One” is the title track and closes the album.  I have been playing with the guitar riff and chord progression since the early 2000s when I was really just starting to write music.  After stepping back from it for over decade, I sat down and it all came together in one sitting.  When I wrote “We Are One,” I imagined it as a closer for a live show, summing up the ideas and questions we navigate throughout most of our songs.  As the second verse states:

You and I are not so different

Just give yourself the space

To let yourself be human

All the beauty and mistakes

We are pieces to a puzzle

We are slices to a pie

A part of one community

Seth: “Awesome Possum” was a fun challenge because it started with just those two words; I liked the sound of it. So, it led me to ask the question: “Why is this particular possum awesome?” So, instead of his defense mechanism being to play dead, this little guy tries dancing instead. And from a sonic perspective, like the rest of the band I grew up in the ‘90s and I wanted to capture the joy of a simple, fast rock song from that era–something that would actually make kids want to get up and dance their feelings. And usually, it works!

David: “Slow Down” is one of my favorite songs because of how it was written.  Seth was lamenting that he felt creatively uninspired to write songs. I then handed him a guitar (an instrument he does not like playing), instructed him to write a song, and walked away.  When I returned 30 minutes later, he had the bass riff and first verse worked out.  Then I took the guitar and wrote a chorus, which Seth appropriately reigned in (I have been known to write weird music).  We wrote the rest of the song collaboratively.  In the song, a snail reflects on the accelerating speed at which the world seems to be moving. “How can anyone notice this beautiful world if they won’t just slow down?”

Seth: I usually start with the concept, which in most of our songs combines two elements: a particular type of animal, and then an individual character.  What is their story?  Why do we want to know about them?  Many of our characters twist or even subvert what you might expect about that animal.  “Nocturnal Me” is about a bat that is afraid of the dark and “Snowbird” is about “a penguin with a yearning to roam.

David:  I write a lot of music for multiple projects, and what makes Animal Farm special for me is how collaboratively Seth and I write.  There are a few songs on the album that we each wrote on our own, but most of it we wrote together.  I start writing the majority of our songs, but Seth hops in and finishes my musical sentences without hesitation. Even songs that I claim to have finished, he finds ways to improve. And I feel equally as comfortable and confident bringing ideas up about Seth’s songs. Because we share a mutual trust and respect for one another, it’s easier to put ego aside to make the songs better. I think this comes through in the finished product. The music speaks for itself.

MM: Your songs have animal characters, like Aesop’s fables, which is a brilliant idea, but is it tough to write songs that tell stories through animals?

David: As somebody who writes lots of types of music for a range of audiences, I really like having a structure or set of parameters to help shape my writing process. We’ve found that limiting ourselves to songs about animals is no limit at all–we’ve written about forty so far, and we feel like we’ve barely scratched the surface!

MM: Which songs do kids really seem to connect with?

David: At live shows, kids respond a lot to “Cranky Pants” because they get to shout animal noises at the top of their lungs.  It’s pretty amazing to get to lead a chorus of 350 elementary school students through a chorus of hoots, howls, and growls in a space in which they are otherwise expected to be quiet. Kids also love a chance to dance, which we encourage throughout our show but it seems to really hit its peak on rocking numbers like “Awesome Possum” and “The Abyss.”

MM: What can people expect to experience at your live events?

Seth: We are all about making the audience, especially its youngest members, feel included. That means that even if we’re on a big stage with a huge PA system, we still have conversations with the crowd, ask for their input, and invite them to sing, dance, and make animal noises with us. We also have a few sketches and song intros that we like to pepper our set with. Even with all that, though, most of the time at our concerts we are singing and playing the songs that our fans know from our albums.

MM: Are you working on any other projects right now?

Seth: We have a number of music videos that we will be releasing to support the release of We Are One.  Every few weeks, we’ll share something new leading up to the album release on August 24th.

David: We just want to be able to keep doing what we love: writing and performing songs for families. Our community of fans and friends keeps growing, and with We Are One we hope to grow even more.  We have plans of making it to the coasts in 2019, so if you want us to come to your hometown, give us a holler.