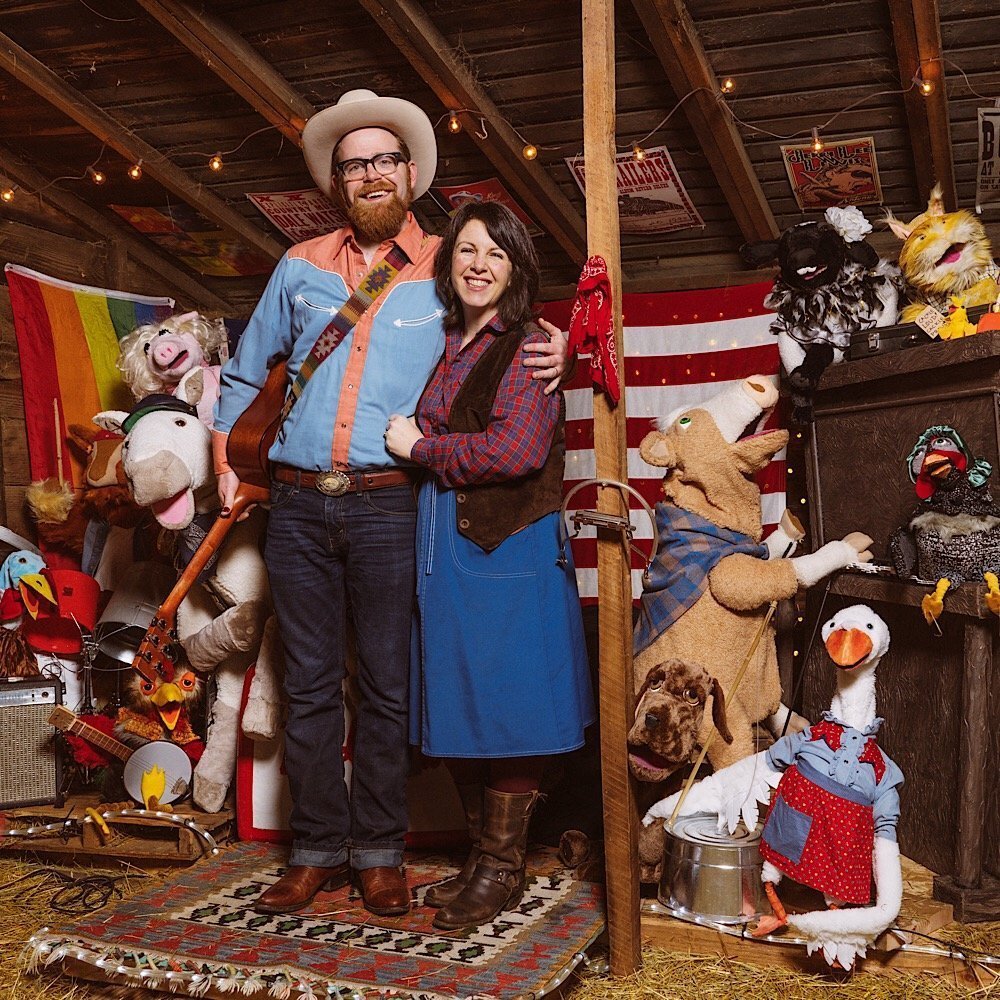 In March, the nationally touring, award-winning artist performed several shows with his family band and music videos, produced on location at an old barn in Oregon, will be released this spring on Red Yarn’s YouTube channel.

With seven originals, four reinterpreted traditionals, and a honky tonk cover song, “Red Yarn’s Old Barn” tells of an epic barn dance where critters of all kinds are welcome. The album is a musical homecoming for Furgeson, reflecting his roots in the Texas Hill Country. He channels his country rock heroes of the ‘60s, the singer-songwriters of Austin in the ‘70s, the alt-country he came of age with in the ‘90s, and the current strain of Americana that sets progressive ideals to old-fashioned sounds.

Red Yarn’s playful and personal country rock songs paint the Old Barn as an inclusive microcosm of the USA. The first track sets the welcoming tone as Red and Miss Jessie invite a diverse band of animals into their ramshackle barn. With an apathetic rooster, an activist hen, a proud horse, a neglected cow, a free-spirited sheep, and a rigid sheriff, the cast of characters represents many sides of American democracy. As the story unfolds, a wild barn dance sparks a disastrous fire. But the community reunites to rebuild, for “it takes a village to raise a barn.”

Red Yarn began his journey into family-friendly folk music with the Deep Woods trilogy, a three-album epic that wove a personal narrative into old American folksongs. But after drawing so much inspiration from songs with Appalachian and African-American roots, Furgeson wanted to dig back into the fertile soil of his home state.

Andy recently discussed his career and more via an exclusive interview.

Meagan Meehan (MM): How did you initially get interested in puppetry and making music?

Andy Furgeson (AF): I was working with kids in an after-school program and playing in a grown-up band on the side. I was inspired by a few performers who visited my program, so I started leading music and storytelling events at the community center where it was based. My then-girlfriend, now-wife, Jessie joined me and we created a low-key kids band called Jelly Jar. We built a few sock puppets for our shows and I caught the puppetry bug. When Jessie started grad school, I created Red Yarn, and it’s all grown from there.

MM: Who are some of your puppet characters?

AF: I have a whole new cast of barnyard critters to go along with the new album. I built many of my original Deep Woods puppets, but as this job has become busier, I’ve relied on other, more talented builders. I commissioned some of my awesome puppeteer friends in Portland – Faerin Milllington, Matthew Hopkins, others – to build the new characters, like an activist chicken named Henrietta, a chanteuse sheep named Wooly Mae, a DJ horse named Bill, a lazy rooster named Rousseau, and a sweet pig named Percy, to name a few.

MM: How did you break into the children’s music industry?

AF: After a year of working at the after-school program and building Red Yarn on the side, I decided to go full time with this work about six years ago. I started with local venues and schools, and over time I’ve branched out into more national touring. When I started releasing albums, that connected me to the bloggers and DJs who support this genre. Meanwhile, I’ve built relationships with amazing colleagues all over the country, sharing stages on the road and inviting touring bands to perform in Portland. The “children’s music industry” is so welcoming and collegial, so it’s been a pleasure to be a part of it.

MM: How many songs have you created and which are your favorites??

AF: My first few albums were mostly made up of my adaptations of traditional American folksongs. With each album, I’ve introduced more original material. Red Yarn’s Old Barn, my fifth album, features seven original songs, four adaptations of traditionals, and one cover song. I have some songs that work best as recordings, and others that lend themselves more to live performance. Hard to pick favorites, but the songs I perform the most live are “Bile Them Cabbage,” “Hop Little Squirrel,” and “Rabbit in a Log.” From the new album, “Barndance” has become a live staple. “Go Little Gator” is probably my favorite recorded song on the new album.

MM: How much creative control do you have over your music videos?

AF: A lot! I produce all my own music videos and collaborate closely with filmmakers, my art department and puppeteers to get the look and feel I’m imagining. We end up improvising some of the shots as we go, but we’re always working within a concept we’ve developed in advance. For the new video, “Old Barn,” I worked with director Laki Karavias to come up with the basic idea, then once we got on location with the puppeteers, we figured out what was possible. A lot of care goes into decorating the sets, building the puppets and props, and adding layers of detail and to create a rich viewing experience for all ages. I’m lucky to have a talented community of artist friends that bands together to make these video shoots possible.

MM: What can people expect from your concerts and do you enjoy touring?

AF: We put on high energy shows that weave together music and puppetry. We ask for a lot of participation from the audience, leading singalongs, guiding movement, getting the crowd to stomp and clap along. A central part of our mission is to reinvigorate old folksongs for young audiences, so we try to make our versions as memorable and engaging as possible. I do a lot of solo shows around Portland with just guitar, my stompin’ boots, and a suitcase full of puppets. When we tour further out, it’s often with my wife and singing partner Jessie, who livens things up with her banter and energy. We usually bring our two young children on tour, which is both fun and challenging. I enjoy touring but am also happy to perform a ton close to our home base in Portland.

MM: What is it like to work alongside your wife?

AF: It’s very rewarding, but not without its complications. Singing and performing together comes very naturally, as we’ve been doing it for ten years now. But like any married couple, we occasionally get annoyed with each other… ha ha ha. Jessie has another career as an educator in an alternative school, on top of mothering two young kids. So, she’s incredibly generous to give as much time as she does to Red Yarn. Her contributions bring so much heart to the project and help us connect to other young families interested in building creative community.

AF: I am so happy to have built a career with my music and art that also allows me to connect with my local community, to spend lots of time with my family, to travel to interesting places and to work with other amazing musicians and artists. So, my biggest goal is to sustain my career without losing sight of the communities that supported it in the first place. But I also hope to keep releasing better and better albums, to keep building this world of puppet characters and stories, and to collaborate with a wider and more diverse range of artists. A TV series would be dreamy of course…

AF: Thank you for taking interest in my project and spreading the word!

Please visit www.redyarnproductions for links and details about upcoming Red Yarn concerts in Portland and beyond. “Red Yarn’s Old Barn” can be purchased on Amazon here. To watch a new music video for the song “Old Barn,” see here.

Children talk the most when they are playing: Interview with Dr. Erik Fisher